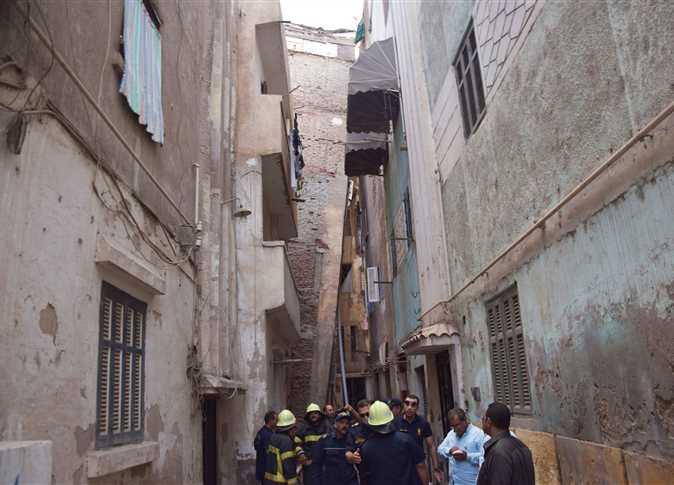 A 10-year-old child was killed and three others injured in the city of Mansoura on Wednesday after a five-story building toppled over to lean on an opposite building.

Governor of Dakahleya Ahmed al-Sha’arawy and head of Dakahleya Security Directorate Ayman al-Mallah, are among government officials who inspected the area of the incident. Security forces cordoned off the area to prevent people approaching the scene until the building is demolished.

Sha’arawy ordered that five adjacent buildings be evacuated, and organized shelter for affected families in al-Nasereya Sporting Club. He also arranged for the disbursement of urgent compensation of LE11,000, and the expenses of daily subsistence for each family equivalent to LE100 pounds a month.

In a statement to Al-Masry Al-Youm, Sha’arawy said that this building was part of the plan to monitor dilapidated residential housing. An inspection found that it was about to collapse and was endangering the neighboring buildings.

He added that a demolishing order was issued, and its owner was informed through the police department on October 4 to evacuate and implement the decision to remove it, but the residents refused and the owner failed to implement.

“We will begin immediately to remove the building and examine the cause of the collapse by a specialized engineering committee, and a report will be made to understand what happened and prevent its recurrence,” Sha’arawy said.

Firefighters have evacuated five adjacent buildings, where 22 families were living. The Social Solidarity Directorate will help provide shelter for them.

The owners of the apartments in the building gathered around the governor and demanded that he provide alternative apartments for them, as they are now stranded, and declared their refusal to stay in the tents set up by the governorate for them.

“I was sleeping and woke up to find the refrigerator moving and the bed tilting,” said Hamdi Daoud, who lives in the fourth floor of the building. “I was surprised by the house leaning strongly. I threw myself from the balcony (to the opposite building). My wife was out and when she returned with my daughter she found me in the street,” he said.

“I put all my savings in this apartment and I do not have anything to buy another apartment,” Daoud said.

“I left my apartment at 6 am, and after half an hour I received a call that the house was leaning. I ran back and found the house leaning on the opposite building and its entrance was swallowed up by the ground, and we could not enter it again and all that I had is locked inside,” said Saneya Mohamed, a resident of the building.

A team from the Mansoura Prosecution office inspected the scene, and looked at the property from both directions, to find out the causes of the landslide, which led to the fall of the first floor under ground, and then the leaning of the building. The prosecution team also visited to Mansoura International Hospital to take testimonies of the injured in the incident.

The prosecution ordered the arrest of the owner of the building as well as the summoning of the district chief and the director of the engineering department for them to be held accountable for the collapse.