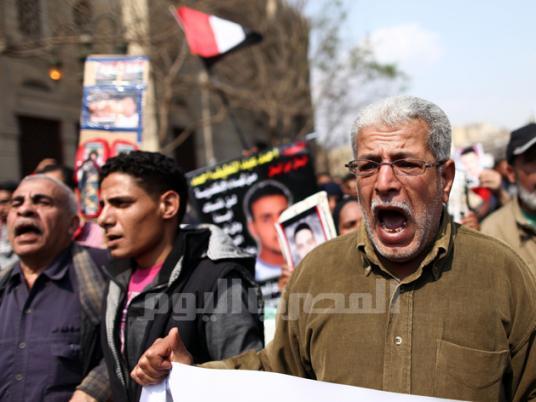 More than 34 parties and political movements called on Egyptians to participate in a protest Friday under the title “No to Writing the Constitution Under Military Rule.”

The protest also calls for canceling Article 28 of the Constitutional Declaration, which grants the Presidential Elections Commission immunity against challenges to its decisions.

On Wednesday, the groups issued a statement in which they called for entrusting an independent judicial committee with supervision of the elections. They also called for canceling an article of the Constitutional Declaration that allows the Supreme Council of the Armed Forces to reject laws issued by the People’s Assembly.

The statement also called for holding revolutionary trials of the killers of protesters during the 25 January revolution and holding former regime figures accountable for their actions, rather than only isolating them from political life.

They also called for entirely abolishing the state of emergency and retrying civilians who were subjected to military trials.

The statement accused the Muslim Brotherhood of allying with the military against the rest of the people. It held it responsible for “dragging the revolution backwards.”

“Our battle is to continue the revolution and protect it from the enemies of the nation,” the statement read.

The movements also rejected news reports saying the Supreme Council of the Armed Forces is inclined to prolong the interim period.

The statement accused the military council of leading a counter-revolution to break up the ranks of Egyptians, citing the referendum on constitutional amendments and the parliamentary elections — which produced an “incapable” Parliament — as examples.

The statement was signed by the 25 January Revolution Youth Coalition, the April 6 Youth Movement Democratic Front, the National Association for Change, the Revolutionary Socialists, the Free Front for Peaceful Change, the Adl Party, the Alliance of Egypt’s Revolutionaries and the Union of Revolutionary Youth.