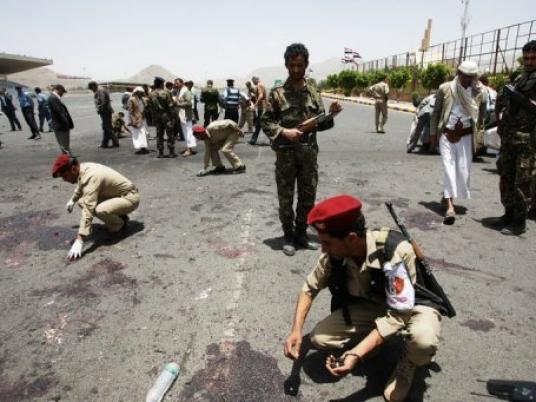 Monday, killing 96 troops and wounding around 300, a military official and medics said.

The suicide attack was the deadliest in the country's capital since newly elected President Abd Rabo Mansour Hadi pledged to oust Al-Qaeda militants from Yemen's mostly lawless and restive southern and eastern provinces.

Medics, speaking on condition of anonymity, said the casualties were being treated in seven hospitals across Sanaa. All the dead and injured were soldiers, they added.

Yemeni police officer Colonel Abdul Hamid Bajjash, in charge of security at the blast area, said the attack "bears the hallmark of Al-Qaeda."

The unidentified bomber detonated his explosives as soldiers from the government's central security forces, commanded by a nephew of former president Ali Abdullah Saleh, rehearsed for an army parade to mark the 22nd anniversary of the unification of north and south Yemen, according to the military official.

Yemen's defense minister, Mohamed Nasser Ahmed, was present at the time of the explosion but escaped unharmed, the official added.

Witnesses said human remains were scattered across the site of the blast at Sanaa's Sabeen Square, where the Yemeni government often holds large military parades.

An AFP correspondent said dozens of ambulances rushed to evacuate the dead and wounded, as security forces cordoned off the area.

Monday's attack is Sanaa's most deadly since Hadi took power in February with a pledge to fight Al-Qaeda's growing presence in the county.

Hadi, who was elected in a single-candidate vote as stipulated by the Gulf-sponsored transition deal that forced Saleh's ouster, was expected to give a speech at the military ceremony scheduled for Tuesday.

It remains unclear if the parade will take place as planned.

The suicide bombing comes 10 days into a massive army offensive against Al-Qaeda in Yemen's restive southern Abyan province, where the jihadists have seized control of a string of towns and cities in attacks launched since May last year.

The offensive followed days after the White House announced that a plot by Al-Qaeda in the Arabian Peninsula (AQAP) to blow up a US airliner had been foiled.

Yemen military and tribal sources said Monday that 11 Al-Qaeda fighters and three Yemeni soldiers were killed in the latest fighting around the southern city of Jaar.

The clashes during the night took place mainly at the city's western entrance, a military source said, adding that 17 soldiers were wounded in the clashes.

In a separate incident Monday, Al-Qaeda militants attacked a Yemeni military base in Wadi Hassan, east of Zinjibar, killing seven soldiers and wounding 23 others, military officials and medics said, adding that fierce fighting also erupted northeast of the city.

Since the offensive began, 234 people have been killed, according to a tally compiled by AFP, including 158 Al-Qaeda fighters, 41 military personnel, 18 local militiamen and 17 civilians.

Residents and tribes in the area surrounding Jaar have formed armed militias, Popular Resistance Committees, to back the army, similar to those formed in other Abyan towns — Loder and Mudia.

According to Western diplomats in Sanaa, US experts have been advising the Yemeni army in combat.

On Monday, Al-Qaeda militants claimed they raked with gunfire a convoy carrying four US military advisers in Hudaida, but American officials said they had no such personnel in the west Yemen port city.

The jihadists said in a statement that gunmen had opened fire on Sunday on two cars carrying four American military advisers who were in the Red Sea city on a training mission with the Yemeni Coast Guard.

The militants "opened fire on them as they left their hotel on their way to work," the statement said, adding that the attackers were able to flee despite efforts by Yemeni security forces to cordon off the city.

The US embassy in Sanaa however denied the presence of American military advisers in Hudaida.

"Reports of US military trainers in Hudaida are false," an embassy email said.