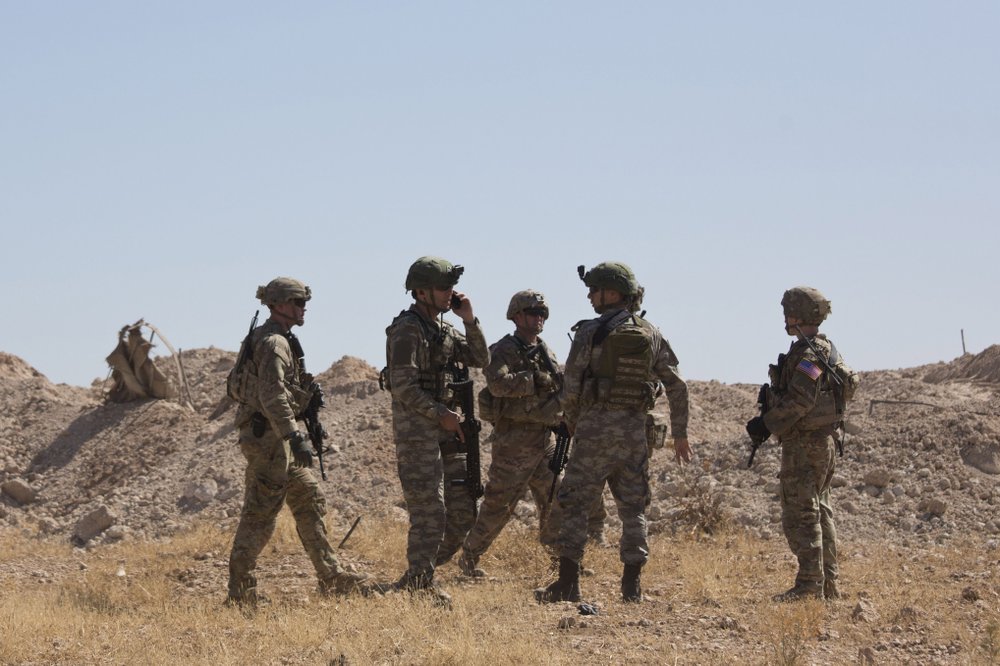 BEIRUT (AP) — President Donald Trump’s announcement that U.S. troops in Syria would step aside to make way for a Turkish military operation against U.S.-allied Syrian Kurdish fighters unleashed a torrent of near unanimous criticism and warnings of immediate and long-term negative consequences.

That’s because the region of northeastern Syria, where the Turkish president intends to launch an operation to carve out a so-called safe zone, is one of the most combustible in Syria’s long-running civil war.

A U.S. troop withdrawal and Turkish assault on the area risks re-igniting fighting in a corner of Syria only recently stabilized and where sleeper cells of the Islamic State group continue to operate.

It also risks creating a new wave of displacement in an area that is home to hundreds of thousands of people, many of them already displaced by previous bouts of fighting.

Here’s a look at the various players and what they want:

Kurds make up 10 percent of Syria’s pre-war population and were an oppressed minority before the country’s conflict started in March 2011. Their presence is concentrated mostly in northern Syria.

After President Bashar Assad’s forces abandoned areas in the north at the height of the war to defend areas closer to his seat in Damascus, the Kurds slowly carved out a semi-autonomous region and gained a degree of independence previously unthinkable. After the emergence of the Islamic State group, the U.S. chose the Kurdish fighters to partner with on the ground. The Kurdish-led Syrian Democratic Forces became the main U.S.-backed force in Syria in the fight against IS.

In March, the SDF captured the last sliver of land held by the extremists, marking the end of the so-called caliphate declared by IS’s leader Abu Bakr al-Baghdadi in 2014. It lost 11,000 fighters in the process.

The Kurds now control an area estimated to be a bit less than 30 percent of Syria, most of it territory with overwhelmingly Arab populations, outside the traditionally Kurdish-majority areas.

Turkey refers to the stretch of territory run by the U.S.-allied Syrian Kurdish fighters as a “terror corridor” and calls it an existential threat.

This is because the main Kurdish group there, known as the People’s Protection Units, or YPG, is linked to the outlawed Kurdistan Workers Party, or PKK, which has waged a 35-year old conflict against the Turkish state that has left tens of thousands of people dead.

The incursion aims to clear Kurdish fighters from a strip of border territory running east of the Euphrates River to the border with Iraq. Turkey says that once secured, the area would become a “safe zone” allowing the repatriation of some 2 million of the Syrian refugees now on Turkish soil.

That would cover most of the territory where the bulk of Syria’s Kurdish population lives.

The incursion would be Turkey’s third into Syria. In August 2016, Turkish troops moved into a zone in northern Aleppo province, driving away Islamic State militants and Kurdish fighters. In January 2018, Turkish troops took control of the Syrian Kurdish run enclave of Afrin in northwest Syria. Turkey also maintains troops in Syria’s northern Idlib province to oversee a so-called conflict-free zone there.

America maintains some 1,000 troops in Syria who work alongside the Kurdish fighters. Trump, in line with his focus on ending American overseas entanglements has wanted to pull them out from Syria to make good on key campaign promises. He announced a withdrawal in December but was met with widespread condemnation for abandoning Kurdish allies to the Turkish assault.

America’s foes — Assad, Russia, and Iran — all stand to gain from a U.S. troop withdrawal and will likely bide their time until they can move in and retake the area. With their help, Assad has recaptured most of Syrian territory except for the north and east.

Iran and Russia are both key allies of Assad’s government with troops on the ground in Syria. While they may publicly oppose a Turkish incursion into Syria, they probably don’t mind an operation that diminishes the Kurdish forces.

Some of Turkey’s incursions into Syria appeared to have been coordinated with Russia and Iran as part of a quid pro-quo. In 2016 when Ankara launched an offensive against the Islamic State group west of the Euphrates river, Syrian government forces captured rebel-held parts of the northern city of Aleppo, Syria’s largest and once commercial center.

After last year’s capture by Turkish troops of the Kurdish enclave of Afrin in the north, the government captured rebel-held eastern suburbs of Damascus known as eastern Ghouta, boosting security around Assad’s seat of power.

FILE – This Sept. 8, 2019 file photo, Turkish forces survey the so-called safe zone during their first joint ground patrol with U.S. forces on the Syrian side of the border with Turkey, near Tal Abyad, Syria. The region of northeastern Syria, where the Turkish president intends to launch an operation to carve out a safe zone, is one of the most combustible in Syria’s long-running civil war. A U.S. troop withdrawal and Turkish assault on the area risks re-igniting fighting in a corner of Syria only recently stabilized and where sleeper cells of the Islamic State group continue to operate. (AP Photo/Maya Alleruzzo, File)

Kurds mobilize in Syria as Turkey poised for imminent attack