The suspension of communication services during the January 2011 uprising was a response to an Israeli hacking of a local cell phone network, former Interior Minister Habib al-Adly’s defense attorney said Thursday.

Lawyer Mohamed al-Guindi made the argument during a trial session for the former minister who, along with former President Hosni Mubarak, and six former security officials, faces charges of murdering protesters during the uprising that ended Mubarak's rule last February. The court adjourned the session until Saturday, when it will hear other defense lawyers.

During the massive protests, security officials ordered service providers to cut mobile phone and internet services, a move that was widely viewed as an attempt to deprive demonstrators of a means of communication. But Guindi told the judges that security and intelligence apparatuses made the move after discovering that Israel had penetrated one local cell phone network to spy on Egypt.

The lawyer accused prosecutors of bias in their investigations and blamed a "third party" for killing protesters.

Adly's defense lawyers also questioned the authenticity of video footage which activists circulated as evidence against Central Security forces. They said they have not seen the clips and are unsure whether they were filmed in a legitimate way. They demanded to review them and discuss them further.

State-run Al-Ahram newspaper's website said Guindi alleged that security agents at the American University in Cairo shot protesters in Tahrir Square and denied that police hold any responsibility for the killings. The lawyer also accused the university of withholding footage of the events.

The university denied the claims in a statement Thursday, noting that its security agents are never armed and that it does not have security cameras at its Tahrir campus that could have recorded the events.

Plaintiffs quarreled with Guindi after he said Adly was innocent of all charges.

At least 800 people were killed during the 18 days of protests that toppled Mubarak, and more than 6,000 were wounded by live ammunition, rubber bullets, water cannons and batons, among other weapons.

In May, an administrative court convicted Mubarak, former Prime Minster Ahmed Nazif, and Adly of violating freedom of expression and communication by ordering the blackout. The court fined the defendants LE540 million.

The Supreme Administrative Court is scheduled to meet on 2 April to consider their appeal. 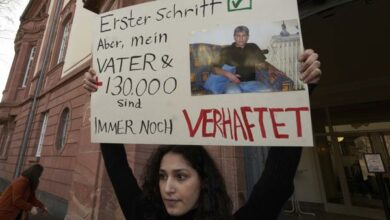 For victims, Syria torture trial is 1st step toward justice