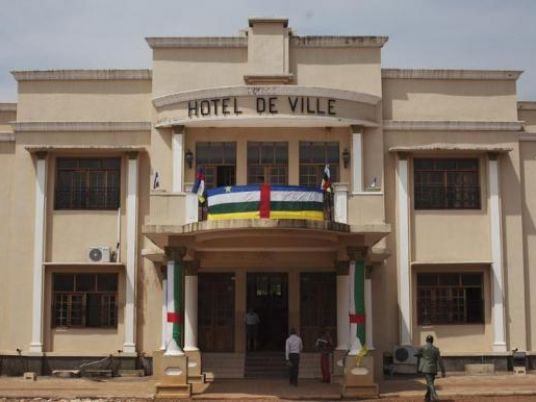 African peacekeepers shot dead a protester in the capital of the Central African Republic on Monday, a killing likely to exacerbate tensions in the country where UN-mandated troops are struggling to stem sectarian violence.
The Chadian soldiers opened fire on stone-throwing protesters who accused them of complicity with rebels in the strife-torn country, according to AFP reporters on the scene.
Several hundred Christian demonstrators had massed outside Bangui airport to call for the departure of President Michel Djotodia, a former rebel who became the first Muslim leader of the majority Christian nation after a March coup.
They were also demanding the departure of Chadian troops within the African Union's MISCA force that, alongside French forces, is battling to restore order in the country.
Many in the mostly-Christian capital Bangui accuse Chad of masterminding the Seleka rebellion behind the coup that has unleashed waves of violence.
When two 4X4 vehicles with AU troops from Chad approached the demonstrators, the latter started throwing rocks in their direction.
The soldiers responded by firing their weapons in the air and towards the crowd, killing at least one person and wounding another, according to AFP reporters.
French troops quickly intervened to evacuate the victims.
“We ask for our rights and we get killed. There are too many abuses, we can't take it any more,” charged one demonstrator after the incident. “The Chadians are terrorists.”
“They are killing us like animals,” said another distraught young woman. “We don't want these Chadian MISCA troops.”
Chad's President Idriss Deby Itno has long been kingmaker in the CAR, and while Chadian troops are only one component of the 3,700-strong MISCA, African commanders admit that they have been following their own agenda.
Djotodia was the leader of the mostly Muslim Seleka coalition and although he disbanded the group after the coup, some members went rogue.
Months of killing, raping and pillaging followed, sparking international warnings of a major humanitarian crisis and prompting Christians to form vigilante groups.
Chadian and Sudanese mercenaries within Seleka ranks are blamed for many of the worst crimes against the population.
As a consequence Christian reprisals have been targeting Chadian nationals, along with Muslims and people from the country's north, all seen as complicit with Seleka.
France has deployed 1,600 soldiers to its former colony alongside the MISCA force.
The French intervention has been largely welcomed by the Christian majority but many Muslims argue operations against the remnants of Seleka have left them exposed to reprisals.
Amnesty International says an estimated 1,000 people have been killed since December 5, mostly by ex-rebels but also in Christian reprisals.
Skirmishes resumed on Thursday after a lull of a few days, with sporadic violence in several districts of the capital and tensions running high.
On Sunday several thousand Muslim supporters of Seleka protested in Bangui against French troops, a demonstration that swelled after three ex-Seleka fighters were killed in clashes with French soldiers.
The French army said the men were preparing to shoot at its troops.