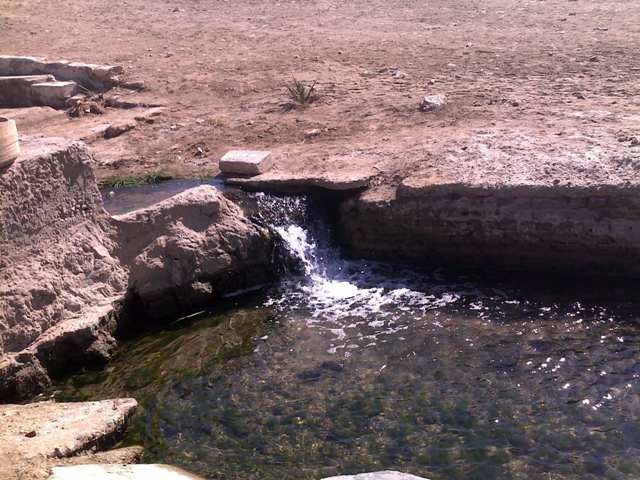 Old books describe Helwan, a southern suburb of Cairo, as “the sacred healing city” — one of Egypt’s main centers of therapeutic tourism since the pharaonic era.

Any book that mentions the medical healing value of Helwan has a description of Ain Helwan or Kabrittaj Helwan as marvelous places containing several unique sulfurous and mineral springs that flow 24 hours a day and have therapeutic powers. These traits made the place one of the main destinations for millions of tourists from all over the world.

But going to Helwan’s springs today will ruin all of your expectations. The place has turned into a barren wasteland where stray animals frolic. It was neglected by the government for more than 10 years, until it completely lost its archaeological and medical value and reached the worst levels of regression.

Ain Helwan was first discovered by the ancient Egyptians, who called it “Ain-An” and considered it a grace from the gods. It was rediscovered in the era of Khedive Abbas, when many of the soldiers were infected by scabies, a contagious skin infection, after one of the soldiers found the springs by chance.

When Khedive Abbas learned about the springs, he ordered the school of medicine to analyze them. When they were discovered to have healing powers, he ordered the establishment of Helwan’s sulfur baths.

Springs still exist at the Ain Helwan therapeutic garden, but the entrance gate doesn’t even have a sign with the name of the place, let alone any explanation of its history and value.

Pipes that pump underground water to the surface are rusty and make the flowing water unfit for consumption. All of the taps from which the mineral water should flow are broken, so visitors have no choice other than going inside the well to get some water.

The neglect and absence of governmental supervision over this place naturally opened the way for corruption and encroachment. Some contractors and businessmen have appropriated the garden’s land to build blocks of flats, even though it is state-owned land, Mohamed Abdo, an engineer and the administrator of the Ain Helwan garden.

Contractors broke some of the walls that surround the garden and used large excavators to dig a 20-meter-long road to serve people living in their buildings, actions which Abdo said would cost the country more than LE20 million. Abdo said he filed many lawsuits against those contractors, but nothing has changed.

The garden’s land isn’t the only thing that was left open to violations.

“More than half of the amount of mineral water that flows from the springs is wasted on filling the swimming pools of the resort that is built close to Ain Helwan garden,” said Amir Ali, one of the guardians of the Ain Helwan therapeutic garden, referring to Al-Waha resort.

He said the spring water is pumped underground to the pools, and that the rest of the water goes to waste.

“These water springs had a magical power to treat many kinds of diseases, such as rheumatism and rheumatoid arthritis as well as liver, kidney and skin diseases,” Ali said. “Although these water springs have in the past attracted the attention of international researchers and chemists who came to Egypt to study Helwan’s sulfurous and mineral water springs, most Egyptians know nothing about them.”

The Planning and International Cooperation Ministry allocated LE4 million for the construction and repair of the Ain Helwan garden in 2010, but work has not yet started. The former governor of Helwan had also ordered Helwan University to study the area and make a plan for reviving and developing it, under the supervision of the vice president of the university.

Many professors came from the university to study the gardens and examine the components of the water, and some plans were made and sent to the governor.

“After Helwan governorate became a part of Cairo governorate in 2011, these papers and plans were lost,” said Abdo.

Moving to Kabrittaj Helwan, located a few kilometers away, the picture isn’t any better. Kabrittaj Helwan was known as one of the main destinations for people with chronic and intractable skin diseases, who would attempt to cure themselves in the springs’ bathing area.

The Tourism Ministry and the Czech Republic had agreed in 2008 to develop and revive Kabrittaj because of the therapeutic value of its springs, which contain a high percentage of sulfur. Unfortunately, no subsequent improvements were made, and it ultimately closed after some people drowned in the bath.

A medical center linked to the Kabrittaj called the Helwan Sulfur Center for Rheumatology and Physical Medicine — considered the only center in Egypt that treats people using only sulfurous mud and water, the center says — is still open and offers service to hundreds of patients every year.

For Ibrahim Mohamed, a 50-year-old doctor who has lived in Helwan for more than 40 years, the therapeutic waters have a lot more potential.

“My father and my grandfather used to tell me stories about Helwan springs and its great influence on the people’s health in the past,” Mohamed said. “I think that Helwan itself could qualify as the most important therapeutic city in the world, and it could also save millions of pounds each year that are spent on treatment and medicines.”