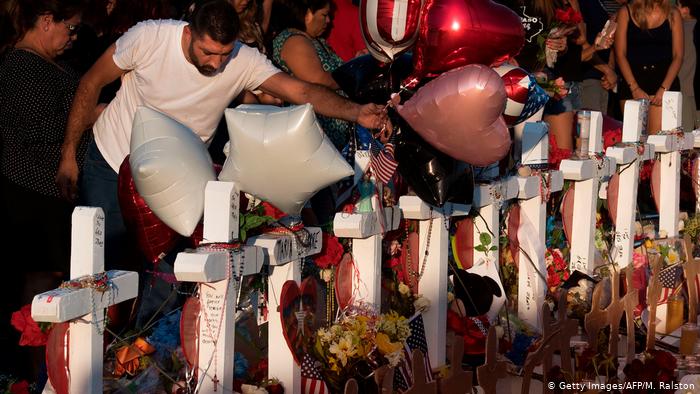 Human rights organization Amnesty International issued a travel warning for the US on Thursday, citing “rampant gun violence” in the country.

Amnesty said the US government was guilty of “prioritizing gun ownership over basic human rights,” and thereby failed to protect people living in and traveling to the US.

What the travel warning said

Amensty’s advisory said gun violence in the US amounted to a “human rights crisis,” and warned travelers to the US:

The El Paso suspect is believed to have published a “race manifesto” online, in which he spoke of a “Hispanic invasion.” The attack is being treated as a hate crime.

Hate has no place in America

US President Donald Trump visited El Paso and Dayton on Wednesday, and condemned the racially motivated murders, declaring “hate has no place in America.”

But he added “mental illness and hatred pull the trigger. Not the gun.” Protesters in El Paso and Dayton said the president’s anti-immigrant rhetoric bore some blame for the violence.

Former Democratic representative for Texas Beto O’Rourke said Trump had “helped to create the hatred that made Saturday’s tragedy possible.”

American gun violence has killed 8,928 people in 2019 alone, according to US non-profit organization Gun Violence Archive. That figure includes 398 children under the age of 12.

The organization has recorded over 33,000 incidents of gun violence in the US in 2019 so far. Campaigners have repeatedly called for gun laws to be tightened in the US.

Canada updates travel guidelines for Egypt to the second category