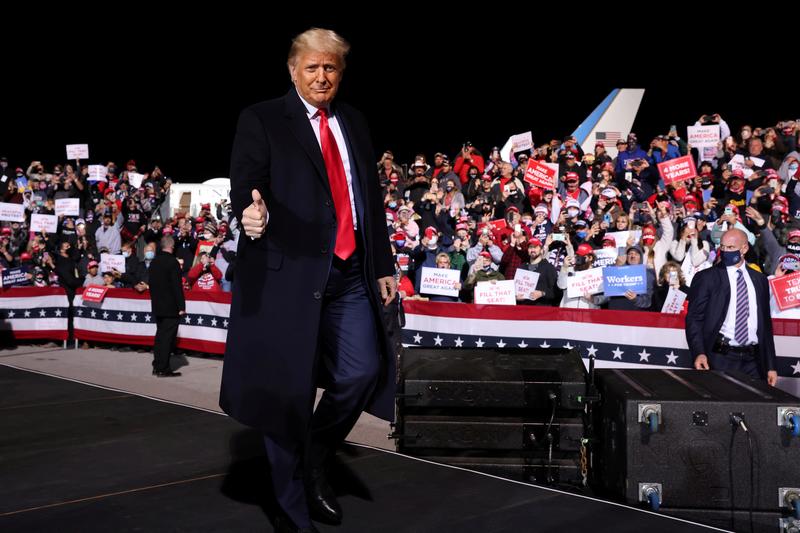 WASHINGTON (Reuters) – With less than three weeks to go until the US presidential election, President Donald Trump on Wednesday will hold a rally in Iowa, as he tries to make up for time lost on the campaign trail during his recent bout with the coronavirus.

As Trump races against the clock, Americans are casting ballots early at a record pace. Close to 12 million people have already voted, according to the US Elections Project at the University of Florida.

Long lines in Texas and Georgia snaked out of polling places and down sidewalks on Tuesday as people rushed to vote. Early voting starts in three more states on Wednesday – Kansas, Rhode Island and Tennessee.

Trump, a Republican who trails Democrat Joe Biden in national and some key state opinion polls ahead of the Nov. 3 election, will stage an evening rally at the airport in Des Moines, Iowa. Biden has no public campaign events scheduled after stumping in Florida on Tuesday.

Trump will then turn around to participate in a Miami town hall hosted by NBC News on Thursday evening, the network announced on Wednesday, saying in a tweet the event will be held outdoors to follow guidelines on preventing the spread of the deadly coronavirus.

Trump returned to the campaign trail on Monday night in Florida for the first time since disclosing he had the coronavirus. The rally came hours after the White House said Trump had tested negative for COVID-19 on consecutive days and was not infectious to others.

That Trump is traveling to Iowa so close to Election Day is a worrisome sign for his re-election hopes. He beat Democrat Hillary Clinton there by almost 10 percentage points in 2016, but recent polls have shown the state to be competitive.

Trump looks to be spending much of the week trying to galvanize his white, conservative base rather than trying to appeal directly to undecided voters, many of whom live in the nation’s suburbs. On Thursday, he heads to Greenville in rural North Carolina, a closely fought state where early voting will begin that day, then on to rural Georgia and central Florida the day after.

Reuters/Ipsos polling released this week showed Biden widening his lead in the key states of Wisconsin and Pennsylvania – states Trump won in 2016.

Iowa is also seeing a major spike in COVID-19 cases, with hospitalizations at an all-time high in the state. Republican Governor Kim Reynolds has resisted implementing statewide containment measures such as a mandate to wear masks. This week, she urged Trump supporters on social media to come out en masse to see the president.

But Trump’s illness has put the focus of the campaign’s closing stretch squarely on his response to the coronavirus, with Biden repeatedly criticizing Trump’s handling of the pandemic, which has infected more than 7.8 million people in the United States, killed more than 214,000 and put millions out of work.

On Tuesday in Florida, Biden told a group of seniors at a community center that Trump had recklessly dismissed the threat that the virus had posed to their at-risk population.

Trump has touted his handling of the crisis.

The Trump campaign said it would conduct temperature checks and hand out masks at his rallies but not require attendees to wear them.

At his airport rally in Johnstown, Pennsylvania, on Tuesday, some of Trump’s supporters in the front rows wore red-and-blue masks sporting the president’s “MAGA” slogan, but many other attendees wore no masks at all.

A nonprofit farm policy advocacy group, Rural America 2020, took out a digital billboard across from the Des Moines airport warning that the Trump rally would be a “COVID superspreader event.”

Trump intensifies focus on Harris in final weeks of campaign