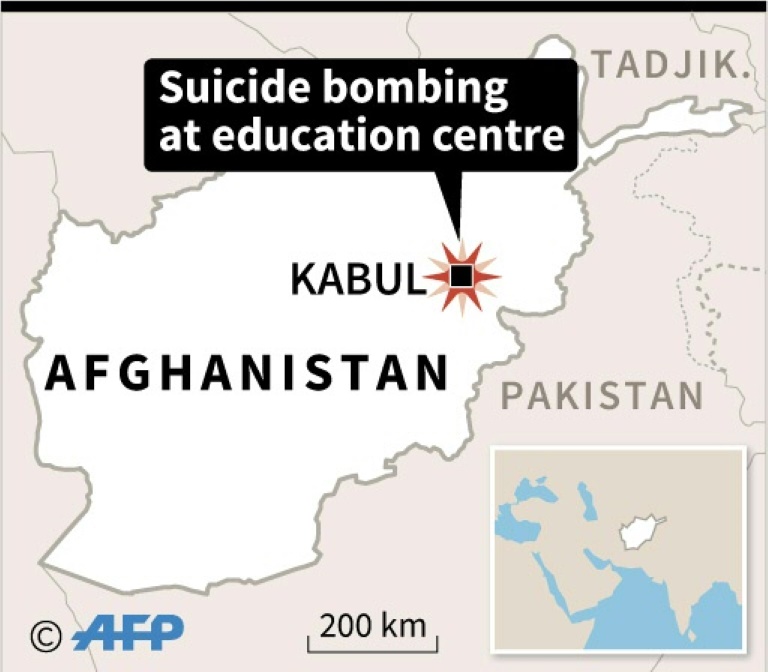 At least 25 people were killed when a suicide attacker struck an education centre in a minority Shiite area of western Kabul Wednesday, officials said, the latest assault in Afghanistan’s war-weary capital.

“We can confirm the attack was caused by a suicide bomber on foot. The bomber detonated himself inside the education centre,” police spokesman Hashmat Stanikzai said.

The spokesmen for the interior ministry and health ministries confirmed that at least 25 people were killed and 35 injured.

There was no immediately claim of responsibility for the attack. The Taliban quickly denied they were involved.

Afghanistan has been reeling from a recent upsurge in militant violence, including a massive, days-long Taliban onslaught on the eastern city of Ghazni.

Analysts have said the assault on Ghazni was a military and psychological victory against the government in Kabul, proving the insurgents have the strength to strike a strategically vital city near the capital at will and remain entrenched there for days.

At least 100 security forces were killed in the fight for Ghazni, officials have said, with unconfirmed fears that at least as many civilians died.

Afghan security forces, beset by killings, desertions and low morale, have taken staggering losses since US-led NATO combat forces pulled out at the end of 2014.

But it is ordinary Afghans who have taken the brunt of the violence in the grinding conflict, especially in Kabul, which the United Nations has said is the deadliest place for civilians in the country.

Militant attacks and suicide bombs were the leading causes of civilian deaths in the first half of 2018, a recent UN report showed.

The uptick in violence comes as US and Afghan forces intensify ground and air offensives against the Islamic State (IS), and the Taliban step up their turf war with the group.

The Taliban have not claimed a major assault in Kabul for weeks.

IS, however, has carried out multiple attacks in the eastern city of Jalalabad and the capital in recent months, targeting everything from government ministries to a midwife training centre.