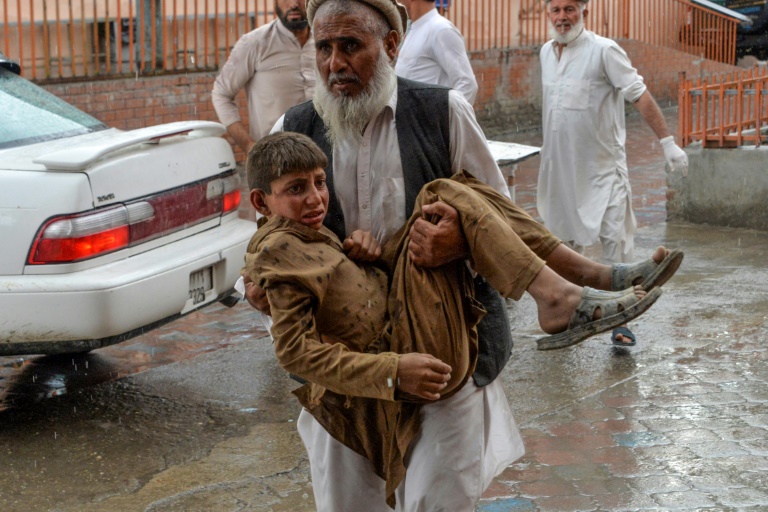 At least 62 people were killed by a blast inside an Afghan mosque during Friday prayers, according to officials, a day after the United Nations said violence in the country had reached “unacceptable” levels.

The attack — the year’s second most deadly to date — took place in the eastern province of Nangarhar and also wounded at least 33 people, the provincial governor’s spokesman Attaullah Khogyani told AFP.

The blast was carried out with “explosives that were placed inside the mosque”, Khogyani said, though other sources — including the Taliban — said the building may have been hit by a mortar.

A spokesman for the Islamist extremist Taliban said the group has “condemned this atrocity in the strongest terms” and labelled it a “major crime”.

The Islamic State group has also been active in Nangarhar.

Witnesses said the roof of the mosque had fallen through after a “loud” explosion, the nature of which was not immediately clear.

About 350 worshipers were inside at the time, local resident Omar Ghorzang told AFP.

“Dozens of people were killed and wounded and were taken in several ambulances,” Haji Amanat Khan, a 65-year-old local resident, told AFP.

UN Secretary General Antonio Guterres, through a spokesman, said children were among the injured.

“Those responsible for this attack must be held accountable,” the spokesman said.

The blast came after the United Nations released a new report on Thursday saying an “unprecedented” number of civilians were killed or wounded in Afghanistan from July to September.

The report, which also charts violence throughout 2019 so far, underscores how “Afghans have been exposed to extreme levels of violence for many years” despite promises by all sides to “prevent and mitigate harm to civilians”.

It also noted the absurdity of the ever-increasing price paid by civilians given the widespread belief that the war in Afghanistan cannot be won by either side.

“Civilian casualties are totally unacceptable,” the UN’s special representative in Afghanistan, Tadamichi Yamamoto said, adding they demonstrate the importance of talks leading to a ceasefire and a permanent political settlement.

The figures — 1,174 deaths and 3,139 injured from July 1 until September 30 — represent a 42 percent increase compared to the same period last year.

The UN laid most of the blame for the spike at the feet of “anti-government elements” such as the Taliban, who have been carrying out an insurgency in Afghanistan for more than 18 years.

July alone saw more casualties than in any other month on record since the United Nations Assistance Mission in Afghanistan (UNAMA) began documenting the violence in 2009.

But the violence has surged so far in the third quarter that it yanked the overall total for the year back on par with the bloodiest since NATO withdrew its combat forces at the end of 2014.

Image; AFP / NOORULLAH SHIRZADA A volunteer in Afghanistan carries an injured youth to hospital following the country’s second-deadliest blast of the year, in Nangarhar Province