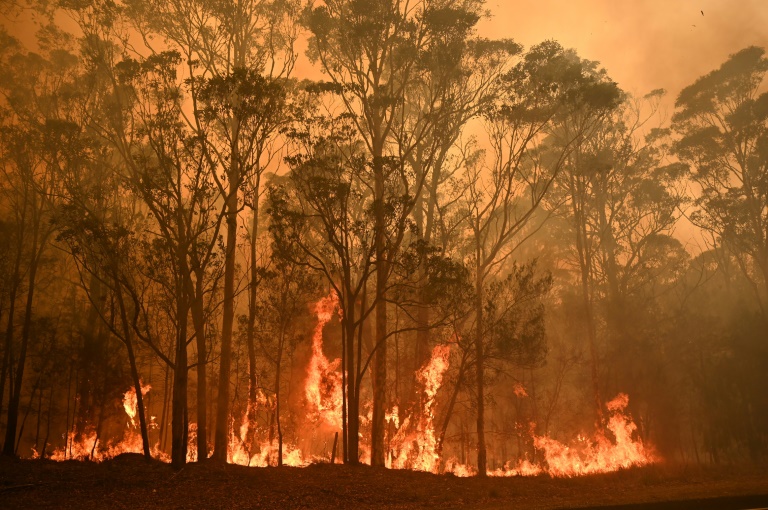 Stunned Australians on Sunday counted the cost from a day of catastrophic bushfires that caused “extensive damage” across swathes of the country and took the death toll from the long-running crisis to 24.

Hundreds of properties were destroyed and one man died trying to save a friend’s home in the severe conditions — among the worst in Australia’s deadly bushfire crisis.

But even as Australians tried to regroup, seaside towns were plunged into darkness, ash rained down on rural communities and major cities were again cloaked in smoke on Sunday.

In the state of New South Wales alone, almost 150 fires continued to burn, many out of control, with light rains offering little relief and blazes again touching the suburbs of Sydney.

Everywhere, people struggled to come to grips with a catastrophe that has taken place on a near-continental scale, unfurled over months and altered daily life for millions.

“We’re in uncharted territory,” New South Wales Premier Gladys Berejiklian said. “We can’t pretend that this is something that we have experienced before. It’s not.”

Authorities have struggled to keep pace with the severity of the crisis — which has scorched an area almost the size of Ireland.

Warships and combat helicopters have already been repurposed to help out with the largest maritime evacuation in Australia since World War II — moving some of the 4,000 people trapped for days on the foreshore of Mallacoota to safety.

Up the coast, thousands of people remained displaced and many more are weighing an uncertain future.

Noreen Ralston-Birchaw, 75, lost her home in Mogo on New Year’s Eve and said she was unsure what to do.

Prime Minister Morrison also announced the establishment of a Bushfire Recovery Agency, that will run for two years and help survivors get back on their feet, a signal that the path ahead will be long and difficult.

For tens of thousands of volunteer firefighters, the immediate battle continued, earning them praise from across Australia and around the world.

Queen Elizabeth II on Sunday said she was “deeply saddened” by the fires, and thanked the emergency services “who put their own lives in danger” to help communities.

Celebrities have pledged or raised millions of dollars to support firefighters and fire-affected communities, including American pop star Pink, who tweeted on Saturday that she was donating US$500,000.

“Our family’s support, thoughts and prayers are with everyone affected by the fires all over Australia,” she posted on Instagram. “We are donating $500,000 to the Rural Fire Services who are all doing and giving so much right now.”

Sunday brought milder conditions including cooler air and some rainfall in New South Wales and neighbouring Victoria state — where firefighters also battled huge infernos worsened by winds and lightning strikes.
That will give authorities an opportunity to get fires under control and take stock of the damage.

But some communities were still under threat from out-of-control blazes, particularly in and around the town of Eden in New South Wales near the Victorian border.

“Visibility was down to about 50 metres, if that, and we had lots of debris falling out of the sky and a lot of white ash,” said John Steele, 73, who was evacuated with his wife from their rural property north of Eden late Saturday.

In Cooma in inland southern New South Wales, the fire crisis turned into a flood disaster when a large tower carrying 4.5 million litres of water swept away cars and filled homes with mud.

“First bushfire and now flood, back-to-back disasters,” a shaken resident who asked not to be named told AFP.

Australia’s capital Canberra was ranked as the city with the poorest air quality in the world on Sunday by Air Visual, an independent online air quality index monitor, amid a severe haze caused by the fires.

Flights were cancelled, galleries were closed to safeguard public health and a large consignment of facemasks was being brought in.

In some rural areas, police patrolled the streets amid reports of looting and break-ins in bushfire-affected areas.

While bushfires are common in Australia’s arid summers, climate change has pushed up land and sea temperatures and led to more extremely hot days and severe fire seasons.

Image; AFP / PETER PARKS The bushfire crisis in Australia has destroyed hundreds of homes and burnt vast swathes of the country