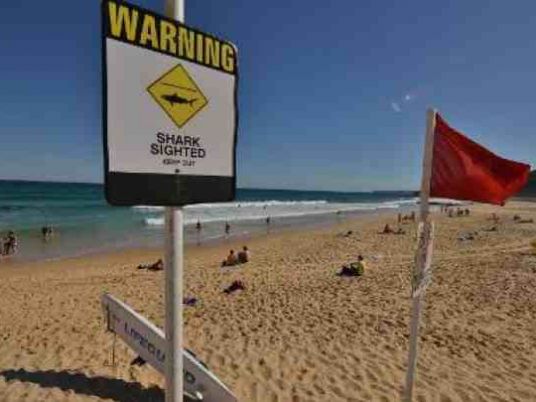 Australian beaches that had closed due to sightings of large sharks for a record nine days, reopened on Monday, officials said, but rough surf kept most swimmers away.

A five-metre (16 foot) great white estimated to weigh 1,700 kilograms (3,750 pounds) and nicknamed Bruce was first spotted off Merewether Beach near Newcastle north of Sydney on January 10.

Several other sharks, including tiger sharks feeding on dolphins, were also seen along the coast, prompting the closure of all six Newcastle beaches despite sweltering summer temperatures.

Authorities reopened the beaches on Monday after jetski patrols found no sign of the animals, said Henry Scruton, president of the Hunter branch of Surf Life Saving New South Wales.

"The big one is the monster," Scruton said, referring to Bruce.

"Bruce, he has been sighted on Saturday, Sunday, Tuesday, Wednesday, definitely the Friday," Scruton told AFP.

"But I don't think they've sighted him again this weekend."

Sharks are a regular feature in Australian waters and swimmers and surfers have had their fair share of encounters with the animals this summer.

Some beaches to the north and south of Sydney were closed on the weekend due to shark sightings and a 17-year-old boy was hospitalised after he was bitten on the hand while spearfishing 230 kilometres south of Sydney on Friday.

Fatalities are rare in Australia but two teenagers died in shark attacks last month, one on the west coast and one on the east.

Scruton said there had been a number of sharks seen around Newcastle and the Hunter region this summer, with another large one taunting two fishermen on the weekend by circling and nudging their small boat.

"It felt like getting trapped in a room with an angry pit bull," one of those onboard, Tim Watson, told the Newcastle Herald.

"It wouldn't leave us alone. You almost wanted to stop and admire it but it was being pretty aggressive.

"It was as big as a wagon car — that's what it felt like looking at it," Watson said.

Scruton said he hoped that Bruce had enjoyed his holiday in Newcastle and had moved on for good.

"We've never had one come that was so big and stay for so long."