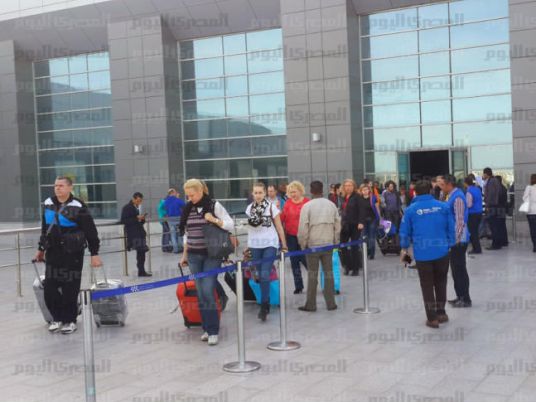 According to official sources at the Tourism Ministry, the government is currently working to reduce the negative consequences that would result from a recent decision that requires foreigners to obtain a visa before coming to Egypt, which would come into effect in May.
The Tourism Ministry has only issued one statement on the subject, saying the minister has no reservations on the decision, at least until authorities wrap up a series of meetings with the affected institutions.
The decision will affect tourists who come to Egypt to dive in the Red Sea at a time when diving centers have begun to be independent and not rely on tour operators to give them business. The matter will now be in the hands of the tour operators because it is they who get the visas for divers.
Diving amounts to 40 percent of tourism and relies on the last-minute tourist. Perhaps the only way out is for the government to apply an e-visa system.
Background of the decision
Informed sources said the decision was taken after pro-Brotherhood human rights delegations and political activists kept coming to Egypt and criticizing the government for the way it handled the Rabaa sit-in and the crackdown on political opposition. They were granted visas upon arrival at the airport, according to the old system.
The sources also said that the decision was taken the night before Tourism Minister Hisham Zaazou was dismissed while he was in Berlin, and that the new minister, Khaled Rami, did not have the time to study it.
The Tourism Promotion Office in the United States was informed of the decision and sent it to the various tour operators and the matter was discussed intensively on social network sites, while the government kept silent and refrained from explaining the repercussions of such a decision.
People began to ask questions like, “Does this mean the government is only concerned with what happens abroad and ignores the local media? Does the minister not know that keeping silent means a lack of vision?”
Businessmen working in tourism could not answer questions of foreign tour operators as to whether the government would rescind the decision or at least postpone it.
Decision would reduce tourism by 15 percent
Tourism Promotion Authority Chairman Sami Mahmoud said the decision would reduce tourism by 15 percent, especially cultural, classic and Arab tourism.
Meanwhile, an official source said the government would not go back on the decision but mechanisms to facilitate the visa could be devised.
Travel agency chairman Mohamed al-Hassanein criticized the timing of the decision that it came after the economic conference in which Egypt send the message that it is open to all kinds of investments. He thought the decision was a rumor in the beginning because there was no official notification of it.
Decision threatens 35 percent of tourism revenue
Hotels Chamber Chairman Mohamed Ayoub said the decision would threaten 35 percent of tourism revenue, specifically Nile cruises between Luxor and Aswan.
He said there are 68 Nile cruisers operating at a 13.2 percent occupancy versus 70 percent in 2010. He said even this low occupancy would be affected by the decision.
He said the terrorist attack in Tunisia affected tourism to the Middle east as a whole, which warrants a reconsideration of the decision.
He suggested an e-visa system or courier service for applicants to speed up procedures, with a maximum of 72 hours to reply with acceptance or rejection. He also suggested a hotline to answer queries of tour operators.
Decision stops promotion material distributed abroad
A Tourism Ministry source said branches abroad would stop printing and distributing promotional material to encourage tourism to Egypt, explaining that tour operators abroad normally pay for such promotional material, which they would stop doing now.
The source also said that flights operating during certain times of the year would also be affected, as normally they carry individual tourists, especially Arab tourists, who are not coming among groups organized by tour operators.
He said this would make Egypt depend more on charter flights that carry groups, which would cost the government more because it partially subsidizes the cost of those flights in order to encourage tourism.
He said the British Guardian newspaper wrote that Egypt was a tourist destination easy to enter, but now entry has been restricted.
Meanwhile, Elhamy al-Zayat, chairman of the Tourism Chambers of Commerce, said he suggested that Egypt Air, the hotels and the tour operators should be allowed to apply for the visa on behalf of the tourist in order to avoid negative repercussions of the decision.
Online e-visa could be the solution
Electronic Tourism Committee Chairman Mustafa Sultan said he was not involved in the decision, despite the fact that individual tourists book hotels and airline tickets online, representing 25 percent of total tourists coming to Egypt.
He suggested implementing an online e-visa system to facilitate the matter and a barcode at points of entry to check the data of the incoming tourists, which would take about six months to complete.
He also offered to supply experienced personnel to operate the system, and to finance it.
Edited translation from Al-Masry Al-Youm