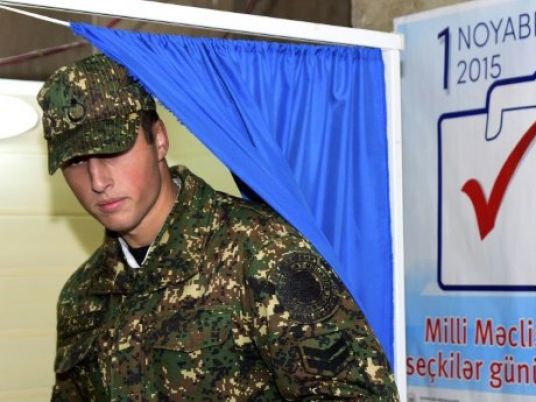 Azerbaijan's ruling party won a majority in disputed parliamentary polls that were boycotted by all major opposition forces, final results showed Monday, cementing strongman President Ilham Aliyev's grip on power.
Aliyev's Yeni(New) Azerbaijan party took 71 seats in the country's 125-seat parliament, with all votes counted, the Central Election Commission chief, Mazakhir Panakhov, told a news conference.
Final voter turnout from Sunday's polls stood at 55.7 percent, he said.
International rights groups have cast doubt on the election, accusing the government of jailing political opponents on trumped-up charges and limiting parties' ability to campaign in the ex-Soviet state.
Not a single election held in Azerbaijan since Aliyev came to power in 2003 has been recognized as free and fair by international observers.
The tightly controlled Caucasus nation's leading opposition parties, including the National Council of Democratic Forces (NCDF), the Musavat party, and the Democratic Party of Azerbaijan, all boycotted the polls, with the NCDF calling them "fully falsified."
"The National Council states that this is a blatant usurpation of power," the NCDF said Monday in a statement, accusing Aliyev of "once again taking power from the people."
The leader of the opposition Musavat party, Isa Gambar, told AFP that a win for Aliyev's party was a foregone conclusion "in the absence of strong opposition candidates and amid widespread violations."
He decried "countless instances of electoral fraud, including multiple voting and illegal restrictions on observers' work."
Another major opposition party, the Republican Alternative (REAL), said it would not recognize the results.
The Organization for Security and Cooperation in Europe (OSCE) did not send observers to the polls, citing "restrictions" imposed on its monitoring mission by Azerbaijan authorities and condemning the "crackdown on independent and critical voices".
Aliyev on Sunday criticized the move as "unacceptable."
Jailed opponents
Any display of public discontent and political dissent usually meets a tough government response in the country of 9.5 million people.
Rights groups say the government has particularly clamped down on opponents since Aliyev's won a third consecutive term in 2013, extending his family's decades-long hold on power in the energy-rich Caspian Sea nation.
Both Human Rights Watch (HRW) and Amnesty International condemned the authorities' systematic attacks on opponents in the lead-up to Sunday's election.
"At least 20 people are currently imprisoned in the country merely for having challenged the government's policies," London-based Amnesty said in a statement.
HRW accused the authorities of using spurious charges of drugs or weapons possession, tax evasion, and even high treason to jail political activists and dissenting journalists.
Over the past year, Aliyev's leading political opponent, REAL party leader Ilgar Mammadov, as well as the country's top critical journalist Khadija Ismayilova and a prominent Azeri couple that campaigns against human rights abuses, Leyla and Arif Yunus, were sentenced to lengthy jail terms over charges they say were politically motivated.
Aliyev took over in 2003 on the death of his father Heydar Aliyev, a former KGB officer and communist-era leader who had ruled newly independent Azerbaijan with an iron fist since 1993.
The mainly Muslim country wedged between Iran and Russia is considered key to Western efforts to reduce Europe's reliance on Russian hydrocarbons.
Depending largely on its energy exports, the country was hit by a drop in oil and gas prices and the global economic downturn, and in late February 2015 devalued its currency, the manat, by 34 percent against the dollar.
More than 700 candidates from 13 parties and one bloc were standing for the single-house parliament, the Milli Majlis, to be elected for a five-year term.
Over 5.9 million people were registered to vote.