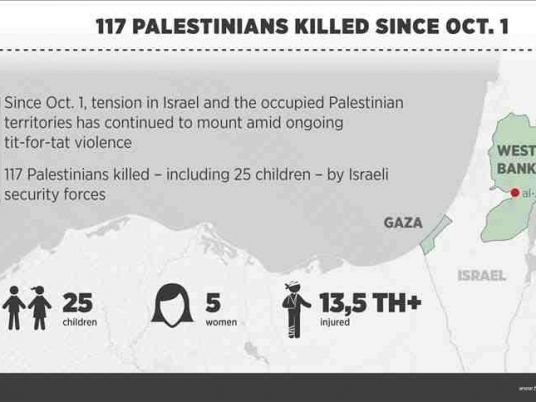 The number of Palestinians killed by Israeli security forces since October 1 reached 117 on Tuesday after a young man was shot dead near the West Bank city of Bethlehem.
According to the Palestinian Health Ministry, 21-year-old Malik Shahin was killed during a predawn raid carried out by Israeli security forces in the Al-Duheisha refugee camp.
Ministry officials say Shahin was shot in the head by an Israeli sniper — and left to bleed on the ground for more than an hour — before eventually being taken to a local hospital where he was soon pronounced dead.
One day earlier, another Palestinian man was killed by Israeli security forces in the occupied West Bank city of Hebron (Al-Khalil) after allegedly trying to stab an Israeli.
According to the Palestinian Health Ministry, Ehab Maswadeh, 20, was killed near Hebron’s Ibrahimi Mosque, referred to by Israelis as the "Cave of the Patriarchs".
Israeli military spokesmen said Maswadeh had been shot by Israeli security forces after stabbing an Israeli, who was later taken to hospital.
The area around Hebron’s Ibrahimi Mosque, which is divided between Muslims and Jews, has been a frequent flashpoint for violence, especially in recent weeks.
And on Sunday, another young Palestinian — Amer Skafi, 21 — was killed by Israeli forces after allegedly carrying out a vehicular attack that left three Israelis injured in Jerusalem’s Romema neighborhood, which has recently seen an upsurge in violence following a period of relative calm.
Israeli police spokesman Micky Rosenfeld, for his part, alleged that Skafi had driven his car into a group of Israelis before going on a stabbing rampage.
Security camera footage published subsequently by Israeli Hebrew-language daily Yedioth Ahronoth showed Israeli police shooting Skafi multiple times after he was already injured and lying prone on the street.
Later the same day, dozens of Israeli soldiers ransacked Skafi’s home in East Jerusalem's Beit Hanina district.
Eyewitnesses said at least 20 Israeli troops, firing rubber bullets and stun-grenades, had raided the slain Palestinian’s house.
‘In cold blood’
According to the Palestinian Health Ministry, the latest killings bring the total number of Palestinians shot dead by Israeli security forces since October 1 to 117, including 25 children and five women.
At least 89 of those slain were killed "in cold blood", according to the ministry.
Over the same period, the ministry says, almost 5,000 Palestinians have been injured by heavy ammunition and rubber bullets fired by Israeli security forces.
The last nine weeks have also seen 22 Israelis killed and over 225 injured.
The exact reason for the current spate of violence — which some observers are calling a third Palestinian "intifada" ("uprising") — remain subject to debate, with Palestinians and Israelis accusing each other of starting the violence.
The tit-for-tat violence has been accompanied by a series of punitive measures by Israel that have further enraged Palestinians.
These measures include the demolition of the homes of alleged Palestinian attackers; the detention of Palestinian minors for throwing stones; and a refusal by the Israeli authorities to hand the bodies of slain Palestinians over to their families.
At the height of the violence, the Israeli authorities stepped up security in occupied East Jerusalem, with heavily-armed police and paramilitary troops deployed in the city and several Palestinian neighborhoods being entirely cordoned off.
Although the violence was initially confined to East Jerusalem, especially in and around the flashpoint Al-Aqsa Mosque compound, most of the Palestinian deaths since October have occurred in the occupied West Bank.
The deeply-divided West Bank city of Hebron has been particularly hard-hit by the violence.
Israel accuses Palestinian groups — especially resistance movement Hamas and the Palestinian Authority, which respectively govern the blockaded Gaza Strip and the West Bank — of inciting attacks on Israelis.
Alleged attacks on Israelis have mainly been carried out by young Palestinians — many of whom have used improvised weapons, such as kitchen knives or vehicles — rather than organized resistance groups.
Some observers attribute the recent spate of violence, now in its third month, to a July arson attack in the West Bank by suspected Jewish settlers that left an 18-month-old Palestinian child — Ahmed Dawabsheh — and both of his parents dead.