Bishop Tawadros, the archbishop of Beheira Governorate in the Nile Delta, was ordained 118th Pope of the Coptic Orthodox Church on Sunday.

Tawadros, 60, is close to the interim pope, Bishop Pachomius. He will succeed Pope Shenouda III, who died in March.

Bishoy Gerges Mossad, the child who was selected by Pachomius for the altar lottery, chose Tawadros’ name, while blindfolded, from three slips of paper bearing the names of the three papal finalists: Bishop Rafael, Father Rafael Ava Mina, and Bishop Tawadros.

Bishop Rafael, 54, auxiliary bishop of Central Cairo, worked as a surgeon before becoming a priest in the 1990s.

Father Rafael Ava Mina, 70, was a monk at St. Mina Monastery and the deacon for Father Kyrillos VI.

Tawadros is known as one of the church’s “dovish” figures who seeks peaceful solutions to sectarian incidents.

Some, however, accuse Tawadros of failing to defend the churches under his observance sufficiently. Activist Mina Badie Abdel Malek had called for his removal from the candidates’ list.

He was named by the late Pope Shenouda III as Archbishop of Beheira in June 1997. He graduated from Alexandria University’s Faculty of Pharmaceutics, then from the clerical school in 1985.

The Freedom and Justice Party congratulated Tawadros on his ordination, saying they are optimistic about working with him to spread good morals and emphasize the values of freedom, justice and equality. 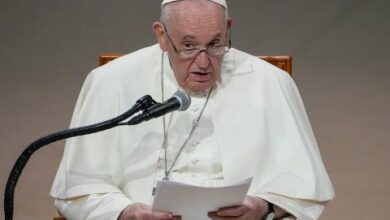