(CNN) — It’s been almost 20 years since Concorde flew for the final time.

While various companies have set about bringing supersonic travel back to life since then, we’re still yet to see this come to fruition.

However, Colorado-based start up Boom Supersonic is taking some major leaps forward in its quest to make supersonic flying a reality again.

Nearly two years after rolling out ts prototype supersonic demonstrator, the XB1, Boom has unveiled a major new design for its much anticipated Overture airliner, which will fly at twice the speed of today’s subsonic commercial jets and is expected to carry its first passengers in 2029.

Renderings of the aircraft, which has been in development for several years, were revealed this week during a press conference at the Farnborough Air Show, a UK-based aviation trade event.

Not only does the updated design feature an extra engine, it also has a contoured fuselage and gull wings.

According to Kathy Savitt, president and chief business officer at Boom Supersonic, the refined design is the result of around 26 million hours of software simulation, five wind tunnel tests, and 51 design iterations.

“We had to really take the time to learn, to iterate, to walk our walk,” Savitt tells CNN Travel from the Boom Chalet at the Farnborough Air Show.

“There’s nothing like having an actual aircraft to learn from, in addition to the simulators, and the computational hours, which I think has resulted in a remarkable breakthrough, and a remarkable aircraft.”

The aircraft, scheduled go into production in 2024, will fly Mach 1.7 over water with a range of 4,250 nautical miles and have capacity for 65 to 80 passengers, say the team at Boom.

In January, United Airlines put in an order for 15 of the supersonic jets, which could potentially fly from New York to London in just three and a half hours.

Meanwhile, Japan Airlines invested $10 million in Boom back in 2017 and has the option to purchase up to 20 aircraft.

In addition, the aviation startup recently announced a partnership with US military technology company Northrop Grumman to develop a military variant of Overture.

Concerns over noise, along with its environmental impact, played a significant part in the demise of Concorde, and Boom is going to great lengths to ensure that this supersonic jet is both a sustainable and quieter.

“Our vision has always been for Overture to be the first clean sheet airplane that was developed and optimized to run on 100% sustainable aviation fuel,” explains Savitt.

“And today versus during the time of Concorde, we’re able to use carbon composite materials throughout our fuselage, on our wings and on the vertical tail, which allows us to be much more aerodynamic and far more efficient.

This helps reduce drag, which takes up fuel, as well as to make the plane far more fuel efficient.”
United has already pledged to fly its Overture fleet on 100% sustainable aviation fuel (SAF).

According to Savitt, the introduction of a fourth engine on the updated aircraft design will help to reduce noise considerably, while Overture is to utilize the world’s first automated noise reduction system.

“We really focused on how to make our takeoffs and landings as quiet, if not more quiet, than any other long haul airliner leaving from any airport,” she explains. “And that’s what we’ve been able to achieve.

“But we’re still flying at Mach 0.94 over land, and it was really important for us to be good for the community around airports, by really addressing noise.”

Efforts to raise the speed of passenger aircraft have been gaining momentum in recent years.
NASA has teamed up with aircraft manufacturer Lockheed Martin to develop the X-59, a “quiet” experimental supersonic aircraft, in order to collect data that will be shared with US and international regulators to help determine new sound-based rules for supersonic flight over land.

Earlier this year, plane manufacturer Bombardier confirmed that its test vehicle, the Global 7500, had broken the sound barrier during a demonstration flight last May, achieving speeds of more than Mach 1.015.
Back in 2020, aviation startup Aerion revealed plans for a Mach 4+ commercial airliner named Aerion AS3, but the Florida-based company collapsed the following year.

“Aviation has not seen a giant leap in decades,” Boom founder and CEO Blake Scholl noted in a statement this month, before declaring that Overture will “fundamentally change how we think about distance.”
Boom now has more than 600 different routes across the world planned for Overture.

Building connections
“We are really focused on connecting people,” says Savitt. “We ultimately want Overture to be not only the fastest, but the most sustainable, and the most accessible aircraft for anyone to fly supersonic.

“In a world where you want to speed up that human connection, it shouldn’t be that only few get to do it. ”

While Scholl has previously said that Boom’s long-term goal is to eventually be able to take passengers anywhere in the world in four hours for $100, it’s safe to assume that we’re unlikely to see seats on sale at that price for a long while.

Stressing that “it’s up to the airlines how they price it,” Savitt estimates that an Overture flight will initially cost around 25% more than a Business Class and around 75% less than the Concorde, which was charging around $12,000 for a round trip back in the nineties.

Aside from speed, safety and sustainably, described as its “fundamental principles,” the company has put a lot of focus on customer experience.

Passengers will have the option to switch from various digital inflight experiences and customize their windows accordingly during their journey.

Savitt says that Boom sat down with thousands of potential passengers in order to gain a better understanding of their needs and they’ve found that the desire for sustainable speed has been considerably high.

“They want a new flying experience,” says Savitt. “They don’t want to spend double the time on a flight, especially post-Covid.”

While there’s still a long way to go before we’ll see the aircraft starting passenger services, taxi testing has already begun on the XB1, and the Boom team are “working on getting her into the air.”

So could supersonic really be the future of travel, or is it merely a pipe dream that will never really get off the ground?

There’s still no clear answer to that question as such, but the advances made by Boom, as well as the high speed achievements of the Bombardier Global 7500 flight test vehicle and the involvement of NASA, are certainly exciting and hopeful developments.

Savitt believes that the Overture has the potential to revolutionize air travel in the same way as Boeing’s 747 jumbo jet, which made its commercial debut in 1970 and became known as the “Queen of the Skies.”
“Ultimately, we would love to drive a paradigm change, where supersonic becomes really the way that people want to fly,” she says.

“It’s sustainable. It’s fast. It changes the journey, in that you can spend more time connecting at your destination.
“In 10 to 15 years, we expect it to be the first choice of traveling, because it’s such a difference maker.” 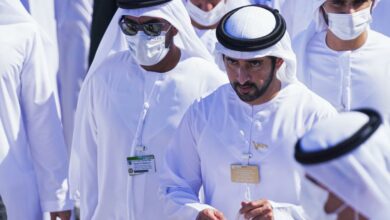