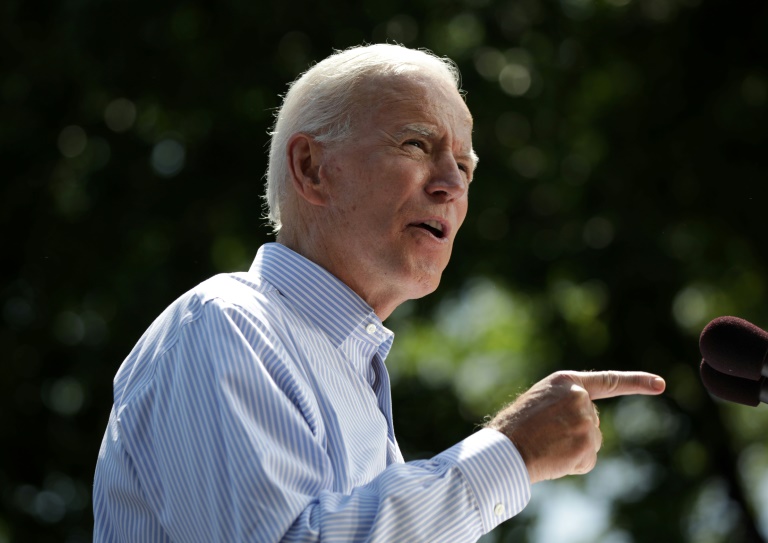 The former vice president thus broke a month of silence on the most potentially damaging claims he has confronted since launching his White House bid a year ago.

Republicans have tried to use them to damage his prospects against President Donald Trump in November’s election.

“They aren’t true. This never happened,” Biden said in a statement addressing the accusations made by Tara Reade, a former staffer in his Senate office.

The campaign of the presumptive Democratic presidential nominee had forcefully denied the allegations, but Biden himself had yet to address them publicly until now.

Biden, 77, said Reade’s then-supervisor and former senior staffers in his office “have said, unequivocally, that she never came to them and complained or raised issues.”

Reade said on a podcast in March that then-senator Biden sexually assaulted her in a Capitol Hill corridor in 1993, when she was 29.

Reade, now 56, alleged that Biden pinned her against a wall when she brought him a gym bag, put his hands “down my skirt” and violated her.

Reade’s public account evolved over time. In early 2019, when Biden was preparing his presidential bid, she was among multiple women who accused Biden of touching them inappropriately, or in ways that made them feel uncomfortable.

She has since presented a more serious claim of assault to media outlets, and filed an incident report with the Washington police in early April in which she did not name Biden.

Biden went on a morning news show to publicly refute the claims.

“It is not true. I’m saying unequivocally it never, never happened, and it didn’t,” Biden told MSNBC.

But he stressed that “I have a right to say, look at the facts. Check it out.”

Trump, who faces Biden in a presidential election that has been turned on its head by the coronavirus pandemic, himself faced more than a dozen accusations of sexual harassment and assault before he became president.

He came out Friday on the side of Biden, telling a right-wing radio host: “I would just say to Joe Biden: Just go out and fight it. It’s, you know, it’s one of those things.”

“I’ve been a total victim of this nonsense false accusations,” he said.

Reade has not produced a copy of the complaint that she allegedly filed in 1993.

Biden, calling for transparency, said he has asked officials to search the National Archives, where he says any such document would now be stored.

“There’s nothing for me to hide,” he said.

But Biden resisted the idea of calling for a search among his Senate papers.

Those documents “do not contain personnel files,” he said.

During a Friday evening virtual fundraiser, Biden told donors he was heartened that journalists were investigating the matter: “It isn’t enough just to simply take my word for it and to dismiss it out of hand. Frankly, that shouldn’t be enough for anyone.”

Biden, who has pledged to pick a woman to be his vice president, stressed that he has always worked to improve conditions for women, including authoring the Violence Against Women Act.

He was also asked by MSNBC about comments he made during the 2018 Supreme Court confirmation process for Brett Kavanaugh, who had been accused of sexual assault.

Biden said at the time that when a woman comes forward with such accusations, “you’ve got to start off with the presumption that at least the essence of what she’s talking about is real.”

Asked what made things different now, Biden said: “Women are to be believed, given the benefit of the doubt, if they come forward and say something happened to them.”

“Then you have to look at the circumstances and the facts,” he added.

“The truth matters,” he said. “These claims are not true.”

Biden leads Trump in national polling ahead of November’s elections by about five percentage points, according to a poll average compiled by RealClearPolitics.

Several women seen as candidates to be Biden’s running mate, including Senator Kamala Harris and former Georgia state lawmaker Stacey Abrams, have expressed support for Biden regarding the allegations.

The top Democrat in Congress, House Speaker Nancy Pelosi, endorsed Biden for president this week and said Thursday that she remains “satisfied” with his response to the allegations.

Biden, meanwhile, is carrying on with online events such as town halls and fundraisers during the coronavirus pandemic, locked down at his Delaware home where he built a makeshift studio in his basement for television appearances.

Image: AFP/File / Dominick Reuter In this file photo taken on May 18, 2019, former US Vice President Joe Biden speaks during the kick off of his presidential election campaign in Philadelphia, Pennsylvania

Biden predicts Trump will try to postpone US election

Biden-Sanders vote proceeds in 3 US states despite virus fears