At the highest point in Cairo, in the suburb of Moqattam, stands the headquarters of the Muslim Brotherhood, the party currently at the pinnacle of Egypt’s political pyramid.

On Saturday afternoon, roads surrounding the headquarters were the scene of clashes that began when political opponents of the Brotherhood who drew graffiti on the street leading to the premises were attacked.

Expressing their condemnation of the Brotherhood’s supreme guide, protesters wrote on the ground the phrases “Leave” and “Down with the rule of the supreme guide.” Other messages criticized Brotherhood members and described them as “sheep,” an epithet popular among the group’s political opponents and a reference to Brotherhood members’ alleged blind following of orders from group’s Guidance Bureau.

In the ensuing clashes, Brotherhood members were filmed attacking journalists as well as a female protester who was slapped to the ground so hard that the sound of the slap was audible from several meters away.

The attack on Mervat Moussa, a member of the Popular Current movement, spurred controversy and, in the days that followed, led to a new wave of anger against the Brotherhood.

A brutal attack that left activist Ahmed Douma with a bloodied nose and a torn shirt was also caught on video.

Douma tells Egypt Independent that protesters were more than 100 meters away from the Brotherhood building, and were careful not to approach it nor “respond to provocation from Brotherhood members in order to avoid a confrontation.”

He alleges that guards at the building left their posts and started clashes with the activists.

Douma, who wrote “To the sheep pen” on the road underneath an arrow pointing to the Brotherhood building, says protesters’ graffiti and chants were within the scope of freedom of expression.

“The Muslim Brotherhood — which claims that its members were raised on Islamic principles — swore at and threatened us. Then a group of them approached us from behind while carrying chairs, sticks and knives, and started attacking us,” Douma says.

His claims that the protesters were not near the Brotherhood building and that some Brotherhood members made death threats are substantiated by videos of the incident uploaded to YouTube.

The video that caused the biggest stir showed Brotherhood members slapping Moussa so hard that she was knocked to the ground.

After Brotherhood members withdrew into the headquarters, clashes continued until the evening between angry protesters and security forces responsible for securing the building.

They resumed Sunday night when a group of protesters gathered outside the headquarters and, after several hours of peaceful chanting, some of the demonstrators approached the building’s wall and began removing party insignia, leading security forces to use armed personnel carriers to chase them away.

Yehia Abdel Shafei, a middle-aged, bearded man, was one of the protesters outside the Brotherhood building Sunday. Holding a sign that read, “The Muslim Brotherhood are criminals who corrupt and don’t propitiate,” Abdel Shafei says he was protesting the act of Moussa being slapped.

“It makes me sad, as a Muslim, to see a group such as this claim that they are building an Islamic project, and then give Islam a bad name through actions that are absolutely rejected by both the religion and our society,” he says.

At the same time protesters were gathered at the front entrance of the headquarters, large groups of young Brotherhood members were trooping inside via its back entrance to secure it from attack, one member says.

Ahmed says violence against women by his Brotherhood colleagues cannot be justified, but that the insults used by protesters are at odds with Egyptian society’s values and cannot be categorized under freedom of expression.

“We are human and make mistakes, but we must not start from the reaction — we must also criticize the provocative actions of some protesters that led to the incident,” he adds.

Media outlets and rights groups widely condemned the Brotherhood’s attack on the journalists.

Diaa Rashwan, newly elected head of the Journalists Syndicate, led a march from the syndicate to the prosecutor general’s office to submit a complaint against Brotherhood members.

Rashwan called on both Brotherhood Supreme Guide Mohamed Badie and President Mohamed Morsy to issue an official apology, the former because of his responsibility for the events and the latter in his capacity as an elected official who must defend journalists.

Rashwan also called on the Interior Ministry to reveal the identities of individuals who appeared in videos attacking journalists and hold them to account.

Photographer Mohamed Nabil, whose leg was broken during the clashes, said during a television appearance on satellite channel ONtv that Brotherhood members attempted to confiscate his camera while he was covering the events.

“It seems that the Brotherhood was about to do something and didn’t want anyone to film it,” Nabil said.

While a number of the journalists attacked by the Brotherhood appeared on satellite channels describing the incident, Brotherhood spokesperson Gehad Haddad condemned via Twitter what he described as the “media’s twisting of facts and misleading public opinion” by presenting what happened as an attack on journalists.

Haddad added in another tweet that “attacks on public and private property and writing offensive comments, especially in a residential area is considered illegal and immoral in all modern states.”

A team Abdallah tasked to investigate a complaint submitted by Rashwan identified a number of perpetrators through video clips and photos of the brawls. The day before, Abdallah also ordered the detention of 15 suspected of involvement in the clashes.

Brotherhood spokesperson Mahmoud Ghozlan had earlier asserted that the opposition youth insulted his organization “using the most horrid insults, infuriating our youth inside the office.”

He condemned the violence on both ends.

The Salafi Nour Party described the video of the assault on Moussa as “disgraceful” and “unjustified,” calling it both a violation of Sharia laws and chivalry.

This article was translated from Arabic by Sarah Carr. 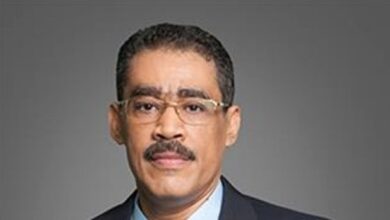