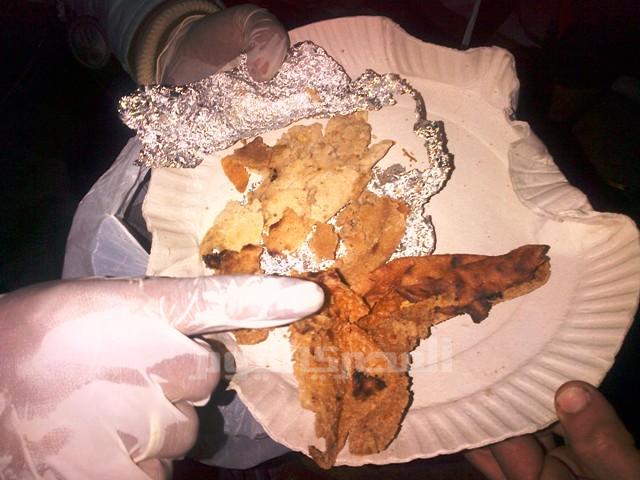 Some 40 activists involved in the “Occupy Cabinet” sit-in have been transferred to hospital after suffering from food poisoning, apparently caused by free food handed out to protesters on Wednesday afternoon.

According to eye-witness reports, a woman wearing a niqab (face-veil) distributed grilled meat sandwiches — known as “hawawshi” — to protesters camped outside the cabinet building in central Cairo.

Dr. Ahmed Farouq, a volunteer physician serving at a field hospital, confirmed that "the hawawshi was delivered to the protesters at their camp, wrapped in the wrappers of a fish and seafood restaurant." The doctor added that this restaurant does not make hawawshi.

Farouq added that the protesters started falling ill nearly five hours after having consumed the food. "This may very well be a plot hatched against the protesters. It may have been prepared and distributed by remnants of the old regime who want to see this sit-in dispersed,” he said.

“It could perhaps be bad meat that was unintentionally distributed amongst the protesters,” the doctor continued. “However, I do smell the work of provocateurs and trouble makers in this incident."

Dr. Bahaa Awad, a physician present at the scene, said: "They're falling down without symptoms of food poisoning or throwing up. The large number collapsing at the same time is very strange."

Nearly 40 protesters were transferred to the Toxins Center at the nearby Qasr al-Aini Street.

Farid Abdel Hamid Allam, a protester from Kafr al-Sheikh who also ate the food, said, "I ate the inside of the sandwich, but not the bread. I threw up and fainted a bit two hours later. I felt nauseous, but I won't go into the ambulance, otherwise they’ll arrest me. They put me in the ambulance, but I left."

According to volunteer nurse Nesma Mohamed, "The hawawshi was distributed by a woman who was not recognized by any of the protesters." The nurse added, "She came with a large supply of this food, distributed it and left immediately."

According to Mohamed, more than 35 protesters had been admitted to the toxins center by early Wednesday evening, displaying a number of symptoms, such as vomiting, intense sweating, and fainting.

"I saw the meat, and it didn't look like normal meat,” said the nurse. “In any case, we have samples of this meat and it is being analyzed at the moment. The results will tell us if it was bad meat or poisoned meat."