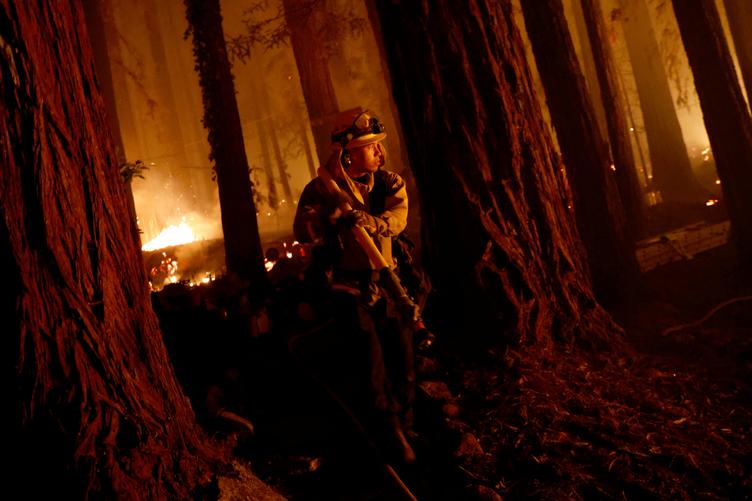 (Reuters) – Hundreds of wildfires burning across Central and Northern California that have already killed six people more than doubled in size on Friday, becoming some of the largest in state history and threatening small towns in the path of the flames.

The conflagrations, which broke out over the last week, have blackened an area larger than the U.S. state of Rhode Island and destroyed more than 500 homes and other structures. In addition to the fatalities, 43 firefighters and civilians have been hurt.

California Governor Gavin Newsom said crews were fighting 560 fires across the state, many of them sparked by lightning storms, straining resources to the breaking point as he seeks reinforcements from as far away as Canada and Australia.

“We are not naive by any stretch about how deadly this moment is and why it is essential … that you heed evacuation orders and that you take them seriously,” Newsom, a Democrat, told Californians at a news briefing.

The state has been hit by its worst dry-lightning storms in nearly two decades as close to 12,000 strikes here have sent flames racing through lands left parched by a recent heat wave. Some 175,000 people have been told to leave their homes.

In Santa Cruz, a city of around 65,000 people on California’s central coast, residents were told to prepare “go bags” as bulldozers cut fire lines and flames came within a mile of the University of California Santa Cruz campus.

A complex of blazes east of Palo Alto and another in wine country south of Sacramento are the seventh and tenth largest wildfires in state history, respectively, according to CalFire, and the agency warned that more dry-lightning storms were expected as early as Sunday.

‘SEND IN THE NATIONAL GUARD’

With up to 20 separate blazes burning in some lightning-fire complexes, firefighters and locals pleaded for more support.

“We’re still understaffed for a fire of this size,” said Daniel Potter, a CalFire spokesman, in reference to the Santa Cruz blaze where crews are working 72-hour shifts to save homes in towns such as Ben Lomond.

Four people died in the so-called LNU Complex fire in the North Bay area that has destroyed more than 480 homes and structures, including a winery as it burned over 219,000 acres in five counties. All evacuees were allowed to return to their homes in Vacaville on Friday as containment of the fire stood at seven percent.

A utility crewman died on Wednesday while on duty helping clear electrical hazards for first-responders at the same fire. Earlier that day, the pilot of a firefighting helicopter was killed in a crash in Fresno County.

“All our first responders are working to the ragged edge of everything they have,” state lawmaker Jim Wood said.

Plumes of smoke and ash fouled air quality for hundreds of miles around fire zones, adding to the misery and health risks of residents forced to flee or those stuck inside sweltering homes that lacked air conditioning.

Medical experts warned that the coronavirus pandemic has considerably heightened the health hazards posed by smoky air and extreme heat, especially for older adults and those already suffering from respiratory illnesses.