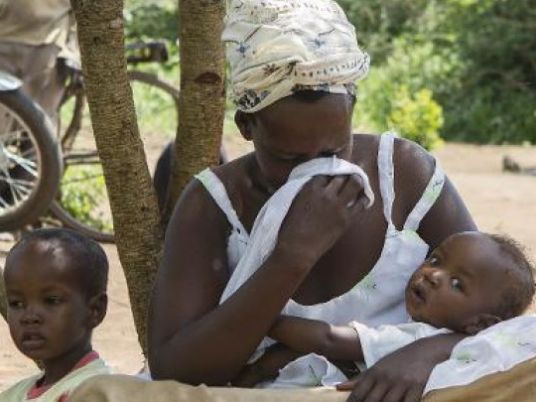 Kanani and Sylvia, brother and sister aged nine and eight, were grazing the family cattle in rural Uganda when they were approached by a man they vaguely knew.
Sperito Bisekwa was angry. He accused the children of allowing their cows to eat his fodder and dragged them into a nearby forest. He attacked Kanani first. When the boy awoke he had a machete wound on his neck and his sister lay dead beside him.
"He grabbed me, strangled me and cut the back of my neck. When I came to, I realized my sister had been cut everywhere and she was dead," said Kanani.
Sylvia's young body had been gruesomely mutilated, her heart and clitoris cut out with a knife and taken for use in a witchdoctor's ritual, according to police.
Child sacrifice is a disturbing and widespread phenomenon in Uganda, serious enough that the government has established a special taskforce.
Activists say child sacrifice is not about tradition, but greed as people seek a quick route to wealth or power and with elections due in 2016 they worry killings are set to increase.
Anti-Human Sacrifice Task Force
Child sacrifice is "expected to rise", said Moses Binoga, head of Uganda's Anti-Human Sacrifice and Trafficking Task Force.
"Now we are going into elections, you will find that there are so many Ugandans, even high profile people, going to witch doctors' shrines," said Binoga.
"Some of them will be so desperate that if they're told to win a seat as an MP 'You must sacrifice a child', they'll do it."
Binoga said there have been five reported cases of child sacrifice so far this year and nine last year, although those numbers are disputed with activists saying the actual figures are higher.
A sharp rise in reported cases of child sacrifice in 2009 spurred the setting up of Kyampisi Childcare Ministries (KCM), a charity that works with survivors and victims' families.
Child protection officer Shelin Kasozi said the charity receives a few cases every month, stressing that the ritual murders "cut across all Ugandan society".
"The rich believe, 'If I sacrifice then my business will prosper'," she said. "The poor believe if they sacrifice a child they'll get rich."
Genitals hacked off
Kasozi pointed to the case of "very, very rich" Kampala businessman Godfrey Kato Kajubi who received a life sentence in 2012 for the ritual murder of a 12-year old boy who was beheaded and his genitals cut off.
Cases of children disappearing as they walk between school and home, or while fetching water from communal wells, can be found across Uganda. Sometimes their dismembered body parts are later discovered in forests or building sites.
Kidnappings and ritual murders are commonly organized by witchdoctors whose clients pay for the killings in the belief that sacrificing a child will lead to wealth and prosperity, cure impotence or boost fertility.
Binoga said it was rare for the financiers to be prosecuted as witch doctors refused to name their clients.
Bisekwa pleaded guilty to the February 2013 attack in Nansaka village, 130 km (80 miles) northwest of the capital Kampala. He is serving a 10-year sentence for the attempted murder of Kanani and awaits sentencing for Sylvia's murder.
He admits sending the body parts to his brother, a witchdoctor, in exchange for the promise of US$16,500 (14,600 euros).
The children's distraught father, Joseph Nankunda, wants his daughter's murderer to be given a death sentence.
"I want the death penalty for him, so he can be an example for the others," said the 48-year-old cattle farmer and father of six.
"My heart beats faster every time my children take a long time coming back. I live in fear every day," said Nankunda.
In February Uganda's government drafted a National Action Plan to stem the killings and has approved a bill regulating traditional healers, some of whom practice as witch doctors.
One reformed witch doctor is trying to convert others and persuade them to destroy their shrines.
But Binoga warned child sacrifice may not be easy to stamp out.
"It is based on the mindsets of beneficiaries of the crime," said Binoga. "As long as we have people who have such a belief, that practice will continue."