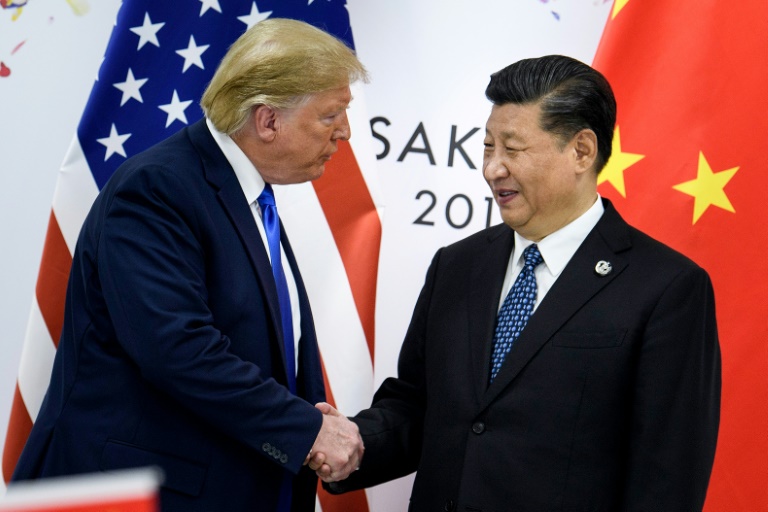 BEIJING (AP) — Expectations for a U.S.-Chinese trade truce rose Friday, though Beijing accused Washington of unfairly attacking its economy and said a settlement to their costly, 17-month-old conflict must be “mutually beneficial.”

A senior Trump administration official said an announcement regarding China would take place on Friday. The official spoke on condition of anonymity to discuss internal planning.

A “deal is close,″ said Myron Brilliant, the U.S. Chamber of Commerce’s head of international affairs, who was briefed by both sides.

Brilliant said the Trump administration agreed to suspend a planned tariff increase on $160 billion of Chinese imports due to take effect Sunday and to reduce existing tariffs, though it wasn’t clear by how much.

The interim “Phase 1” deal, which doesn’t appear to cover major U.S.-Chinese disputes, awaits final approval from President Donald Trump. Trump did not comment to reporters on the talks late Thursday when returning to the White House.

Trump declared on Twitter early Thursday: “Getting VERY close to a BIG DEAL with China. They want it, and so do we!”

Chinese officials gave no confirmation of a possible deal in comments that highlighted how far apart the two sides still are. There is no indication the “Phase 1” agreement extends to major disputes including U.S. complaints Beijing steals or pressures companies to hand over technology.

“Negotiations must be based on the principles of equality and mutual respect,” said a foreign ministry spokeswoman, Hua Chunying, repeating Beijing’s long-held position. “The deal must be mutually beneficial, a win-win.”

“The U.S. side has successively imposed unjustified restrictions and crackdowns on China in economy and trade, science and technology and personnel exchanges,” Wang said. “As far as China is concerned, what we are pursuing is our justified rights of development.”

Trump’s comments triggered a rally on Wall Street that carried over to Asian trading.

Beijing has threatened to retaliate if Sunday’s tariff hike goes ahead.

Trump announced the “Phase 1” agreement following talks in Washington in October but neither side has disclosed details.

Three Democratic senators — Minority Leader Charles Schumer of New York, Ron Wyden of Oregon and Sherrod Brown of Ohio — sent a letter to the White House on Thursday, urging Trump to “stand firm″ in the negotiations with China. They called on the president to hold out for “commitments from the Chinese government to enact substantive, enforceable and permanent structural reform.″

The administration accuses Beijing of cheating in its drive to develop advanced technologies as driverless cars and artificial intelligence.

The administration alleges — and independent analysts generally agree — that China steals technology, forces foreign companies to hand over trade secrets, unfairly subsidizes its own firms and throws up bureaucratic hurdles for foreign rivals.

Beijing rejects the accusations and contends that Washington is simply trying to suppress a rising competitor in international trade.

Despite the plans for an announcement, it’s not a done deal, noted Jeffrey Halley of Oanda.

“After such an interminable wait and having being led to water before, I would like to see something official in writing officially. Further to that point, although the in-principle agreement may have been agreed, the legally binding text has yet to be drawn up,” he said.

Since July 2018, the Trump administration has imposed import taxes on $360 billion in Chinese products. Beijing has retaliated by taxing $120 billion in U.S. exports, including soybeans and other farm products that are vital to many of Trump’s supporters in rural America.

On Sunday, the administration was set to start taxing an additional $160 billion in Chinese imports, a move that would extend the sanctions to just about everything China ships to the United States.

Repeated rounds of negotiations had failed to achieve even a preliminary agreement. The prolonged uncertainty over Trump’s trade policies has curtailed U.S. business investment and likely held back economic growth. Many corporations have slowed or suspended investment plans until they know when, how or even whether the trade standoff will end.

A far-reaching agreement on China’s technology policies will likely prove difficult. It would require Beijing to scale back its drive to become a global powerhouse in industrial high technology, something it sees as a path to prosperity and international influence.

Efforts to acquire foreign technology are a theme that runs through Chinese law and government. Security researchers have asserted that Beijing operates a network of research institutes and business parks to turn stolen foreign technology into commercial products.

The Trump administration has been seeking a way to enforce any significant trade agreement with China, reflecting its contention that Beijing has violated past promises. One way to do is to retain some tariffs as leverage.

US, China each say they are in no hurry for trade deal