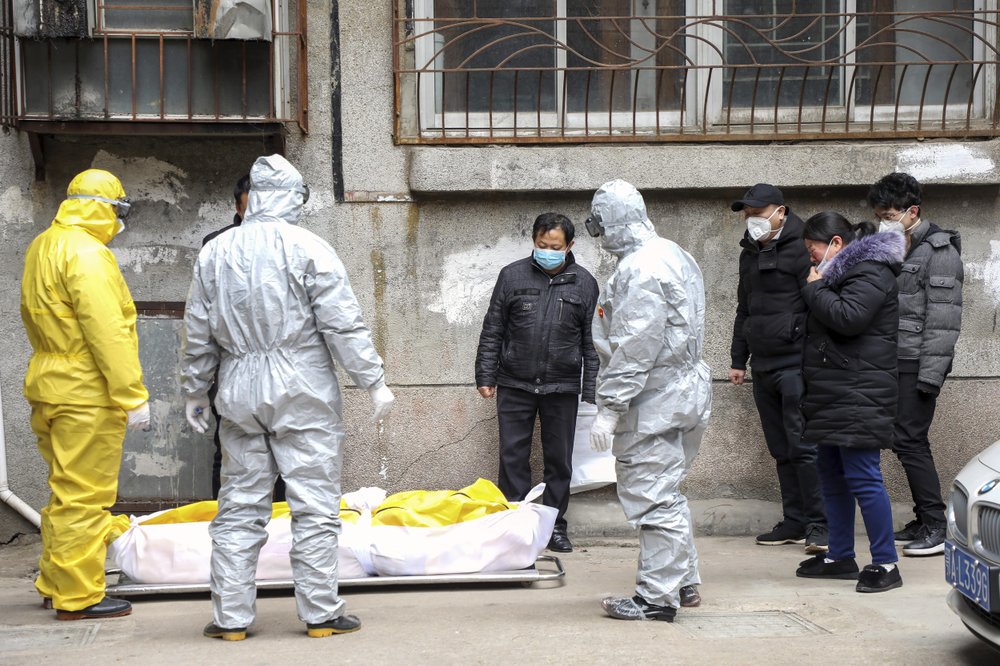 BEIJING (AP) — At least 50 percent more people died in China’s virus epicenter of Wuhan than previously counted, with state media on Friday attributing the initial undercount to how overwhelmed the health system was coping with thousands of sick patients.

The addition of 1,290 victims raised Wuhan’s death toll to 3,869, the most in China, and may confirm suspicions that far more people died in the city where the illness began than has been previously announced.

The total confirmed cases in the city of 11 million people also increased by 325 to 50,333, accounting for about two-thirds of China’s total 82,367 announced cases.

The revised Wuhan figures raised China’s death toll to 4,632, up from 3,342 announced by the National Health Commission on Friday morning.

The official Xinhua News Agency quoted an unidentified official with Wuhan’s epidemic and prevention and control headquarters as saying that during the early stages of the outbreak, “due to the insufficiency in admission and treatment capability, a few medical institutions failed to connect with the disease prevention and control system in time, while hospitals were overloaded and medics were overwhelmed with patients.

“As a result, belated, missed and mistaken reporting occurred,” the official was quoted as saying.

The new figures were compiled by comparing data from Wuhan’s epidemic prevention and control system, the city funeral service, the municipal hospital authority, and nucleic acid testing to “remove double-counted cases and fill in missed cases,” the official was quoted as saying.

Deaths occurring outside hospitals had not been registered previously and some medical institutions had confirmed cases but reported them late or not at all, the official said.

Questions have long swirled around the accuracy of China’s case reporting, with Wuhan in particular going several days in January without reporting new cases or deaths. That has led to accusations that Chinese officials were seeking to minimize the impact of the outbreak and wasting opportunities to bring it under control in a shorter time.

A group of eight medical workers, including a doctor who later died of the virus, were even threatened by police for trying to alert people about the disease over social media.

Chinese officials have stridently denied covering up cases, saying their reports were accurate and timely. However, the UN’s World Health Organization has come under criticism for defending China’s handling of the outbreak and President Donald Trump is suspending funding to the WHO over what he alleges is its pro-China bias.

Trump’s blaming of China came after he initially spent weeks showered praise on Chinese President Xi Jinping over the country’s performance in the pandemic, while largely dismissing the risk it posed to the US.

At the start of the outbreak, China proceeded cautiously and largely in secret, emphasizing political stability and the leadership of Xi’s ruling Communist Party.

More than 3,000 people had been infected before China’s government told the public that a pandemic was likely, something officials had concluded six days earlier.

The risk of sustained human-to-human transmission was also downplayed, even while infected people entered hospitals across the country and the first case outside China was found, in Thailand.

Officials even sought to shift blame to the US for the outbreak, with foreign ministry spokesman Zhao Lijian tweeting without evidence on March 12: “It might be US army who brought the epidemic to Wuhan … US owe us an explanation!”

Image: In this Feb. 1, 2020, file photo, funeral home workers remove the body of a person suspected to have died from the coronavirus outbreak from a residential building in Wuhan in central China’s Hubei Province. The central Chinese city of Wuhan has raised its number of COVID-19 fatalities by more than 1,000. State media said the undercount had been due to the insufficient admission capabilities at overwhelmed medical facilities at the peak of the outbreak. (Chinatopix via AP, File)