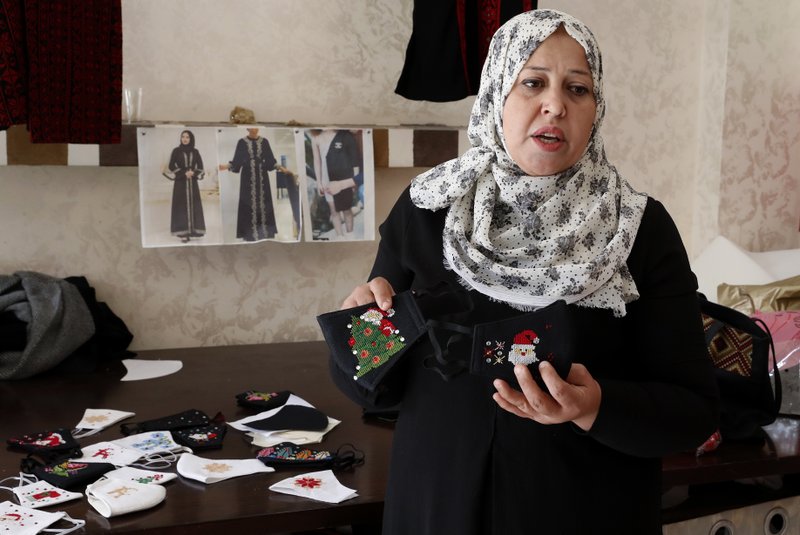 The masks, decorated with images of Santa Claus, reindeer and Christmas trees, have found markets as far away as Europe. They also have provided a small lift to a Palestinian enclave run by the Islamic militant Hamas group and where the vast majority of residents are Muslim.

“We exported the first 200 masks two weeks ago to France, last week about 300 to Germany and from 300 to 400 masks will be sent to Britain in the coming days,” said Suhad Saidam, owner of the workshop.

It’s a rare success story in impoverished Gaza, where unemployment has reached around 50%, and exports are severely restricted by Israel.

Saidam, who has been sewing for 16 years, says she sends the masks to Palestinian companies in the West Bank that export the goods. To be allowed out from Gaza through Israel and to the West Bank, the embroideries must be made of cloths and fabrics only. Decorated electronics, like watches, are forbidden, she said.

Israel, with Egypt’s help, imposed the blockade on Gaza in 2007 to isolate Hamas. Both countries cite security concerns and fear of arms smuggling to Hamas in justifying the restrictions.

The Christian population in Gaza, home to some 2 million people, has dwindled to about 1,000 as members of the tiny community have steadily emigrated. However, Christmas decorations can be widely seen on store fronts and at restaurants across the Gaza Strip.

Saidam, 43, opened the workshop in 2017 with support from Care International humanitarian agency under a program for breast cancer survivors like herself.

Saidam outsources the work to about 40 women, most of them suffering from cancer, to do the work at home “for a good income.” The Christmas-themed masks are sold for 15 to 20 shekels ($4 to $6). In Gaza, a typical daily wage is about 30 shekels ($9).

Wafa Tarifi, a resident of the West Bank city of Ramallah, learned of the masks from a Facebook page and was pleased when she saw them at a bazaar in Ramallah. “I bought some of them for my children’s Christian teachers and they liked it so much,” she said.

As COVID-19 vaccines are rolled out throughout the world, there might not be great demand for masks next year, but Saidam says she will continue to introduce traditional stitching for other occasions and events.

“We thought beyond the concept that hand-stitching is exclusive to the traditional Palestinian gowns,” she said.

Suhad Saidam, shows stitched images of Santa Claus and Christmas on face masks at her sewing workshop in Gaza City, Monday, Dec. 14, 2020. In the blockaded Gaza Strip, the Christmas season is giving a boost to Saidam’s business that produces pandemic face masks decorated with holiday symbols. They also have provided a small boost several dozen families in a Palestinian enclave run by the Islamic militant Hamas group. (AP Photo/Adel Hana)