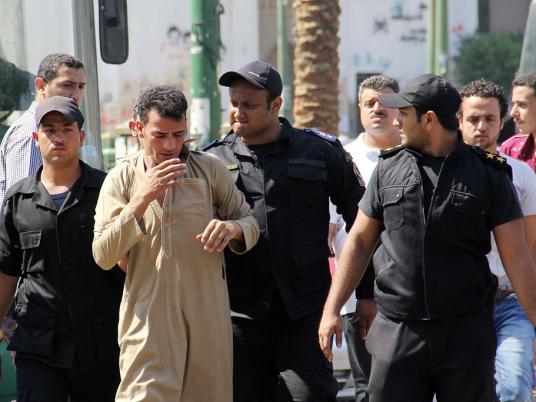 Clashes broke out Tuesday afternoon between families of detainees and Central Security Forces in front of an Abdeen court, where the trial of 119 suspects in the US Embassy clashes was taking place.

Activists and families of detainees had gathered there to express their solidarity with the suspects. Fighting reportedly broke out after defense lawyer for the Egyptian Organization for the Advancement of Childhood Circumstances, Ahmad Abdel Nabi, was denied entry to the court and beaten with batons by security forces. Tension had already been building because security forces had prevented families from bringing their relatives blankets and food.

“I was in the court, but went out to make some copies. When I came back, the security forces refused to let me in. I tried pleading with them and told them I am a lawyer, but they refused again,” Abdel Nabi said. “When I insisted, two of them started beating me with batons. The families of the detainees tried to save me, and before we knew it a clash broke out and rocks were flying both ways.”

Abdel Nabi's leg was injured during the clashes and he was rushed to a nearby hospital where he received two stitches. Moments later, when he was let inside the court upon return, an unrelated scuffle erupted inside the court.

“The suspects were brought in handcuffed and were handled roughly by security forces. When some of them objected to this, security forces descended upon them, beating them with batons, and closed all entrances to the court,” he said.

Abdel Nabi told Egypt Independent that the chaotic court session was concluded with the release of 50 minors and a 15-day extension of the detention of 69 others. On Monday, a judge had already ordered the release of 44 others detained in relation to the clashes.

These court scuffles come in the wake of clashes that broke out around the US Embassy in Cairo last week over an anti-Islam movie deemed insulting to the Prophet Mohamed. In the film, the Prophet is depicted as a womanizer and a religious fraud. The clashes resulted in the death of at least one protester and the injury of dozens more.

For three consecutive days, security forces used tear gas and birdshot to disperse around 200 protesters who were throwing rocks and petrol bombs. A widescale arrest campaign took place early Saturday morning, bringing the total number of detainees to over 400. They are being investigated on allegations of assaulting security forces, damaging public property, resisting authorities and possessing bladed weapons.

According to activist Maha Maamoun, who is a volunteer at the Front for the Defense of Protesters, most of the suspects are street children, street vendors and high school students who did not take part in the fighting and were arrested arbitrarily.

“Tahrir is a main hub for transportation and work, and what they did is a big clean-up campaign where they took anyone who was passing by, going to school or working, so that most had nothing to do with the violence,” she said, adding that around 30 to 40 percent of the detainees are minors.

Maamoun told Egypt Independent that many of those whose detention has been extended for 15 days after the initial four were tortured by Central Security Forces.

“I spoke to their families who visited them in prison, and many said their relatives had bruises and cuts on their faces and different parts of their bodies, in addition to wounds on their heads,” she said.

A lawyer for the rights organization Nazra, Mahmud Bilal, who is defending some of the suspects, confirmed Maamoun’s account.

“Nearly all my clients had clearly visible signs of beatings, but there was no way for me to tell if this happened during their arrest, or after, in prison. But all of them complained to me of being beaten and humiliated in different police stations, in Tora prison and even in locations where it is unlawful to detain people,” he alleged.

Bilal added that the police violated the law by declining lawyers' requests to visit their clients or refusing to disclose where they were being detained. Other violations, he alleged, include the detention of suspects in unfit locations and detention of children under 14 years of age.

He further confirmed that almost half of the detainees “could be called street children,” and that many others are street vendors “who were charged with assaulting police, only because they were selling tea without a license around Tahrir Square,” a place that until Saturday was teeming with street vendors and a hub for much of the informal labor that was cracked down upon as part of the arrest campaign. The street vendors are among those whose detention was extended an additional 15 days.

Bilal claims the prosecutors' reports prove detainees were arrested far from the scene of the embassy clashes.

“Some were taken from the Abdel Moneim Riad bus station on their way home, others were going to school. There is the case of four girls who were sitting at café After 8 and four students who were on their way to a birthday party in Mohamed Mahmoud [Street]. One man had just bought a wedding dress on Talaat Harb Street because he was supposed to get married last Thursday. They arrested him and stole the wedding dress. It is the most normal thing in the world that officers steal detainees’ belongings,” Bilal alleged.

Egypt Independent could not reach the Interior Ministry for comment.

A large Central Security Forces presence continues to occupy all entrances to Tahrir Square, now cleared of activists’ tents and street vendors for the first time in months, giving the square an almost sterile appearance.