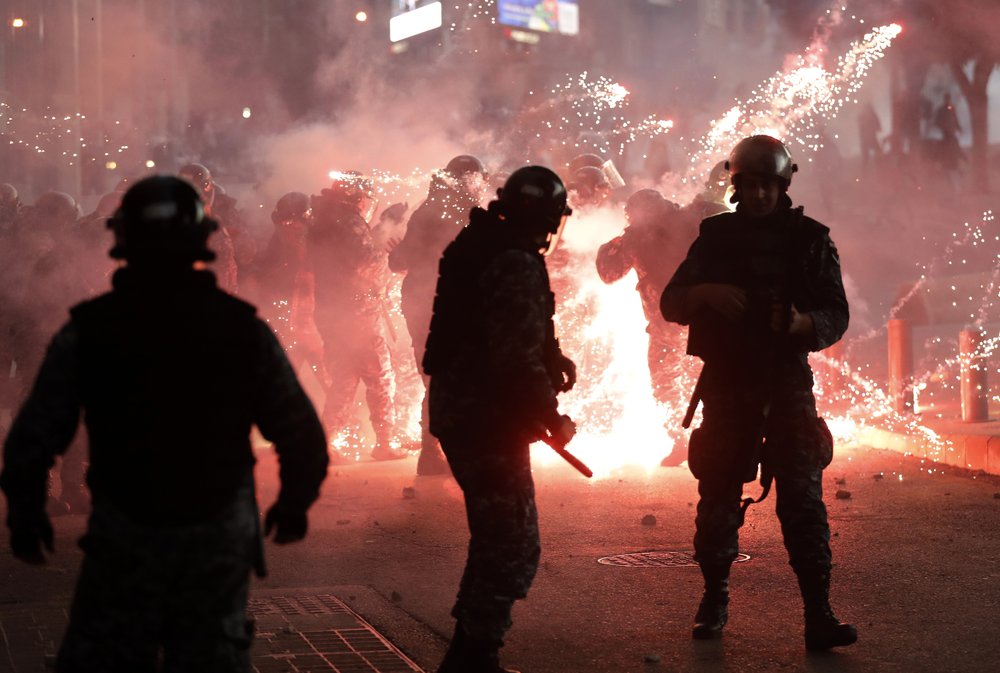 Protesters had returned despite a fierce crackdown by security forces the night before when clashes also injured dozens.

It marked the most violent unrest in the capital in a historic wave of protests that has swept Lebanon since Oct. 17 and pushed Saad Hariri to resign as prime minister.

The protests erupted from anger at a political elite that has overseen decades of corruption and steered the country toward its worst economic crisis since the 1975-1990 civil war.

Riot police and security forces, deploying again in large numbers, unleashed water cannons at hundreds of demonstrators who remained on the streets.

The Lebanese Civil Defense said it had treated 46 people for injuries and taken 14 others to hospital.

The clashes rocked a commercial district of Beirut for hours late into the night, and army soldiers closed off some roads.

Lebanon’s Internal Security Forces said they fired tear gas after demonstrators pelted them with fireworks and stones, injuring some officers. On Twitter, the ISF called on people to leave the streets.

Crowds of men and women ran for cover chanting “revolution, revolution!” as white smoke streaming out of tear gas canisters encircled them. Some hurled the canisters back at riot police standing nearby in body armor.

“They attacked us in a barbaric way, as if we’re not protesting for their sake, their children,” said a protester, Omar Abyad, 25, a nurse who has been unemployed since he graduated two years ago.

Abyad said he rallied on Sunday in part against Hariri’s potential return as prime minister, calling him one of the same faces who have long ruled the country.

Lebanon’s main parties have fueded over forming a new government, and Hariri is expected to be named prime minister again at formal consultations on Monday. But political rifts look set to hinder agreement on the next cabinet, which the country badly needs to ward off an even worse crisis.

Foreign donors say they will only help after there is a cabinet in place that can enact reforms.

Lebanon’s economic woes, long in the making, have come to a head: Pressure has piled on the pegged Lebanese pound. A hard currency crunch has left many importers unable to bring in goods, forcing up prices. And banks have restricted dollar withdrawals.

“There’s no work, no wages, no money, nothing,” Abyad said. “I am in the streets and I have nothing to lose.”

Image: Lebanese riot policemen react to firecrackers that were fired by the supporters of the Shiite Hezbollah and Amal Movement groups, as they try to attack the anti-government protesters squares, in downtown Beirut, Lebanon, Saturday, Dec. 14, 2019 (AP Photo/Hussein Malla)