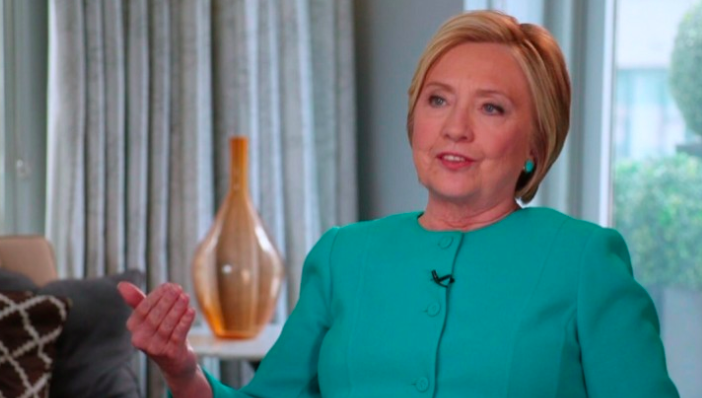 In interviews over the last week surrounding the release of her 2016 memoir “What Happened,” Hillary Clinton has been hugely critical of President Donald Trump. She’s suggested he is a misogynist and said repeatedly that she fears for the country with Trump in charge.

But in an interview Monday with NPR’s Terry Gross, Clinton raised that critique up a notch — not only questioning the legitimacy of Trump’s presidency but refusing to rule out the possibility of contesting the results if Russian collusion is proven by special counsel Bob Mueller.
Here’s the full text of the back-and-forth, courtesy of CNN’s Dan Merica:
Gross: I want to get back to the question, would you completely rule out questioning the legitimacy of this election if we learn that the Russian interference in the election is even deeper than we know now?

Gross: You’re not going to rule it out?

This a big deal. The 2016 Democratic nominee, who won the popular vote by nearly 3 million votes, is expressly leaving open the possibility that she would pursue legal action to invalidate the last presidential election.
I’ve paid close attention to what Clinton’s been saying since she lost the election and I have never heard her broach the possibility of a formal challenge of the results.
Knowing what we know of Clinton, it seems unlikely to me that she simply spoke off the cuff here, that this was just an unconsidered remark. She doesn’t really do that sort of thing.

Glen Caplin, a spokesman for Clinton, said after the interview aired that the former secretary of state “has said repeatedly the results of the election are over but we have to learn what happened.”

“I would hope anyone in America concerned about the integrity of our democracy would feel the same way if we got there. But we’re not,” Caplin said. “Right now Bob Mueller and several congressional committees are investigating to what extent the Russians impacted our election and who exactly helped them do so.”

And, context matters too. Clinton floated the idea of formally contesting the election after she said this about how she envisions her role in the party going forward: “I expect to be really active, and my voice, I’m going to keep out there. I’m not going to just go slowly and quietly into that good night.”

Given all of that, it’s logical to conclude Clinton knew what she was doing here.

The harder-to-answer questions are a) how she would go about challenging the election and b) what the prospects for such a challenge actually working might be.

Julia Azari, an associate politics professor at Marquette University, took both questions on in a piece for 538 earlier this summer. Here’s the key bit from that piece:

“Some legal scholars maintain that the language in Article II of the Constitution prevents holding a presidential election again, thus putting it beyond the power of the courts to order a re-vote, as they have occasionally done for other offices. Others suggest that there is legal precedent for a presidential re-vote if there were flaws in the process. One instance in which this question arose was the ‘butterfly ballot’ from the 2000 election, which may have caused some voters to choose Pat Buchanan when they meant to vote for Al Gore in Palm Beach County, Florida.”
The question then isn’t even whether Mueller is able to prove collusion. It’s whether that collusion can be proven to have directly affected actual votes. And, from what we know from every intelligence agency — at least to date — is that there is no evidence that any votes were changed as a result of Russian interference in the election. (Trump has made this point whenever the Russia investigation comes up.)
It is possible — but far from probable — that in the course of his investigation Mueller uncovers evidence of not only collusion but also examples of when that collusion changed actual votes. But that’s a long way from today.
Clinton acknowledges that difficulty in the interview with Gross. “I don’t know if there’s any legal constitutional way to do that,” she says of contesting the election results. She added: “There are scholars, academics, who have arguments that it would be, but I don’t think they’re on strong ground.” She does go on to immediately note, however, that elections have been overturned due to fraud in other countries. (Read the full transcript here.)
There is, of course, some level of irony in Clinton’s willingness to broach the possibility of contesting the 2016 election. Trump made headlines — when does he not? — when he refused to commit to honoring the election results in the days leading up to the vote. Trump repeatedly insisted the system was “rigged” against him. Even on election day, he was circumspect about whether or not he would accept the results; “So no, if I think everything’s on the up and up, that’s a lot different, and we can only see what happens, I hope it’s going to be very fair, I think we’re going to do very well,” he said on a Tampa radio station on November 8.
That Clinton is now holding open the possibility of formally contesting the results — even though it’s not clear what that would even entail — is yet another reminder that the 2016 election was unlike any we’ve ever seen before (or likely will ever see again).