When US Secretary of State Hillary Clinton met with a group of civil society members during her Cairo visit on Tuesday, she interrupted one of them when he explained to her that the military has been torturing activists in the Egyptian Museum.

“What!” she reportedly said in astonishment.

Hossam Bahgat, director of the Egyptian Initiative for Personal Rights, had spent a few minutes explaining to her how arbitrary procedures are taking place ahead of military trials and how military-sponsored torture has been abundant. He then spoke of repeated torture incidents perpetrated by the military.

“She was surprised when she knew that the museum has become the new torture camp,” he said.

The military has been resorting to military trials en masse as well as acts of torture to stop continuing pro-democracy protests, report victims and rights groups. In two particular incidents on 26 February and 9 March, the Armed Forces arrested around 180 people, some of whom were reportedly tortured, with some facing military trials.

At the meeting held at a hotel in Cairo, civil society activists told Clinton that US military aid should be discussed in the conversation between the US and the Armed Forces when the latter’s human rights violations are invoked.

Clinton ended the meeting with a reference to US legislation that authorizes limiting support to foreign governments that fail to comply with human rights standards. She was scheduled to meet with the Supreme Council for Armed Forces the following day and pledged to raise the issue with the council.

Egypt receives US$1.2 billion of US military aid annually, the second largest sum after Israel worldwide.

The Leahy Amendment, which Clinton referred to at the meeting, stipulates that security allocations made to military units abroad can be halted if the secretary of state has “credible evidence that such unit has committed gross violations of human rights…”

The provision has been previously used by human rights watchdogs to stop human rights violations by military units in Latin America, especially in Colombia. The provision’s implementation, however, requires the identification of the brigade implicated in violations.

For Human Rights Watch, the New-York based rights group, the Leahy Amendment might be a viable instrument in the face of increasing reports about human rights violations by the military.

“Earlier, we received reports of torture incidents, but they were isolated and less frequent. But after 26 February and 9 March, we noticed that torture is being used far more routinely,” said Heba Morayef, a researcher in the Middle East and North Africa division of Human Rights Watch.

Besides the amendment, which acts as an obligation for the US to observe the parties it funds, Morayef mentioned the Committee of Appropriations of the House of Representatives, “which draws domestic pressure on US foreign expenditure.” The Appropriations Committee supervises government expenditures and holds heavy political weight.

Regardless of US pressure, for Bahgat, the violations need to stop. “For me ending torture and establishing accountability is in the interest of the Armed Forces. They certainly don’t want to repeat the practices for which people started this revolution.” 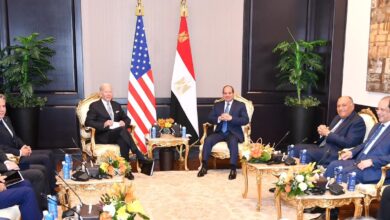