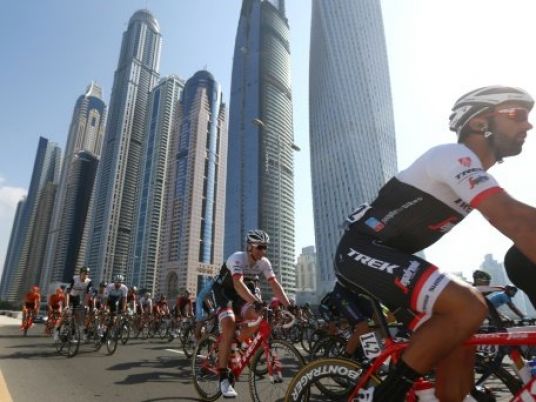 Want to drop 80 percent of the average U.S. annual income in one night?
Or maybe get some shuteye where Bill Clinton and Pavarotti have previously laid their heads (on separate occasions)?

The Middle East's most opulent hotel suites can deliver.
With acres of gold leaf and chandeliers at every turn, there's opulence and decor to make Liberace blush.
Throw in Jacuzzis, cinemas, butlers and fine dining, and those cavernous 12,000-square-foot chambers can soon fill up.
Sure the prices are high, but the money buys jaw-dropping views over sights including the Bosphorus, the Gulf of Oman and the world's tallest building.
And who knows, the hotels might even throw in a toothbrush for guests who forget theirs.
Here are nine of the most extravagant nights that platinum credit cards can buy.
Imperial Suite, The Palace Downtown, Dubai ($12,200 a night) 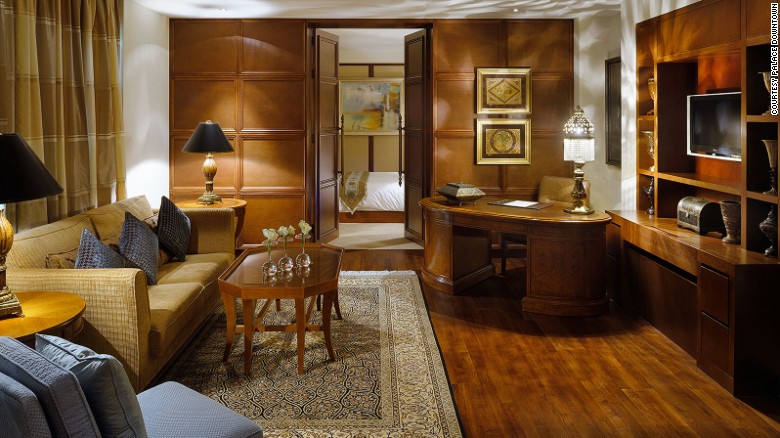 Room with a view. Or even two views: Imperial Suite, The Palace Downtown, Dubai.
The one-of-a-kind Imperial Suite at the Palace Downtown Dubai is 5,300 square feet of opulent living.
First, there are the views over the Dubai Fountain and up to the world's tallest building, the Burj Khalifa.
Just as well there are two private balconies for taking it all in.
The four bedrooms, each with their own bathroom, can sleep up to eight.
There's also a separate hot tub and plenty of other entertainment options — eight interactive TVs, along with additional screens in every bathroom, naturally.
The truly palatial suite's interiors have Middle Eastern themes and Arabian motifs throughout.
Chedi Club Suite, The Chedi Muscat, Oman ($2,000) 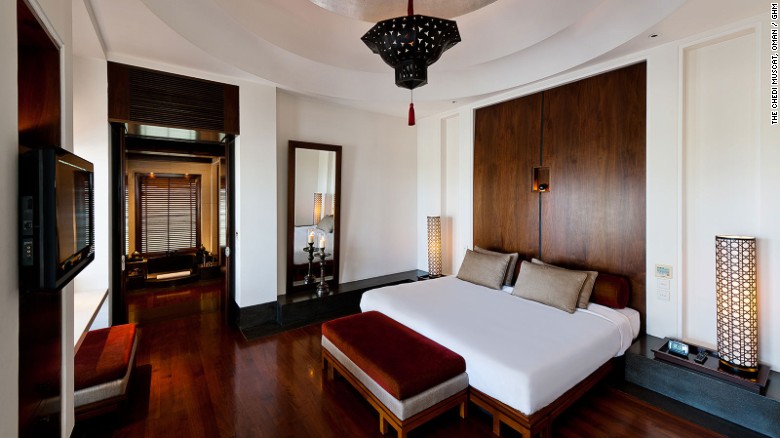 High ceilings, high class — The Chedi Muscat&#39;s Chedi Club Suite.
More breathtaking views, this time over a panorama of the Gulf of Oman and the Hajar Mountains.
The Chedi Club Suite has high ceilings and natural light which floods interiors which are minimalist in feel, especially when compared to other hotels across the region.
No need to anguish over whether to crack open the minibar, as there's no extra charge.
Guests can enjoy a free airport limo and also have access to The Club Lounge for breakfast, afternoon tea, cocktails and canapes.
A terrazzo sunken bathtub will help ease the stresses of a hard day's eating and drinking.
Royal Suite, The Burj Al Arab, Dubai (from $20,000) 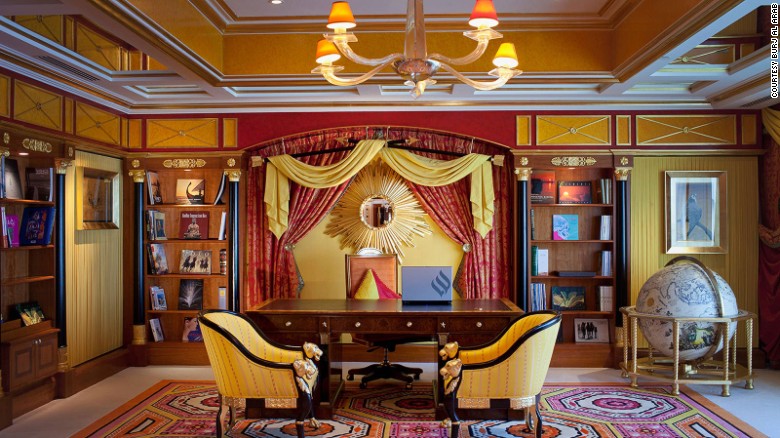 Rococo rendezvous: The Burj Al Arab's Royal Suite.
There's making a statement with a hotel suite, and then there's making a statement with a hotel suite in a building taller than the Eiffel tower, crafted in the shape of a billowing dhow sail on the Arabian Gulf.
The Burj's 8,400-square-feet Royal Suite has amenities including a private elevator, library and cinema, but it's the marble, gold and technicolor decor that'll live longest in the memory.
A rotating four-poster bed ensures guests can make the most of the views.
And playing "Candy Crush" doesn't get more flashy than on the 24-carat gold iPad offered throughout their stay.
Palace Suite, The Emirates Palace, Abu Dhabi ($15,000) 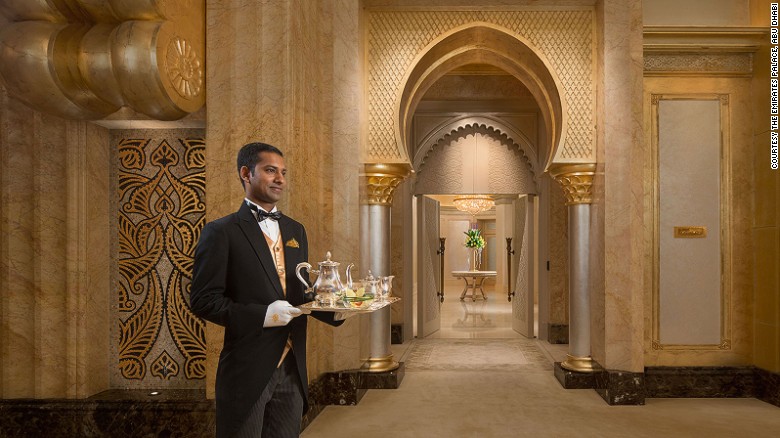 The 24-hour butler should have an easy job given how well equipped the Palace Suite is.
With Swarovski chandeliers and Daum glass sculptures, this is not a place to practice baseball swings.
Actually, since there's 7,500 square feet in the largest Palace Suite, which comes with three bedrooms, there's probably very little chance of hitting anything.
It's billed as "a palace within a palace."
An elegant dining room and pantry means there's no need to ask the 24-hour butler to order in a pizza, but that's no reason not to.
Royal Suite, The Ritz-Carlton, Bahrain ($3,450) 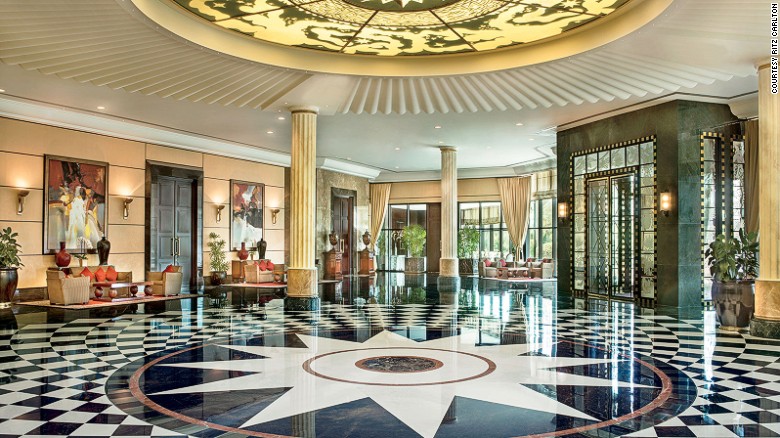 Bahrain bling: The Ritz-Carlton in Muscat.
The Royal Suite at the Ritz-Carlton in Manama comes in at $3,450 per night, giving 1,700 square foot of luxury for the money.
A dining room that seats eight, three LED TVs, a master bedroom, two bathrooms, a Jacuzzi and a large majlis — communal seating area — come as standard.
For those that can drag themselves away from the comfort of their room, the hotel has 600 meters of beachfront and four tennis courts for the active, as well as a spa for those who prefer more sedentary relaxation.
Sultan Suite, Ciragan Palace Kempinski, Istanbul ($35,700) 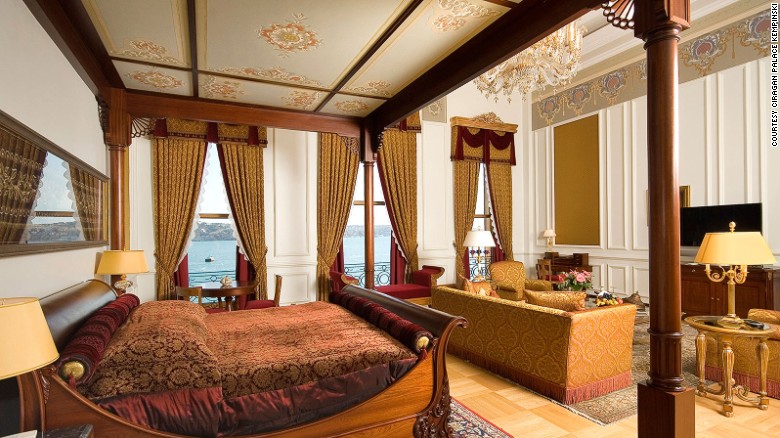 The Sultan Suite overlooks the Bosphorus.
What exactly does $35,000 a night get you?
Well in Istanbul, the most expensive and luxurious suite at the Ciragan Palace Kempinski.
Bill Clinton, Luciano Pavarotti and Bono have all called the Sultan Suite home over the years and it's hard to beat the location, on the shores of the Bosphorous facing the Asian side of the city.
This was an Ottoman Imperial Palace before becoming a hotel so the suite is furnished with 19th-century antiques that once graced the sultan's home, as well as state-of-the-art technology.
Visitors can take their pick of arriving at the hotel by car, yacht or helicopter.
The Royal Villa, Hilton, Kuwait ($1,640) 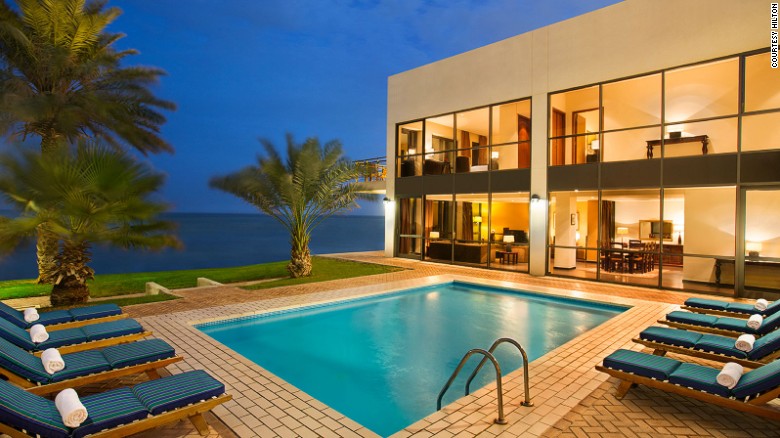 Splashy and flashy: The Royal Villa's private pool.
Located south of Kuwait City on the coast of Mangaf, the Royal Villa is a sprawling complex that, at a decidedly generous 7,018 square feet, there's a risk of getting lost in.
Although the seafront location over the Arabian Gulf is eye-catching, a private pool ensures guests can hit the water without hitting the waves.
The resort's extensive leisure facilities means there are plenty of other ways to tire oneself out.
Four bedrooms and six — yes, six — bathrooms over two floors make this a perfect family retreat with total privacy.
And at a mere $1,640, the price is a relative bargain compared with others on this list.
Kingdom Suite, Four Seasons, Riyadh ($10,666) 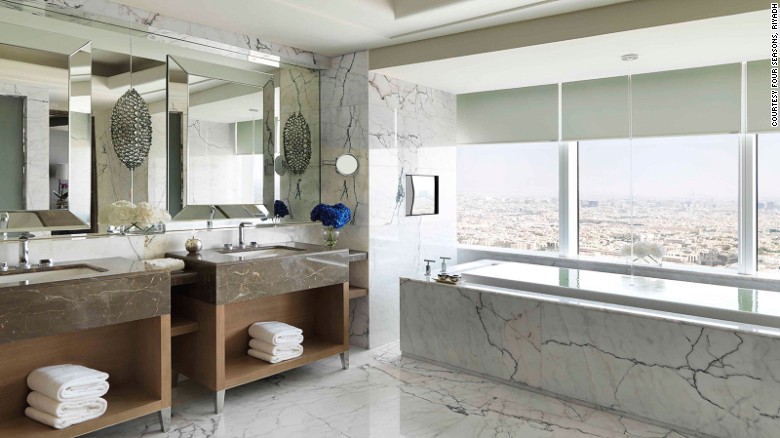 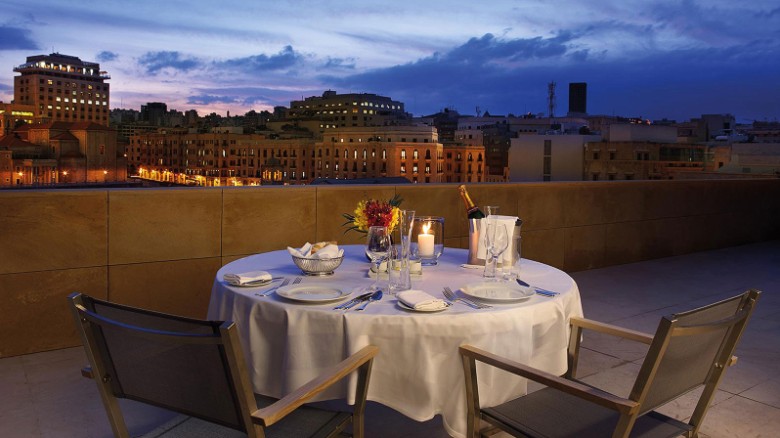 Rooftop restaurant: Le Gray, Beirut.
Five-star Le Gray in Beirut benefits from the city's frequent Mediterranean sun, nowhere more so than on the 5th floor Presidential Suite with its large private balcony.
Two bedrooms, two mosaic bathrooms, a living space and a walk-in dressing room fit in the 2,400-square-feet space.
There's a contemporary feel with bathrobes and towels by Porthault and TVs by Loewe.
The hotel has popular restaurants and bars including Cherry on the Rooftop and live jazz at Bar ThreeSixty.
The Abu Dhabi Suite, St. Regis, Abu Dhabi ($40,800) 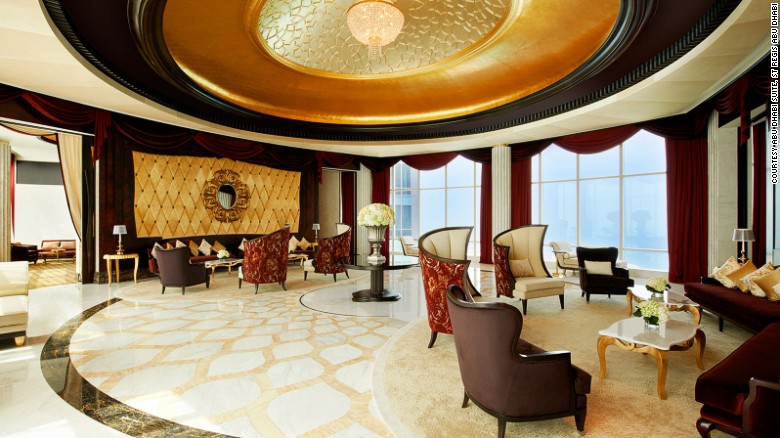 Big views, big money: The Abu Dhabi Suite at the St Regis.
Twelve thousand square feet is the size of some entire hotels, let alone one suite, but then again Abu Dhabi doesn't do things by halves.
Over two levels on the 48th and 49th floors, this is the world's highest suspended suite.
Five bathrooms go with three bedrooms, a cinema, spa with sauna and a "sky-bridge living room" from where the 360-degree views are as stratospheric as the price per night.