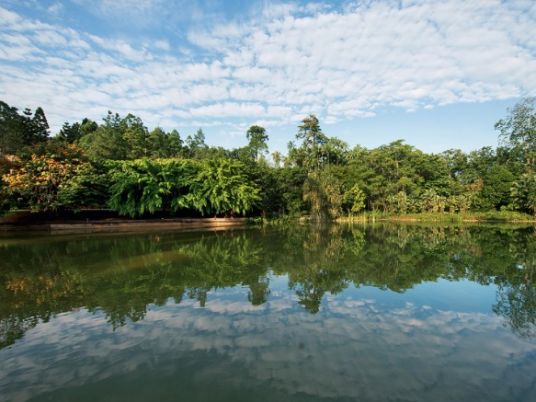 Sorry, Gardens by the Bay — you might have the world's largest vertical garden, but the 156-year-old Singapore Botanic Gardens is still the most iconic garden in the green-obsessed city-state.
This year, the 183-acre tropical garden paradise widely regarded as an icon of the so-called "garden city" was named a UNESCO World Heritage Site — Singapore's first.
Only two other botanic gardens have received the honor: the Royal Botanic Gardens in Kew, England, and the Padua Gardens in Italy.
It's the first garden in Asia and the first tropical garden to be recognized.
Visited by 4.4 million people each year — remarkable when you consider Singapore's entire population numbers 5.5 million — the Singapore Botanic Gardens may just be Asia's most fascinating garden.
British colonization and Japanese occupation 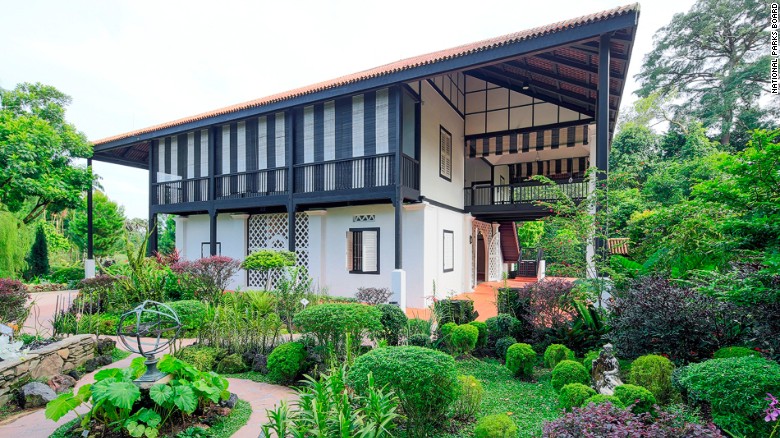 The 1867 Burkill Hall is one of the gardens' best viewing spots.
The Singapore Botanic Gardens is more than three times the age of Singapore itself (which celebrated its 50th anniversary this year), with a history dating to the British colonial era.
The garden was established in 1859 when Singapore was part of the Straits Settlements, a British colonial region administered by the East India Company.
Burkill Hall, a rare surviving example of an Anglo-Malay plantation house, is one of the many historical structures in the park.
Its second floor offers the best views of the gardens.
"This is the highest point in the gardens and from here I can see the National Orchid Garden, Palm Valley and the Rain Forest," says Dr. Nigel Taylor, the gardens' director. 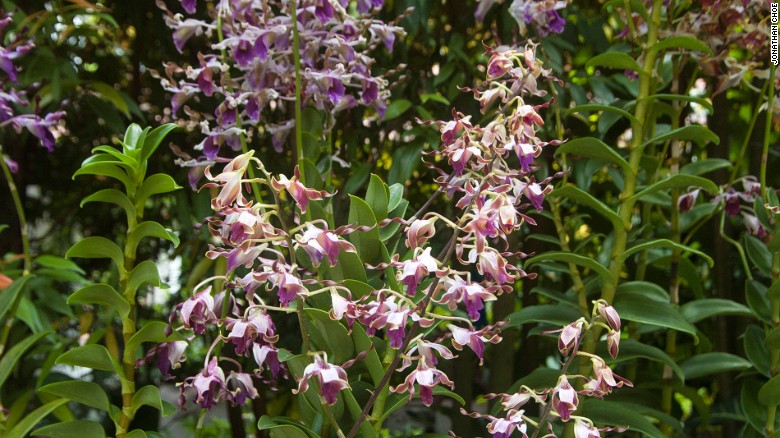 This orchid is named "Dendrobium Margaret Thatche" after the late UK prime minister, who was nicknamed the Iron Lady.
"There's something magical about being at this spot where I'm totally immersed in a sea of orchids and expansive greenery."
The Botanic Gardens was also the site of Singapore's first zoo.
Between 1875 and 1905, kangaroos, orangutans and rhinos lived here.
During the Japanese occupation of Singapore in World War II, the Japanese were protective of the gardens, and used a workforce of prisoners of war to maintain them.
There's a brick stairway still standing today that was built by Australian POWs.
Flora named after presidents and princesses 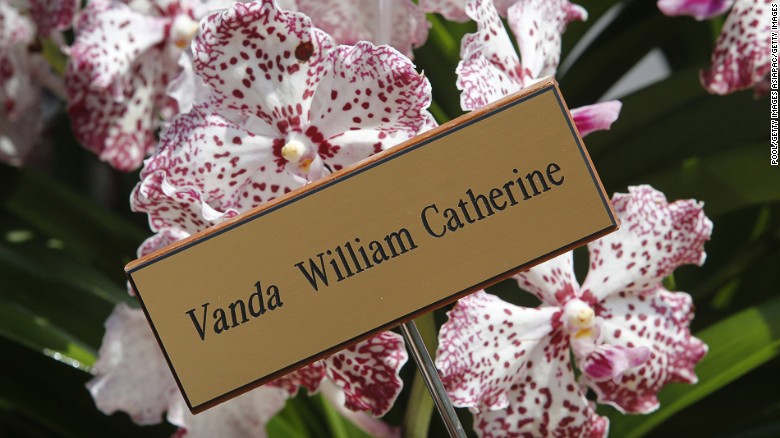 A VIP orchid named after the Duke and Duchess of Cambridge.
The Singapore Botanic Gardens has played a key role in the history of botany, with researchers investigating new agricultural technologies here since its inception.
It's estimated that 70% of the world's rubber trees can trace their roots to the gardens, where the process of turning rubber sap into latex was refined.
This created a huge rubber production industry across the region, which was partly responsible for the industrialization of Asia.
Singapore to this day is also one of the world's top centers for commercial orchid growing, with orchid hybridization pioneered in these gardens.
One of the highlights is the National Orchid Garden, which contains more than 450 species of orchids, many of which are on the verge of extinction in their natural habitats.
"Orchid diplomacy" is a Singaporean tradition — many hybrids have been named after celebrities and heads of state.
There are orchids dedicated to Margaret Thatcher and Princess Diana, singer Ricky Martin and, more recently, Chinese President Xi Jinping and his wife.
Singapore Botanic Garden trees have been named after VIPs as well. 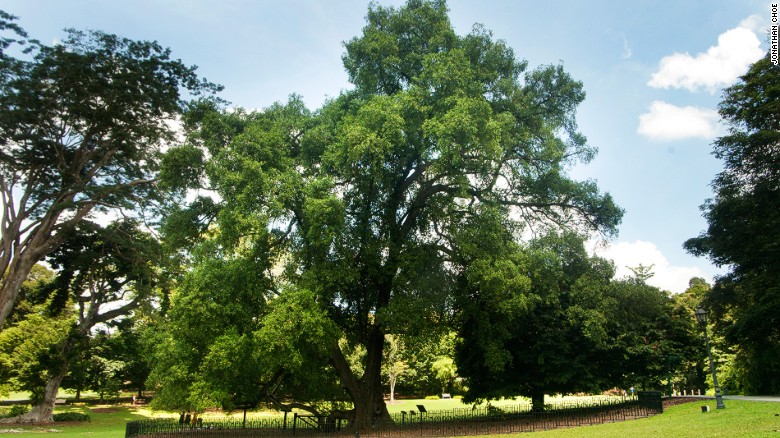 The evergreen Tembusu tree can grow to 40 meters in height.
It's home to 47 heritage trees.
One of the most famous is the Tembusu tree — more than 200 years old you can also see it on the Singapore $5 note.
Grounded in community
The Singapore Botanic Gardens hosts scores of joggers, picnickers and people doing early morning tai chi.
The garden often holds symphony performances on a floating platform inside a lily pond, aptly named Symphony Lake.
The Singapore Botanic Gardens is also a popular food destination.
Food for Thought is a popular casual dining spot. with Western dishes infused with Asian flavors.
More upscale Halia (the Malay word for "ginger") sits appropriately within the Ginger Garden and seats diners on a fabulous covered terrace with 360-degree views of lush greenery. 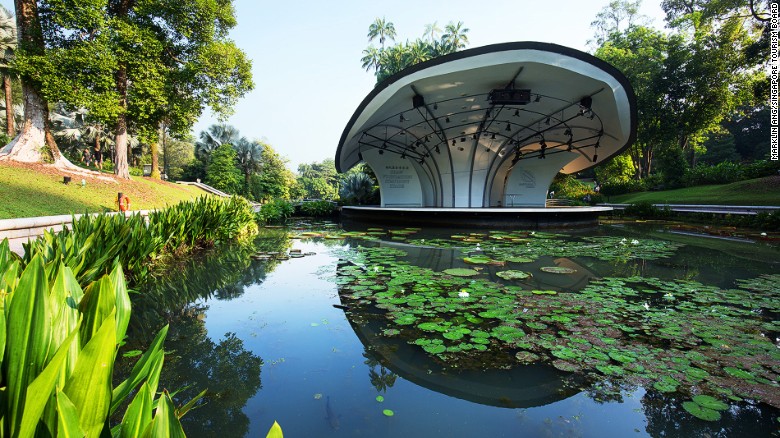 The Gardens' concert platform.
Visitors can take home an orchid from one of the monthly plant sales.
The Gardens will continue to get more impressive, with work underway on the 24-acre Tyersall Extension, to be completed in 2016.
This new area will be heavily forested with trees that can reach nearly 60 meters high.
Visitors will walk through the trees on an elevated boardwalk called the SPH Walk of Giants.
Singapore Botanic Gardens, 1 Cluny Road, Singapore; daily from 5 a.m. to midnight; free
National Orchid Garden, daily 8:30 a.m.-7 p.m.; adults S$5 ($3.50), students and seniors S$1