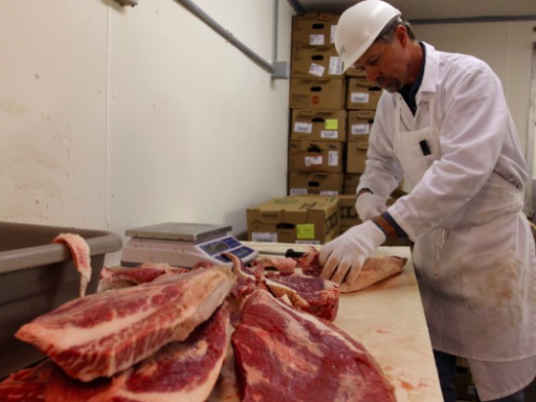 This is the story of a giant pile of beef.
Well, 1.27 pounds (0.58 kilos) of brisket, to be exact.
But before I get into the business of explaining where this meat came from, and why eating this stuff has a massive, unexpected effect on climate change, I feel the need to confess something: That huge slab of brisket, which came to me by way of Snow's BBQ, a delightful shack of a place out here in the heart of Texas beef country, easily was one of the most food-orgasm-y things I've tasted.
The phrase "OHMYGOD" dropped out of my mouth, involuntarily.
And I don't eat much meat.
A colleague of mine had a better line.
"I mean, f— Al Gore, right?"
I write about climate change for a living and appreciate what the former U.S. vice president has done (or has tried to do, in his own wooden way) to raise awareness about what I consider to be one of the most critical issues facing the planet and people. But, in that moment, I had to laugh and agree with my co-worker.
Forget the climate.
This stuff was too good. 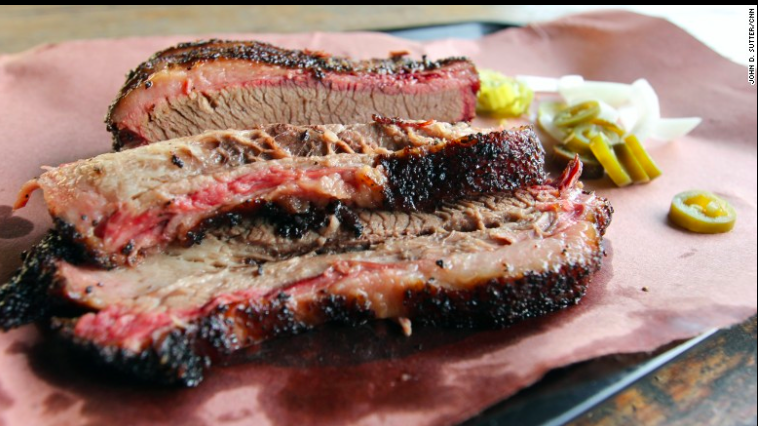 Snow's BBQ in Lexington, Texas, was rated the best barbecue in the state by Texas Monthly in 2008.

Daniel Vaughn, BBQ editor at Texas Monthly, and the No.1 carnivore I know — this is a man who has developed white bumps on his tongue, apparently from failing to eat nonmeat food groups — helped me dissect the meal. Note the salt-and-pepper "bark" at the edge of the meat, the red tree rings where the smoke that cooks the beef, slowly, overnight, has left its artistic mark. The cloudlike strips of beef were so tender locals insist you peel them apart with your fingers, not a fork and knife.

Knowing the beef's backstory only adds to the experience.

The barbecue "pitmaster" at Snow's is 80-year-old Norma Frances Tomanetz. White hair, red apron. Everyone calls her "Tootsie." Tootsie's shift starts at 9 p.m. and ends the next day after about 600 pounds of beef have been served. Her recipe is simple: salt and pepper. And, in addition to working here — again, at age 80 — she also serves as a middle-school custodian, helps manage a cattle ranch and takes care of two sick family members. (They could use your prayers, by the way.)

You want to root for them.

But there's "an inconvenient truth" about beef consumption, too, as I would discover on a trip through the supply chain of that meal: Beef is awful for the climate.

Don't blame me alone for bearing the bad news. In a Facebook poll, thousands of you overwhelmingly voted for me to report on meat's contribution to climate change as part of CNN's Two° series. You commissioned this highly personal topic over more widely feared climate change bad guys such as coal, deforestation and car pollution.

They're not often used in the same sentence.

But eating beef, as I'll explain, has come to be seen, rightly, in certain enviro circles, as the new SUV — a hopelessly selfish, American indulgence; a middle finger to the planet. It's not the main driver of global warming — that's burning fossil fuels for electricity, heat and transportation — but it does contribute significantly.

Globally, 14.5 percent of all greenhouse gas pollution can be attributed to livestock, according to the U.N. Food and Agriculture Organization, the most reputable authority on this topic. And a huge hunk of the livestock industry's role — 65% — comes from raising beef and dairy cattle.

Take a look at how beef compares with other foods. 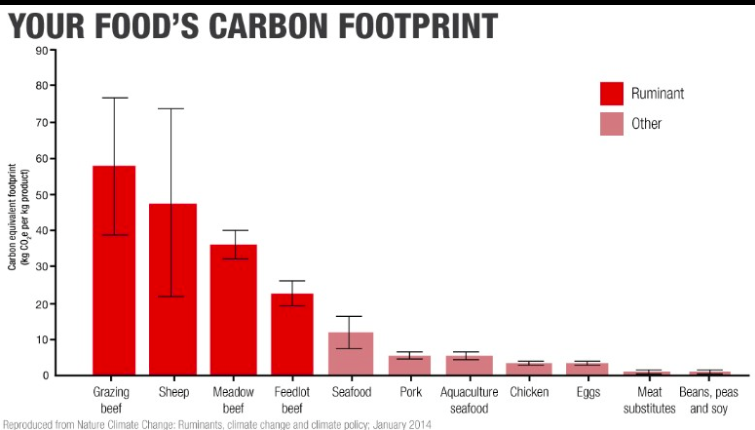 The world is faced with the herculean task of trying to limit warming to 2 degrees Celsius, measured as an increase of global temperature since the start of the Industrial Revolution, when humans began burning fossil fuels. That's the point at which climate change is expected to get especially dangerous, leading to megadroughts, mass extinctions and a sea-level rise that could wipe low-lying countries off the map. That one little number — 2 degrees — is the subject of international negotiations in December in Paris, which are critical if we're to avert catastrophe. 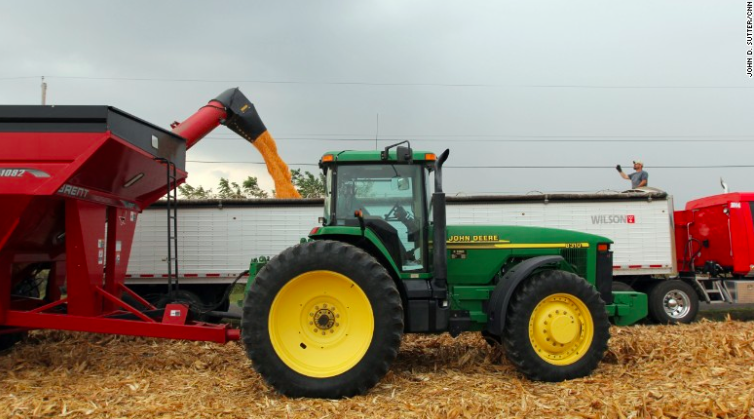 The fertilizer farmers apply to corn — which feeds many cattle — also contributes to climate change.
Niemeyer told me he "applies" 0.79 pounds of nitrogen fertilizer per bushel of corn. Some of that is "knifed" into the ground with giant farm equipment, and other times it's sprinkled on the surface of the land. Some of it is liquid, some of it is solid pellets.
Fertilizer is expensive stuff, and Niemeyer uses less than he used to — down from 1.2 pounds per bushel in the 1990s, he told me, proudly noting that this reduces pollution in a nearby lake and the Gulf of Mexico, which suffers an oxygen-dead zone in the summer because of excessive fertilizer runoff.
But it's still a huge amount. And one unwanted offshoot of all this fertilizer use — and something people out here aren't thinking much about — is nitrous oxide.
Nitrous oxide is kind of the ultimate greenhouse gas.
About 300 times as powerful as CO2.
Largely because of fertilizer, producing food such as corn for beef cattle accounts for 36 percent of greenhouse gas emissions from beef and dairy, according to the FAO.
When it comes to beef, it's second only to burps.
And growing food for our food takes a wider environmental toll.
About 70 percent of this planet's agricultural land is used for livestock production, according to a 2006 report from the FAO. And in total, 30 percent of all terrestrial land on Earth — all of it! — is used for livestock.
These are truly astounding figures.
True, some of that land is well suited for cattle grazing. "Eighty-five percent of the land we produce cattle on in the United States isn't suitable for other food production," said Daren Williams, spokesman for the U.S. National Cattlemen's Beef Association. "You can't turn the Flint Hills of Kansas into spinach fields."
"The argument that we should stop raising ruminant animals on land that is made for ruminant animals is frankly nonsense," he added. "We'd be taking vast amounts of land out of food production at a time when we need more not less" because of population growth.
These land-use choices do matter, though.
Internationally, for example, rainforests very often are cleared to make room for beef cattle. In the Amazon, cattle production accounts for an estimated 50 percent to 80 percent of all deforestation, according to Boucher from the Union of Concerned Scientists.
Deforestation is one of the reasons beef from Latin America and the Caribbean is among the worst, per pound, in terms of its effect on climate change. (Europe, North America, Russia and Australia are among the more-efficient beef producers, according to the FAO.)
"Cutting down forests means you're cutting down trees, and half of the tree is carbon," said Boucher. "When you burn it or let it rot, that produces carbon dioxide."
Carbon dioxide, of course, is a heat-trapping gas.
These so-called "land use changes" make up 15 percent of beef's overall contribution to climate change.
'Meth corn'
In Illinois, I watched cornfields zip by the window as Sean Bolton (spelled "like Michael Bolton," he told me) drove a truck full of Niemeyer's just-harvested corn down the highway to a towering grain elevator for storage. We could see a blue-gray rainstorm mounting on the horizon as we approached the drop-off.
Bolton is 43 and has spent his life doing odd jobs here and there, driving trucks, installing office cubicles — you name it. Lived all over: Texas, Phoenix, New Jersey, Idaho, Germany, Nebraska. He doesn't look past flaws in the corn industry.
"It's like meth corn, I guess you could say," he told me.
Meaning: This corn is grown with so much anhydrous ammonia, a fertilizer that's also an ingredient in methamphetamine ("You ever seen 'Breaking Bad?'" he asked), that you could compare it to an illicit drug. He sees this as somehow unnatural, which is a claim Niemeyer and others dispute, noting that technology and fertilizer have helped make corn much more resource-efficient.
But what about climate change?
Is Bolton concerned about that?
"I think climate change is a government scare tactic," he said.
Here's the thing, though: Whether he accepts climate science or not (the climate is changing, and we are to blame, as 97% of climate scientists agree), and whether he cares about beef's contribution to climate change or not, Bolton is eating less beef.
"Me and the wife eat a lot of chicken and pork these last few years," he told me.
Why?
"Because the price of steak has just skyrocketed."
"We splurge every now and then," he said, "but I'm not a billionaire, by any means."
Bolton isn't alone.
While the United States is one of the top meat-consuming countries, per capita, our rate of beef consumption actually has been leveling off for a decade or so. Take a look at the trend line. 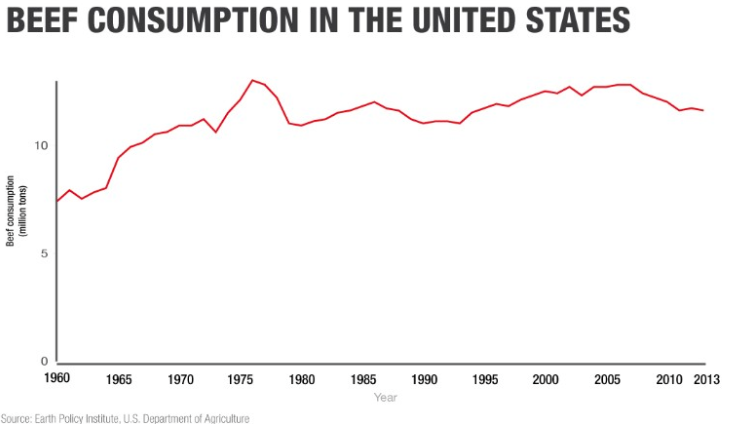 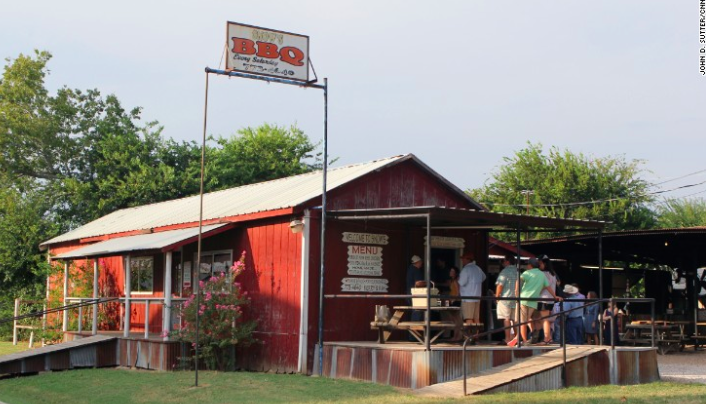 Aside from special events, Snow's BBQ is open only on Saturday morning.
Tomanetz, the 80-year-old pitmaster, beamed when she told me her restaurant was named the best BBQ place in Texas in 2008. "It takes a lot of tender love and care to prepare a brisket that's so well liked by so many people," she said.
So, to recap, this is meat that available only once per week.
You have to drive to the middle of nowhere to get it.
And it's some of the best in the world.
In other words: the definition of a treat.
Afterward, if you're me, you're so freaking full you never want to eat beef again.
I have to think that if more of us went on the Snow's diet — the once-a-week, beef-as-treat diet — we'd actually be OK. We need to wean ourselves from our addiction to fossil fuels, too, of course. Reducing beef consumption, alone, won't fix climate change.
But it would help ensure we hit the 2-degree target.
If you do go to Snow's, give Tomanetz a hug for me.
And, a word of advice: Order a smaller plate.
More than a pound of anything is way too much.
That's especially true for beef.