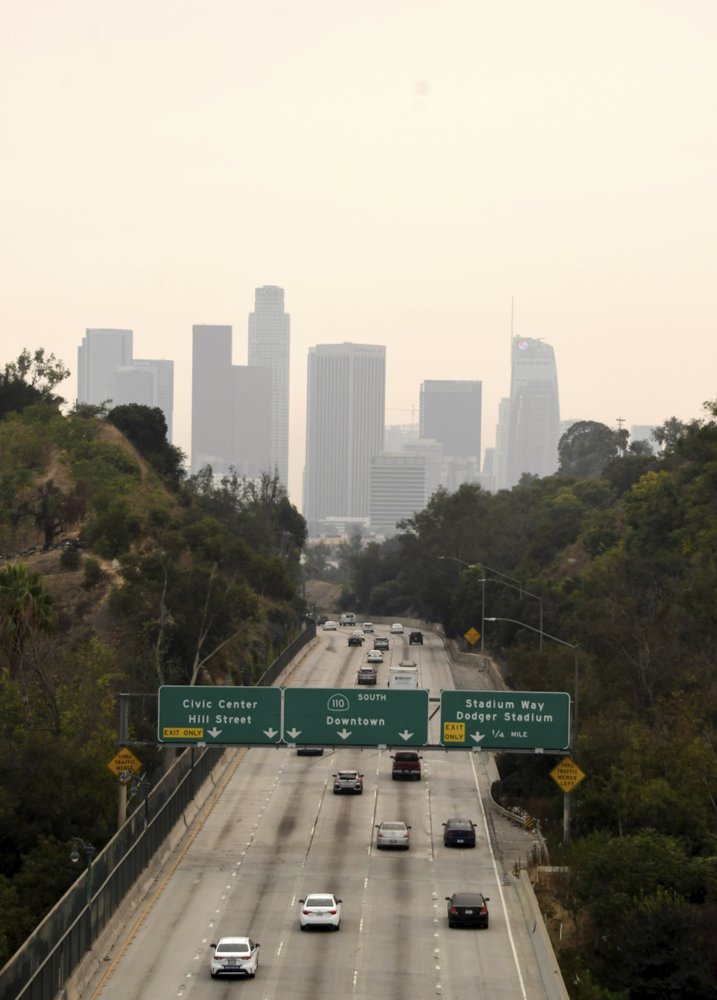 BERRY CREEK, Calif. (AP) —Smoke from massive wildfires that painted California skies orange was also helping crews corral the deadliest blaze of the year, but despite the progress there was concern that the death toll could mount as crews reach devastated areas.

Nine people, including a 16-year-old boy, have been confirmed dead since lightning-caused fires that started weeks ago fused into a monster that largely destroyed Berry Creek, a tiny hamlet in the Sierra Nevada foothills northeast of San Francisco.

Crews made progress Friday in chopping or bulldozing brush-free lines to control lne North Complex fire. In addition, gusting winds that whipped up the flames days earlier eased while smoke blocked out the sun and lowered previously scorching temperatures. Saturday’s high temperature was expected to top out at 80 degrees or less.

Nearly 15,000 firefighters were battling 28 major wildfires across California, although 24 were sparked Thursday and quickly contained.

The North Complex remained the deadliest this year, with nine confirmed deaths. Butte County Sheriff Kory Honea had said 10 bodies were found but on Friday lowered the figure. Honea said remains found in a burned storage shed turned out to be from a resin model of a human skeleton that was used by an anthropology student.

A search continued for 19 people who remained unaccounted for.

More victims could be found when search-and-rescue teams join sheriff’s detectives in the rugged mountain area but firefighters said it was too dangerous to immediately begin work in some places.

“Right now, the areas that we need to search are too hot,” Honea said.

The sheriff said the victims included Josiah Williams, 16, of Berry Creek, who apparently died while trying to flee the flames in a vehicle.

“He was alone, terrified and ran for his life,” his mother, Jessica Williams, told CBS13 Sacramento. “”My son was a good, smart, caring young boy that died alone and it kills me thinking about what he was going through.”

The body of Millicent Catarancuic, 77, of Berry Creek was found by a car on Wednesday, and two other people who may have been associated with her were found in the same area, the sheriff said. He did not release their names.

“We have information that those subjects were aware of the fire but chose not to immediately evacuate,” he said.

Catarancuic’s nephew, Zygy Roe-Zurz, told the Reno Gazette Journal his family had been packed up and ready to leave before deciding to wait when it appeared the fire threat was easing. Then, it made an explosive run.

“At the last minute they decided to stay,” Roe-Zurz said. “They decided they would wing it if they had to and that proved to be a really fatal mistake.”

The couple lived in the home with his mother, Suzan Violet Zurz, a painter and former model, who remained missing, he said.

This year already has seen shattered California records for the most area burned — more land than the state of Connecticut — and recorded the largest fire of all time in the state. Five of the top 10 biggest blazes in state history are still burning and fire season often gets worse in the fall. Some 4,000 homes and other buildings have been destroyed.

In Berry Creek, most homes were reduced to smoldering piles of ash, twisted metal and blackened appliances, although some were unscathed. Chimneys poked from rubble and burned out cars and pickup trucks dotted the landscape. Scorched utility poles and fallen wires lined the roads.

A bar, laundromat and two stores were gone. All that remained of a gas station were a pair of pumps and a sign listing prices. The school and volunteer fire station — with the engine still inside — were destroyed.

John Sykes fled his cabin when the winds started howling Tuesday and the skies became so dark from smoke that he had to turn on his lights at midday. He, his wife and a friend left with only a change of clothes each.

“All I could do is look in the rear view mirror and see orange sky and a mushroom cloud and that told me it was hot and to keep going,” Sykes said Friday. “It was a terrifying feeling.”

“There was no fighting this fire,” he said. “Those who tried to fight it are probably not here.”

“The debate is over around climate change. Just come to the state of California, observe it with your own eyes,” he said, citing the hottest August in state history, 14,000 dry lightning strikes in three days, record-breaking temperatures, drought and millions of dead trees.

Neighboring Oregon and Washington also have been besieged and air pollution is a major problem across the West. Oregon Gov. Kate Brown said Friday “dozens of people” are missing from the large wildfires that have burned across the state.

By BRIAN MELLEY and TERENCE CHEA

Image: Downtown Los Angeles lis in the background, looking south along the 110 freeway through the smoke from the Bobcat and El Dorado fires, Friday, Sept. 11, 2020. (Keith Birmingham/The Orange County Register via AP)

As California burns, the winds arrive and the lights go out