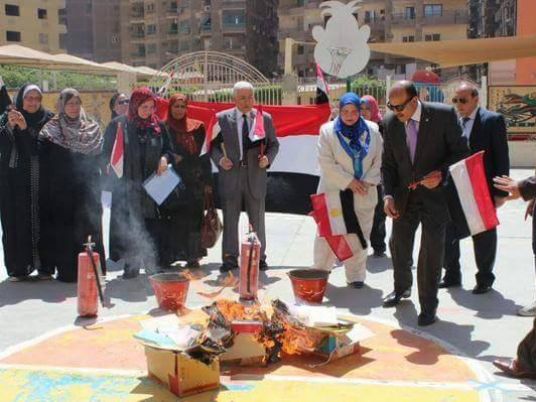 In a scene reminiscent of the burning of literature by renowned German intellectuals in Berlin square during the Nazi era in 1933, the Education Ministry's Giza department set fire to 75 Islamic books deemed to incite violence. The authors of the books are purportedly affiliated with the Muslim Brotherhood, according to department officials.
The department said it disposed of the books after taking stock of the Fadl Islamic School's library. This move is apparently part of a larger government drive to purge school syllabi of content deemed to support extremism and close down schools established by Brotherhood-affiliated owners.
Buthayna Kishk, who heads the ministry’s department, said that during the stock-taking process the ministry uncovered books that are not part of the syllabus and are actually banned in Egypt. She added that the authors of those books are “fugitives” and are now “based in Qatar”, referring to Brotherhood figures who fled to the Gulf kingdom following the ouster of former president and Brotherhood leader Mohamed Morsi from Egypt’s presidency in 2013.
Kishk said the destruction of the books aimed to “protect the children from the brainwashing” they were subjected to at those schools.
A statement by the school decried the measure, however, stressing that previous inspections by the ministry had not found anything wrong with the books. The school stressed it is not affiliated with any political group and that it had always abided by ministry regulations.
According to the statement, parents of students complained that the books were burned in the middle of the school day, adding that the officials made sure the situation was captured in photos.
According to the statement, the books included writings by prominent Salafi preachers Mohamed Hassan and Mohamed Hussein Yacoub, as well as former Mufti Abdel Halim Mahmoud and late legal scholar and professor Abdel Razeq al-Sanhoury.
Edited translation from Al-Masry Al-Youm