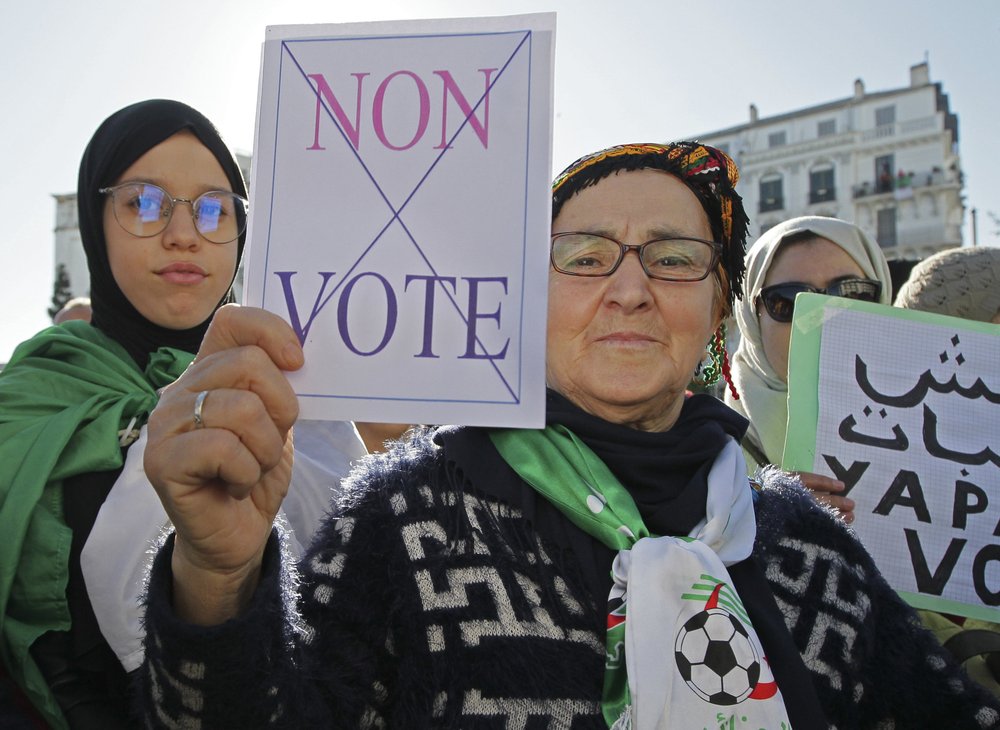 The five candidates seeking to replace President Abdelaziz Bouteflika in the Dec. 12 election have largely failed to captivate a disillusioned public. Bouteflika was pushed out in April after 20 years in power amid an exceptional, peaceful protest movement, and now demonstrators want a wholesale change of political leadership.

Instead, the election is managed by the long-serving power structure of this oil- and gas-rich country with a strategic role in the Mediterranean region. Instead of new faces, two of the candidates are former prime ministers and one is a loyalist of Algeria’s influential army chief.

The European Parliament condemned the arrests of protesters, prompting anger among some Algerians who accused the Europeans of interfering in Algerian politics — and inspired thousands of pro-government supporters to hold their own rally Saturday in support of the electoral process.

The candidates have tried to convince voters that taking part in the election is the only alternative to chaos, an allusion to the civil war that ravaged Algeria in the 1990s. But that argument falls flat among the protesters, who have been overwhelmingly peaceful, with demonstrators calming each other down and ensuring that no one provokes police. It’s a sharp contrast to the sometimes deadly protests and security crackdowns shaking Iraq, Lebanon and other countries in recent weeks.

Former Prime Minister Ali Benflis, considered a leading candidate, was heckled in Tlemcen, Guelma, Oued Souf, Annaba, while he had to cancel a meeting altogether in Maghnia on Algeria’s western edge.

His campaign director in the important region of Kabylie resigned, citing pressure from his family. Many in Kabylie oppose holding the election at all.

Candidate Abdelamdjid Tebboune, considered the candidate of army chief Gen. Ahmed Gaid Salah, had to cancel his first rally in Algiers because not enough people signed up.

His campaign manager also resigned, without explanation. And then one of his leading campaign funders was jailed on corruption charges.

Another candidate, Abdelakder Bengrina, began his campaign on the esplanade of the central post office in Algiers — the emblematic site of the protest movement. He had to interrupt his speech to dive into his car under police cover to escape a crowd of angry demonstrators. The portrait on the balcony of his campaign headquarters has been bombarded with eggs and tomatoes.

Many poster boards around Algiers meant to hold candidates’ portraits remain empty. In other sites, Algerians have covered the portraits with garbage bags and signs reading “candidates of shame.”

In some towns of the Kabylie region, protesters have blocked access to campaign offices by piling the entrances with bricks.

Tensions mounted last week when Algerians started holding evening marches to denounce the elections. Several demonstrators were arrested, and some have already been convicted to prison terms for disturbing election campaigns or destruction of public property, according to protest organizers.

Given troubles in the capital and Kabylie, the candidates are focusing on small campaign events in areas where the protest movement is less active.

The president of the body overseeing the election, Moahamed Charfi, has minimized the campaign troubles, saying the candidates are “accepted by the population.”

Army chief Gaid Salah has yet to publicly acknowledge the problems either, instead praising Algerians in a recent speech for “the adherence of the people around their army, chanting, with one voice, patriotic slogans expressing their collective the will to head massively to the polls on December 12, in order to make the presidential election succeed and thus contribute to build a promising future.”

If no candidate wins more than 50 percent in the first round, the election goes to a second round in the ensuing weeks.

Image: An Algerian demonstrator holds a placard that reads “no vote” as she stages a protest against the government and the upcoming presidential elections in Algiers, Algeria, on Friday, Nov.29, 2019 (AP Photo/Toufik Doudou)

Algerian protesters keep up pressure on authorities as vote nears

Five candidates to run in Algeria's presidential election next month