Egypt has announced an ambitious plan to expand mangrove forests by launching the largest mangrove planting project along the Red Sea, according to Sayyed Khalifa, director of the mangrove forestry project in the Governorate.

The project is funded by the Ministry of Scientific Research, in cooperation with the ministries of Agriculture and Environment and the Red Sea Governorate, he said. 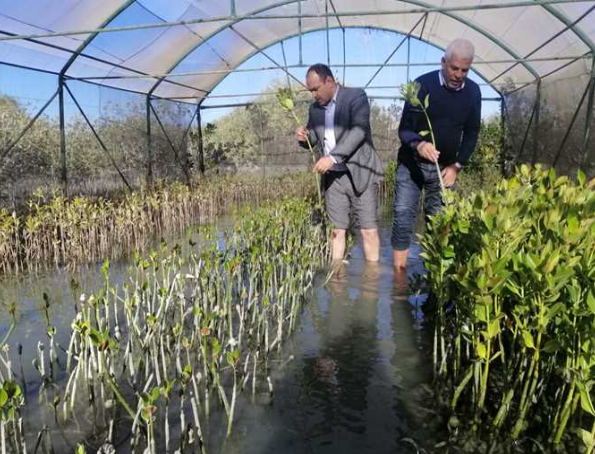 The project comes as part of efforts to address the risks brought on by climate change, according to Khalifa.

Khalifa added in a press statement on Thursday that the project also comes as part of Egyptian President Abdel Fattah al-Sisi’s directives to expand environmental tourism projects and take advantage of natural reserves.

Four plant nurseries have been established for mangrove trees in the Safaga, Hamata, and Shalateen areas of the Red Sea Governorate, as well as the Nabaq nature reserve in South Sinai.

The nurseries have been built on a total area of 500 feddans and are set to produce 300,000 seedlings a year, according to Khalifa.

Khalifa stressed that the project is one of a number of initiatives from the ministries to contribute to achieving sustainable development and reduce the negative impact of climate change in the country, especially in promising tourist areas like the Red Sea, where luxury resorts and world-class diving opportunities remain an important draw for foreign travelers.

Khalifa explained that mangrove forests are critical for bees, which, as pollinators, play an important role in the ecosystem by supporting the growth of trees, flowers, and other plants. He went on to say that the establishment of apiaries in mangrove forests would also provide job opportunities and contribute to producing high-quality honey. Expansion of mangrove planting on the Red Sea coast aims to maximize economic, environmental and tourism returns through scientific research, which is also part of the ambitious plans of the state in further developing beaches and achieving sustainable development, according to Khalifa.

Khalifa said that the expansion of the project should turn the Red Sea coast region into one of the most important tourist and environmental destinations in Egypt. The project will also contribute to improving the living conditions of local fishermen and workers, he added.

He argued that the project will protect beaches from erosion resulting from rising sea levels, commenting as well that mangrove trees are home to birds and other animals, and help to reduce the excess salinity of the surrounding area.

Mangrove trees are also linked with the growth of other organisms such as seaweed and coral reefs and play an important role in maintaining environmental stability and balance in the local ecosystem, Khalifa said.

Mangroves are salt tolerant trees and shrubs that grow in the inter-tidal areas of tropical and subtropical coastlines. They can also adapt to grow in low-oxygen areas and in places where freshwater mixes with seawater. While most live in muddy soil, mangroves can also grow on coral rock or sand.