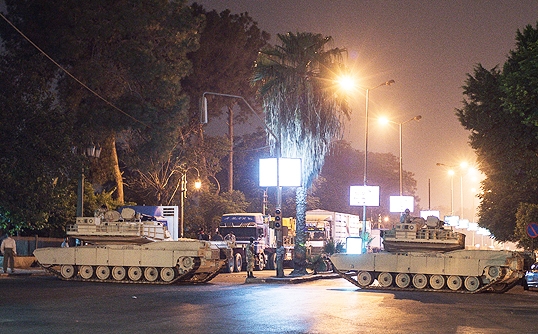 Mass protests called by Egypt's Muslim Brotherhood mostly failed to materialize on Friday as the movement reels from a bloody army crackdown on followers of ousted President Mohamed Morsy.

Troops and police had taken relatively low-key security measures before the "Friday of Martyrs" processions that were to have begun from 28 mosques in the capital after weekly prayers.

But midday prayers were canceled at some mosques and few major protests unfolded in Cairo, although witnesses said at least 1,000 people staged a march in the Mohandiseen district.

There were no reports of violence in that procession, but the Brotherhood's website said one person had been killed in the Nile Delta town of Tanta in clashes with security forces.

Brotherhood supporters also turned out in Alexandria, several Delta towns, the Suez Canal city of Ismailia, the North Sinai town of Rafah, and Assiut in the south, with minor skirmishes reported in some places.

"We are not afraid; it's victory or death," said Mohamed Abdel Azim, a retired oil engineer who was among about 100 people marching slowly from a mosque near Cairo University.

"They intend to strike at Muslims," the grey-bearded Azim said. "We'd rather die in dignity than live in oppression. We'll keep coming out until there's no one left."

Despite his defiant words, the mood of the protesters seemed subdued, perhaps a sign that the crackdown and the round-up of Brotherhood leaders has chilled the rank-and-file.

Some marchers carried posters of Morsy, who was toppled by army chief General Abdel Fattah al-Sisi on 3 July after huge demonstrations against his rule.

"No to the coup," they chanted.

"GOD WILL BRING DOWN SISI"

At another small protest in Cairo, a veiled nursery teacher with four children, who gave her name as Nasra, said: "God will make us victorious, even if many of us are hurt and even if it takes a long time. God willing, God will bring down Sisi."

Egypt has endured the bloodiest civil unrest in its modern history since 14 August when police destroyed protest camps set up by Morsy's supporters in Cairo to demand his reinstatement.

The violence has alarmed Egypt's Western allies, but U.S. President Barack Obama acknowledged that even a decision to cut off U.S. aid to Cairo might not influence its military rulers.

But he said Washington was re-evaluating its ties with Egypt. "There's no doubt that we can't return to business as usual, given what's happened," he told CNN in an interview.

Some U.S. lawmakers have called for a halt to the $1.5 billion a year in mostly military assistance to Egypt to bolster its 1979 peace treaty with Israel in 1979. Military cooperation includes privileged U.S. access to the Suez Canal.

The Brotherhood, hounded by Egypt's new army-backed rulers, had called for demonstrations across the country against the crackdown, testing the resilience of its battered support base.

Security forces kept a watchful eye, but did not flood the streets, even near Cairo's central Fateh mosque, where gun battles killed scores of people last Friday and Saturday.

The mosque's metal gates and big front door were locked and chained. Prayers were canceled. Two armored vehicles were parked down the street, where people shopped at a busy market.

Only one riot police truck stood by near Rabaa al-Adaweya square in northeastern Cairo, home to the Brotherhood's biggest protest vigil until police and troops stormed in, killing hundreds of people, bulldozing barricades and burning tents.

The mosque there was closed for repairs. Workmen in blue overalls stood on scaffolding as they covered its charred walls with white paint. Children scavenged through piles of garbage.

Troops used barbed wire to block a main road to al-Nahda Square, the site of the smaller of the two Brotherhood sit-ins.

The authorities declared a month-long state of emergency last week and they enforce a nightly curfew.

They have also arrested many leading figures from the Brotherhood, all but decapitating an organization that won five successive votes in Egypt after the overthrow of Hosni Mubarak in 2011.

In a symbolic victory for the army-dominated old order, Mubarak, an ex-military man who ruled Egypt for 30 years before he was toppled, was freed from jail on Thursday. His successor Morsy, Egypt's first freely elected president, remains behind bars.

The Brotherhood's Supreme Guide Mohamed Badie, who was arrested on Tuesday, is due to go on trial on Sunday along with two other senior figures, Khairat al-Shater and Saad al-Katatni, on charges that include incitement to violence.

More than 1,000 people, including over 100 soldiers and police, have been killed in violence across Egypt since Morsy's overthrow. Brotherhood supporters say the toll is much higher.

Graffiti on a mosque wall in a rundown Cairo neighborhood illustrated the deep divisions that have emerged since Sisi's takeover. The spray-painted message "Yes to Sisi" had been crossed out and painted over with the word "traitor."

Slogans elsewhere read "Morsy is a spy" and "Morsy out." Someone had also written "Freedom, Justice, Brotherhood."

The Brotherhood, founded in 1928, operated mostly underground before emerging as Egypt's best-organized political force after Mubarak fell. Its popularity waned during Morsy's year in office when critics accused it of accumulating power, pushing a partisan Islamist agenda and mismanaging the economy.

Mubarak, 85, still faces retrial on charges of complicity in the killings of protesters, but he left jail on Thursday for the first time since April 2011 and was flown by helicopter to a plush military hospital in the southern Cairo suburb of Maadi.

The authorities have used the state of emergency to keep him under house arrest, apparently to minimize the risk of popular anger if he had been given unfettered freedom.