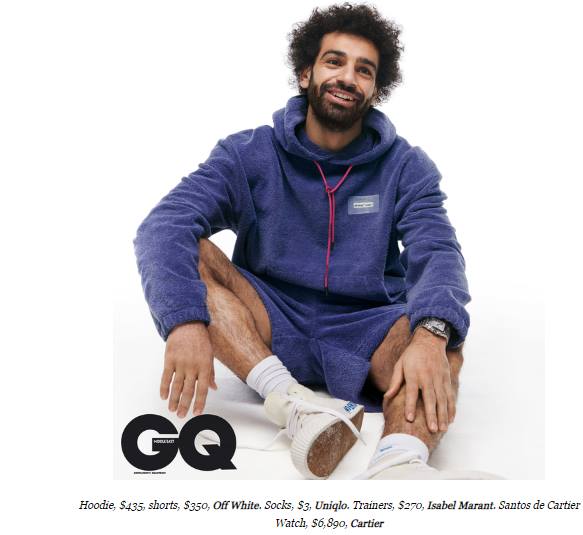 Egyptian footballer Mohamed Salah and international actor Mena Massoud were recognized at the GQ Middle East Men of the Year Awards in a ceremony hosted by famed Egyptian satirist Bassem Youssef in the UAE on Monday, October 7. Salah won the overall award for Man of the Year and Massoud won the award for Breakthrough Talent.

The ceremony was attended by numerous public figures, among whom were several Egyptians artists including renowned actor Youssra and rising star Jamila Awad.

The two Egyptian winners received the awards alongside several Middle Eastern artists from various industries including film, fashion, poetry, sports and more. The magazine celebrated the winners’ achievements, which have enriched the region and revived its culture.

Known for his irresistible sense of humor, Youssef introduced Salah while displaying funny photos of the Egyptian footballer, prompting all the attendees to cry laughing. Satirist Youssef is known as Egypt’s John Stewart for his presence on the satirical program Al-Bernameg, which poked fun at the Egyptian government and many public figures. Youssef announced in 2013 that he would seek a safer environment abroad, and Al-Bernameg would be off the air for good.

“Each time he steps on a pitch, Mohamed Salah balances the expectations of a nation – and one of the world’s most famous football clubs. It’s the kind of pressure that can make or break a man … but this much we know: Salah won’t be stopped. That’s why he’s our Man of the Year,” The magazine said about Mo Salah, also underscoring his strong morals and constant desire to advance his career.

Last month Liverpool striker Mohamed Salah took fourth place on the Best FIFA Men’s Player award list, according to results released by FIFA on Monday, September 23. The Egyptian football superstar is no stranger to FIFA’s list, having been nominated for the same award last year.

Salah is also a back-to-back golden boot winner. He scored 32 Premier League goals last season, making it to the finals. He was selected as the PFA Player of the Year ahead of Manchester City title-winner Kevin De Bruyne.

The legendary Egyptian player also won African Player of the Year for the second consecutive year in 2018. He is the fourth African player to snatch this title back-to-back, following El Hadji Diouf, Samuel Eto’o, and Yaya Touré.

Egyptian-Canadian star of Disney’s Aladdin (2019) Mena Massoud won the Breakthrough Talent category at the GQ Middle East Men of the Year Awards. A feature on Massoud in GQ discussed Massoud’s performance in Aladdin as well as the film’s $1 billion earnings at the box office but also said, “Away from the big numbers and global worship, Massoud hasn’t lost site of the bigger picture when it comes to actors of Arab heritage.”

Directed by Guy Ritchie, “Aladdin” (2019) is a re-adaptation of Disney’s acclaimed 1992 animated film, which in turn is based on the fairytale. The remake features inventive special effects and magical, attractive colors inspiring audiences new and old across the world.

Massoud was recently selected to be an ambassador for the “Speak Egyptian” initiative organized by the ministry of migration. Moreover, he recently started a foundation called the Ethnically Diverse Artists (EDA) foundation to support Canadian artists. At El Gouna Film Festival, Massoud announced that he selected the filmmaker Nesrine Eradi as the first to receive this award.