Some kids pull the wings off of flies. Others incinerate ants under magnifying lenses. Amr Mohamed wants to take things one step further — he wants to send spiders into space. Zebra spiders, to be precise.

This is not evidence of a chemical imbalance on his part, or a sadistic sense of humor, but rather “curiosity” he explains with a shrug. While some may laugh off the 18-year-old’s ambitious proposal, and the matter-of-fact nature with which he discusses it, there’s a good chance that in a few months’ time, a team of arachnid astronauts will be grappling with the effects of weightlessness — and they’ll have the young Egyptian to thank for it.

Last month, Amr emerged as the regional finalist in the YouTube SpaceLab, a global science competition that challenges 14- to 18-year-olds to design an experiment specifically to be performed in space. The only Egyptian out of the 2,000-plus applicants who responded to the call, Amr’s proposed experiment took him through the selection process and the following elimination round, which slashed the 60 finalists down to just six, split between two age groups (14- to 16-year-olds and 17- to 18-year-olds) and three regions (the Americas, Asia-Pacific, and Europe/Middle-East/Africa).

For his entry to the competition — which is being held in cooperation with the National Aeronautics and Space Administration, the European Space
Agency and the Japan Aerospace Exploration Agency — Amr proposed sending zebra spiders to space to observe whether they would adapt to a zero-gravity environment.

Should he be announced one of the competition’s two winners, his experiment will be performed 250 miles above the Earth’s surface aboard the International Space Station and streamed live on YouTube, for those interested in watching.

Which, according to Amr, should be everyone.

Although none have so far achieved Laika-levels of fame, spiders have been sent to space before — by students, and, as recently as 2008, for an experiment that saw them successfully spin webs in zero-gravity.

Amr, however, wants to do things a little differently.

Despite being among the most common types of spider in the world, the zebra spider lacks one quintessentially arachnoid feature.

“They can’t spin webs,” Amr explains. “They’re jumping spiders. They attack their prey by pouncing on them.” Instead of a web, zebra spiders will produce a single strand to anchor them to whatever surface they may be leaping from. If they miss their target, they can climb up to their original starting position and give it another shot.

That means that unlike their web-spinning brethren, zebra spiders heavily depend on gravity to feed. Amr’s hypothesis is that, over the three-day span of the experiment, his spiders will be able to adapt.

The idea wasn’t a spontaneous one. Between first hearing of YouTube SpaceLab and settling on a proposal, Amr spent three months trying to come up with the right experiment.

“I was reading about different creatures that had been sent to space, specifically spiders,” he says, when he struck upon the notion of sending a variety incapable of web-spinning into space “in order to determine any physiological or anatomical changes that might occur.”

A question which, for a lot of people, can be succinctly answered with another: “Who cares?”

For starters, anyone with an interest in the ultimate survival of the human race.

“We’re depleting our planet’s resources,” Amr explains, referencing world-renowned astrophysicist (and YouTube SpaceLab panel member) Stephen Hawking. “The only way the human race will continue to thrive is if it finds other inhabitable planets.”

If and when humans do find a suitable planet to colonize, we’ll have to pack up our spiders — along with all other forms of life — for the big move.

“In order for humans to survive, you have to keep the system supporting them intact,” Amr explains. Eliminating, or leaving behind, any of the food web’s cast members — including non-web-spinning zebra spiders — could have potentially devastating consequences for human life. “If we get rid of frogs, we’ll be drowning in cockroaches,” Amr says.

“We’re among the [youngest] species on the planet,” says Amr. “We can’t just drain it of its resources and move on without thinking of the countless other life-forms that were here long before us.”

“Scientific discovery should be driven by curiosity, not profit,” he declares. “Lasers weren’t invented just so that they could be used for cosmetic surgery; that particular usage was only discovered afterwards.”

Like most teenagers, Amr isn’t all that concerned about things like research funding, or the influence of paranoid governments on the general direction of global technological advancements, but that’s not surprising considering Amr is, well, a lot like most teenagers. After repeated prodding by this reporter for some zany science anecdotes, the 18-year-old frowns, “It’s not like I spend my free time conducting experiments, or anything like that.”

Nor does he spend his time with his head buried in textbooks (“I’ll read a science book only if it’s funny,” he says, cryptically). His interests are either typical — “I go to the movies, hang out with friends,” he says — or quirkily specific. “A cat is a cat is a cat,” he says. “But I can break down all sorts of spiders for you.”

A normal teenager with a head full of questions, what distinguishes Amr from his peers is that, should he be announced one of YouTube SpaceLab’s two winners, he’ll get to see a small part of his curiosity sated on the grandest of scales. And also, on YouTube.

Another way Amr stands out is through his sheer optimism. A quick glimpse at his Twitter feed (he urges readers to get in contact with him at @amrmmohamed) reveals a long list of positive messages and general statements of encouragement.

Amr’s optimistic outlook extends to his views on post-revolutionary Egypt and its national standing among the global scientific community.

“Our current disappointment comes from having really high expectations that haven’t been met,” he says of both the revolution and the pace of Egyptian progress. “But we cannot lose faith. The moment you lose faith, you betray yourself, and whatever it is you believe in.”

Which, needless to say, is exactly the type of attitude required for a competition such as YouTube SpaceLab. The first prize also includes the choice between either traveling to Japan to witness the launch of the shuttle that will deliver the experiments to the International Space Station or attending a cosmonaut training camp in Star City, Russia — definitely the cooler of the two options, according to Egypt Independent.

“I haven’t decided yet,” Amr says, stubbornly, indicating that he still needs to win the competition.

Later this month, Amr and the other five finalists will meet in Washington DC, where they will get to enjoy a series of special activities, including a Zero-G flight, before the final awards ceremony on 22 March. 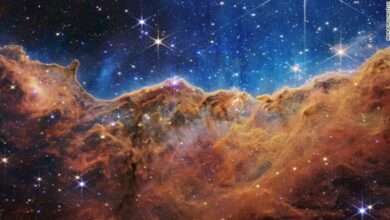