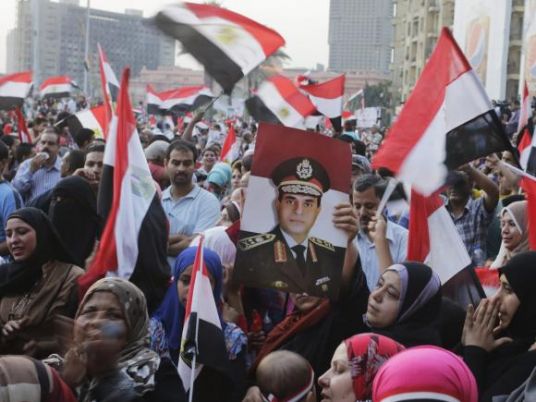 Egyptian satisfaction with general performance jumped to 65 points out of 100, compared to 55 in September 2017, according to a poll conducted by the Egyptian Center for Public Opinion and Research Baseera.

The poll was conducted in March a few days before the presidential elections of 2018. The poll was based on the assessment of Egyptians on 29 items in different political, economic and social aspects in the country.

The general performance index is lower in urban areas at 63 points compared to 66 points in rural places, while there was no noticeable differences between males and females.

Moreover the age and education factors played a pivotal role in the results as young respondents were notably less satisfied with general performance, with an average satisfaction 59 points among respondents less 29 years old while the figure surged to 71 points among people aged over 50.

Satisfaction among highly educated Egyptians reached 61 points compared to 67 points of people who are less educated.

The poll said that Egyptians are highly satisfied with four things in the country including the availability of fuel at 82 points, foreign relations with other countries at 82 points, security at 81 points, and 81 points for electricity which jumped from 61 in September last year.

The three items that received the lowest satisfaction among respondents include prices which received 42 points, employment at 40 points and the improvement of the standard of living for low-income citizens at 40 points.

The poll mentioned that “combating corruption” marked the highest increase in public satisfaction compared to indices last year as it rose to 65 points compared to only 33 in September 2017.

The poll, which was self-funded by Baseera, was conducted using landline and mobile phones on a sample of 1521 Egyptians, between respondents aged 18 years and over, covering all the governorates of the country.

The interviews were conducted between March 7 and 12.

The response rate was about 44 percent, with a margin of error less than 3 percent.

Why is there low youth turnout in the 2018 presidential elections?