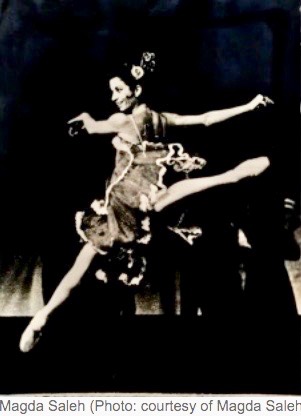 Legendary Egyptian ballerina Magda Saleh will be honored in New York in a special screening of two documentaries about the history of Egyptian dance accompanied by panel discussions in which Saleh will participate.

New York-based dance and theater troupe “From the Horse’s Mouth” will celebrate its 20th anniversary in a special event titled “A footnote in Ballet History?”, scheduled for March 13 and 17.

A documentary with the same name will premier on March 13 followed by a panel discussion. On March 17, “Egypt Dances”, a documentary from 1977 narrated by and starring Saleh, “travels the length and breadth of Egypt to create a visual record of the numerous indigenous dance forms throughout the country,” according to a press release.

“Viewers will have a unique opportunity to witness traditional folk dances such as the Haggala dance of the Arab Gharb Bedouin, the Zaggaleen of Siwa Oaisis, the dancing horses of Giza, the dances of the Fadigga Nubians of Aswan, and much more. Ancient, traditional, and folkloric choreography are explored,” the presser read.

Following the screening a discussion with Saleh will take place.

In addition to honoring Saleh, several performances will take place during the event featuring Egyptian and non-Egyptian dancers such as founder of the Cairo Modern Dance Theater Walid Aouni, performer and teacher of Egyptian folkloric dance Yasser Darwish, and Catherine Batcheller, principal of the Royal Birmingham Ballet and Stuttgart Ballet.

Upon graduating from the prestigious Bolshoi Academy of Ballet in Moscow, Magda Saleh made her name as the prima ballerina of the Cairo Ballet Company, which was created in 1966 by the Egyptian Ministry of Culture. She became the Dean of the Higher Institure of Ballet and then went on to become the founding director of the New Cairo Opera House-National Cultural Center.

She was also Egypt’s first ballerina and recieved several scholarships, awards, honors and distinctions, including the Order of Merit from President Gamal Abdel Nasser. She was invited to perform with the Bolshoi Ballet in Moscow and the Kirov Ballet in Leningrad by the Soviet culture ministry and represented Egypt in several organizations, including Conseil International de la Danse and the International Theater Institute, and UNESCO.

Saleh currently lives in New York and continues to promote Egyptian culture in the USA and the Middle East.

First ballet show in Minya to be performed Thursday