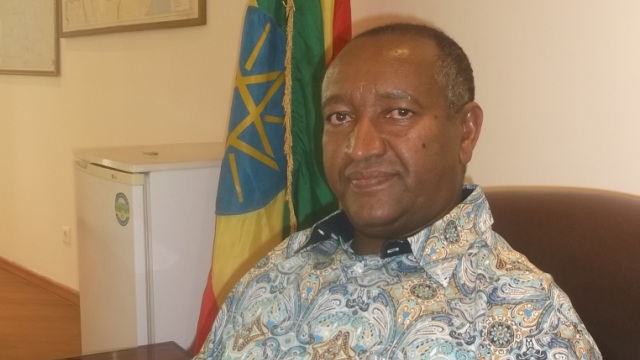 The Ethiopian ambassador to Sudan Mulugeta Zewdie suggested that Egypt is turning the dispute over the Grand Ethiopian Renaissance Dam (GERD) into a political issue, which he said is a technical matter.

In an interview with the Sudanese daily newspaper Sudan Vision, Zewdie accused some parties of transforming the GERD from a technical issue into a political issue, calling for political issues surrounding the dam to be avoided and to concentrate on the technical side set by experts from the concerned countries.

He expressed his surprise over the negative statements from Egyptian media outlets regarding GERD, describing the statements as an attempt to create agendas which are far from the reality.

Zewdie added that the negative statements and deliberations are expected but will vanish after the completion of the dam as they will be considered out of date after the people reap its fruits.

He said that the GERD crisis started when agendas were transformed into political issues, adding that Ethiopia will not halt construction as long as the joint technical committees are dealing with it technically and not politically.

He affirmed that Ethiopia does not mean to harm any neighbouring state among Nile Basin countries, but is meant to serve the country’s interests as well as the interests of other countries in the basin.

Zewdie also said that Sudan’s support is not out of sympathy with Ethiopia or to adopt a negative stance for the sake of it but to serve its own interests after Sudanese experts concluded that Sudan will have its complete quota of water after the dam’s construction.

Ethiopia Prime Minister Hailemariam Desalegene said on Saturday that his country will not accept any arbitration by a third party.

Desalegene’s remarks are seen as a retraction of recent statements he made regarding the possibility of including the World Bank as a neutral party in the negotiations.

“Seeking professional support is one thing; transferring it to an institution is another thing. So we told them that this is not acceptable with our side,” Desalegene said.

We will not endanger the lives of Egyptians: Ethiopian PM