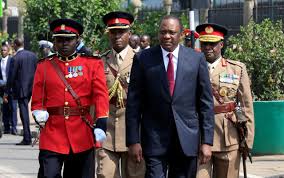 Observers found some technical problems but no evidence of vote-rigging in Kenya’s presidential election last month, the European Union said on Thursday, based on random checks of tallies from polling stations.

The finding was announced as Kenya gears up for a re-run of the contest between President Uhuru Kenyatta and challenger Raila Odinga on Oct. 17, after the Supreme Court nullified Kenyatta’s victory citing irregularities in the tallying process.

Credible elections would boost Kenya’s role as East Africa’s richest economy and a stable Western ally in a region roiled by conflict. But problems with the vote could spark unrest: 1,200 people died in violence after a disputed 2007 election.

Bolstering the Supreme Court’s findings of technical irregularities, the EU said in a statement it had examined 1,558 randomly selected scanned polling station results forms from 82 constituencies. A small percentage were unreadable, others had mathematical mistakes, and others were missing data or signatures.

The country had nearly 41,000 polling stations and 290 constituencies.

Odinga alleged that the original vote was marred by fraud and is threatening to boycott the re-run unless some demands are met, including the resignation of key election board officials.

But the EU said it did not find anything indicating deliberate manipulation of the vote in the forms it examined. “There was little variation in the patterns of anomalies … and no obvious advantage to one camp or another.”

However, the observers noted that more than a quarter of polling stations were severely late in posting their manually completed tallying sheets online. In some cases they only did so after the legal deadline for the opposition to mount court challenges to the results had passed, they noted.

The EU urged the election commission to use standardized forms with security features like serial numbers to reduce the opportunities for confusion in the upcoming polls.

It said the electoral board must do a better job of publicly explaining the processes it would follow in tallying the vote.

In a separate development on Thursday, ruling party lawmaker Ngunjiri Wambugu filed a court petition seeking to have Chief Justice David Maraga removed for gross misconduct in connection with the annulment of the election.

“Chief Justice Maraga needs to be censured, I believe he has participated in gross misconduct, which is unprofessional. I believe that gross misconduct is trying to influence a presidential election,” Wambugu told reporters.

Observers in the spotlight ahead of Kenya’s election re-run