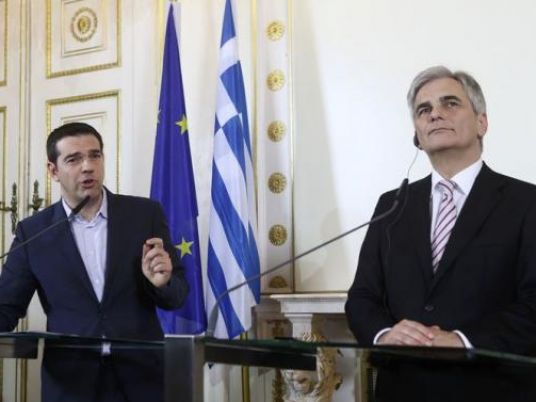 Greece and its euro zone partners engaged in brinkmanship on Monday, with leftist Prime Minister Alexis Tsipras insisting his country would not extend its reform-linked bailout and Germany saying it would get no more money without such a program.
European Commission President Jean-Claude Juncker warned Greeks not to expect the euro zone to bow to Tsipras' demands in a growing confrontation which spooked financial markets and prompted US and Canadian pleas for calm and compromise.
Escalating the rhetoric, Greece's finance minister said the euro zone could collapse "like a house of cards" if Athens were forced out.
A Greek finance official said he did not believe Juncker, IMF chief Christine Lagarde or German Chancellor Angela Merkel would let Greece go bankrupt, but Merkel said Greece needed to come up with a sustainable proposal.
"I think what counts is what Greece will put on the table," Merkel said at a news conference in Washington.
Tsipras set out plans on Sunday to scrap Greece's "cruel" austerity program, ruled out any extension of its 240 billion euro (£178.7 billion) EU/IMF bailout, which runs out at the end of this month, and vowed to seek reparations from Germany for World War Two.
His uncompromising maiden policy speech to parliament triggered a further slide in Greek bank stocks to near record lows and a sharp spike in government bond yields, sending wider jitters around Europe's financial markets.
Visiting Austria on Monday, Tsipras said he was confident of striking a compromise with European partners in the coming days and renewed his appeal for a "bridge" arrangement until June to allow time to negotiate a restructuring of Greece's debt.
Red lines
A senior finance ministry official in Athens told reporters that restructuring the debt and lowering the targeted primary budget surplus, before debt service payments, were among Greece's non-negotiable "red lines" for any EU negotiation.
Germany, the euro zone's main paymaster, has insisted the radical new Greek government must respect commitments made by its conservative-led predecessor.
German Finance Minister Wolfgang Schaeuble said if Athens wanted a bridging deal, it would need an internationally supervised reform program.
"Without a program, things will be tough for Greece. I wouldn't know how financial markets will handle it without a program — but maybe he knows better," Schaeuble told reporters at a G20 meeting in Istanbul, referring to Tsipras.
In a sign of mounting international concern, British Prime Minister David Cameron held a special meeting with finance ministry and Bank of England officials to plan for a possible Greek exit from the euro zone, a Treasury source said.
Greek Finance Minister Yanis Varoufakis, who found scant support on a tour of European capitals last week for his ideas for a debt exchange, angered euro zone partners by telling Italian television on Sunday the 19-nation single currency area would ultimately collapse if Greece were forced out.
Juncker told reporters on a visit to Germany, "Greece should not assume that the overall mood has so changed that the euro zone will adopt Tsipras's government program unconditionally."
The EU executive chief said he did not expect a deal on the way forward with Greece at an EU summit on Thursday or a prior meeting of euro zone finance ministers on Wednesday.
No reparations
German Vice-Chancellor and Social Democratic Party (SPD) leader Sigmar Gabriel rebuffed Tsipras' call for reparations over the Nazi occupation of Greece, saying such matters had been finally dealt with in major power negotiations that led to German unification in 1990.
Asked whether Berlin would pay compensation, Gabriel said: "The probability is zero."
Greek financial markets sank further on Monday after credit ratings agency Standard & Poor's cut Athens' rating on Friday.
Government bond yields rose by up to 3.7 percentage points, with three-year yields nearing 22 percent. The soaring rates mean Greece is shut out of capital markets. [ID:nL5N0VJ3NQ]
Despite calls for compromise from European leaders, Tsipras rattled off a list to parliament of moves to reverse reforms imposed by EU and International Monetary Fund lenders, telling deputies he would reinstate pension bonuses, cancel a property tax, end mass layoffs and raise the minimum wage.
Juncker said Tsipras had taken "only limited account" of EU suggestions on the way forward in the debt crisis. Brussels has been pressing Athens to request an extension of the bailout program for a few months to allow time for negotiations on easing the debt burden in exchange for economic reforms.
A senior euro zone official said the two sides were not much closer to a solution. There appeared to be "a very dogmatic attitude in Athens", fuelled by Varoufakis' incendiary interview and by the role of investment bankers Lazard, which is advising Greece on the debt issue, the source said.
US Treasury Secretary Jack Lew told US broadcaster CNBC, "Everybody's got to tamp down the rhetoric a little bit."
Washington has raised pressure on the euro zone to compromise with Greece, irritating Germany. US President Barack Obama, hosting Merkel on Monday, said he was looking forward to hearing from her how Europe and the International Monetary Fund could work with Athens to return Greece to sustainable growth within the euro zone.
Canadian Finance Minister Joe Oliver also called on both sides "to arrive at a compromise solution".