Brennan says he can’t say whether there was collusion during the U.S. presidential election between Russia and Donald Trump’s campaign, but he knew there was reason to have investigators “pull those threads” 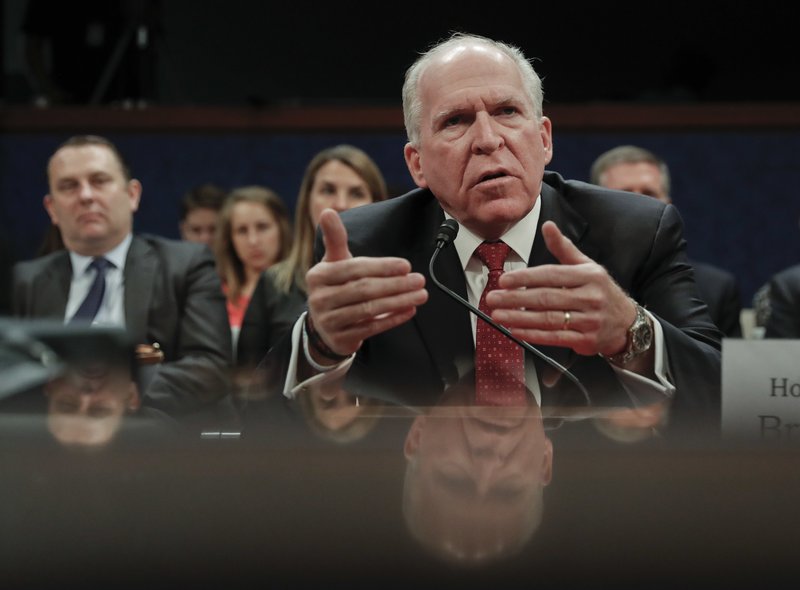 In the latest on investigations into Russia’s alleged interference in the 2016 U.S. election, former CIA Director John Brennan has told Congress he was so concerned about Russian contacts with people involved in Donald Trump’s campaign that he convened top counterintelligence officials to focus on them.

He says he personally warned Russia last summer against interfering in the U.S. presidential election.

Meanwhile, a Senate committee has issued two additional subpoenas to businesses of ousted Trump National Security Adviser Michael Flynn, one of several key figures in the Russia-Trump campaign probe, and sent a letter to his lawyer questioning his basis for claiming a Fifth Amendment right not to provide documents. The letter also narrows the scope of the documents the panel is seeking.

Senate Intelligence Committee Chairman Richard Burr says the panel may consider a contempt-of-Congress charge if there is no response from Flynn.

The Senate intelligence committee is seeking a narrower batch of documents and information from former National Security Adviser Michael Flynn than the panel initially sought in a subpoena.

That’s according to the committee’s Republican chairman, Sen. Richard Burr of North Carolina. Burr says the committee is “very specific” about what it’s asking in an attempt to pressure Flynn to turn over documents.

Flynn’s attorneys had argued the request was too broad, saying if he complied, he would effectively be providing testimony that could be used against him. They made the argument Monday when Flynn invoked his Fifth Amendment protection and declined to cooperate with a May 10 subpoena.

That document had asked him to provide a wide array of records regarding his contacts with Russians and Russian business interests.

Meanwhile, the Senate intelligence committee says it will subpoena two of former national security adviser Michael Flynn’s businesses. The committee has already subpoenaed Flynn for documents regarding his contacts with Russian officials during the 2016 presidential campaign. Flynn has refused to hand over that information.

The committee also sent a letter to Flynn’s attorney Tuesday questioning the legal basis of Flynn’s decision to invoke his Fifth Amendment right over a request for documents rather than testimony.

Committee Chairman Richard Burr says senators will wait for Flynn’s response to Tuesday’s requests before they decide the next course of action, including the possibility of a contempt of Congress citation.

Former CIA Director John Brennan says he can’t say whether there was collusion during the U.S. presidential election between Russia and Donald Trump’s campaign, but he knew there was reason to have investigators “pull those threads.”

Brennan was President Barack Obama’s CIA director. He told Congress Tuesday he personally warned Russia last summer against interfering in the election and was so concerned about Russian contacts with people involved in the Trump campaign that he convened top counterintelligence officials to focus on them.

The FBI and congressional committees are investigating such contacts.

President Trump has predicted the investigations won’t find collusion, but his efforts to cast doubt and curb the probes have led to the appointment of a special counsel at the Justice Department.

Brennan says he thinks Russia cooperates with WikiLeaks through middlemen.

Brennan told the House intelligence committee on Tuesday that Russia has used intermediaries to work with the WikiLeaks anti-secrecy group. The website released material hacked from email accounts of the Democratic National Committee and Hillary Clinton campaign officials during last year’s presidential campaign.

He says that if someone tracks WikiLeaks’ releases over time, it’s clear that they are often timed to coincide with certain events or to undermine national security.

He also says that before sharing such classified intelligence with foreign partners, the U.S. would go back to the intelligence partner that provided the information to make sure what was shared would not compromise operatives.

From “The Latest on investigations into Russia’s alleged interference in the 2016 U.S. election;” AP

Trump campaign had at least 18 undisclosed contacts with Russians: sources