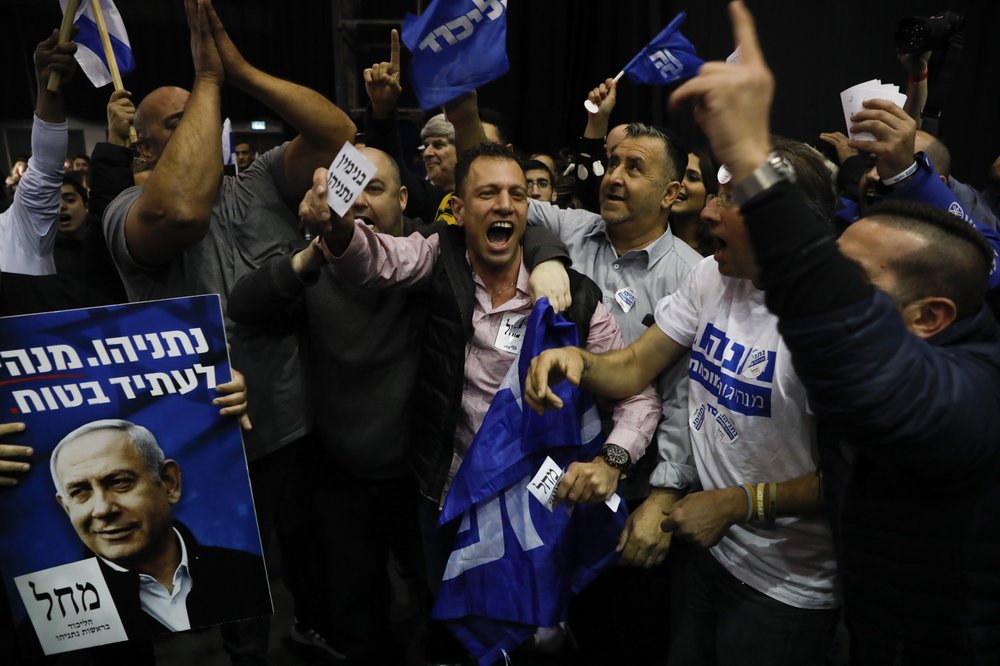 JERUSALEM (AP) — Prime Minister Benjamin Netanyahu’s Likud Party emerged as the largest party in the country’s third election in under a year, exit polls indicated, but it was unclear whether the embattled Israeli leader could secure a parliamentary majority as he prepares to go on trial for corruption charges later this month.

Exit polls on Israeli TV stations appeared to show Likud and its smaller ultra-religious and nationalist allies had captured 59 seats in Monday’s vote, two short of the majority required to declare victory.

His opponents were projected to get a majority of 61 seats. But with his main challenger, the centrist Blue and White party, trailing Likud by several seats and the rest of the opposition fragmented, polls were pointing to a continued paralysis of Israel’s political system.

Official results slowly trickled in overnight and by early Tuesday morning about 14% of the ballots had been counted.

Addressing a raucous crowd of thousands of ecstatic supporters at 2:30 a.m., Netanyahu claimed a “giant victory.”

“This is a victory against all the odds, because we stood against powerful forces,” he said. “They already eulogized us. Our opponents said the Netanyahu era is over.”

He vowed to immediately begin work to form a new coalition and press forward with a hardline agenda that includes annexing large parts of the West Bank — a step that would destroy any remaining hopes of establishing a Palestinian state.

Despite the wild celebrations, Netanyahu could have difficulties forming a new government. After initially predicting that the prime minister was on the cusp of victory, exit polls projected a tight race that appeared to leave him short of the parliamentary majority he covets.

If official results match the exit polls, Netanyahu could go on trial March 17 weakened and stuck in political gridlock.

Netanyahu was indicted in November on charges of fraud, breach of trust and accepting bribes, making him the first sitting prime minister to be charged with a crime. He denies any wrongdoing and says he is the victim of a witch hunt by police, prosecutors and a hostile media.

During the campaign, Netanyahu failed in a bid to secure immunity from prosecution. As prime minister, he could still rally public opposition against prosecutors and judges in the case. He also could seek other avenues to delay or derail the proceedings against him.

Aviad Glickman, the legal affairs correspondent for Channel 13 TV, said that if Likud emerges victorious, Netanyahu’s lawyers will likely seek to delay the trial. He also said there are serious concerns in the legal system that if Netanyahu secures another term, he will try to fire his attorney general, who filed the indictment against him, and push for legislation that would allow parliament to strike down Supreme Court rulings it opposes.

A Likud victory could also force the court to rule on Netanyahu’s future. An advocacy group, seeking to oust Netanyahu, earlier this year asked the court to rule whether an indicted parliament member can be designated prime minister and asked to form a new government.

The Supreme Court in January declined to rule on the request, saying it was premature. But the issue could come up again if President Reuven Rivlin formally taps Netanyahu to form a new government.

After elections, the president is responsible for picking a prime minister and forming a majority coalition. He usually chooses the leader of the largest party, but it’s not required, and the decision has been complicated by Netanyahu’s trial.

After September’s election, both Netanyahu and Gantz, a former military chief, were given opportunities to form coalitions. Both failed. With Likud projected to be the largest party, Netanyahu could again get first crack at assembling a coalition this time around.

If the final results hold up, the easiest way out of the impasse would be a unity government between Likud and Blue and White, which together command a solid parliamentary majority. Gantz, however, has ruled out a partnership as long as Netanyahu remains in charge. Netanyahu insists on remaining prime minister in any unity deal.

Addressing a crowd of enthusiastic supporters early Tuesday, Gantz did not concede defeat.

“This wasn’t the outcome that perhaps we would have wanted,” he said. Nonetheless, he said the party would not compromise its principles and would wait for final results.

Avigdor Lieberman, a former Netanyahu ally turned rival, appeared to once again emerge as the key player in coalition talks.

Lieberman has refused to endorse either major candidate, potentially giving him the final say in who controls a parliamentary majority. Lieberman, who opposes Netanyahu’s alliance with ultra-Orthodox religious parties, has said he will not allow a fourth straight election.

A weary-looking Lieberman vowed to stick to his principles and said he would take stock once the final results are in. “We won’t move a millimeter from what we promised our voters,” he said.

The election marked another setback for the once mighty Labor party, which governed the country for its first three decades. The party’s alliance was projected to get just six or seven seats, making it one of the smallest factions in parliament.

Addressing his supporters, party chairman Amir Peretz accused Gantz of cannibalizing Labor in a hopeless bid to emerge as the largest party.

Ayman Odeh, leader of the predominantly Arab Joint List, criticized Gantz for ruling out a partnership with his party.

“The problem was Blue and White’s racist attitude,” Odeh said, accusing Gantz of turning Blue and White into a “pale imitation” of the right wing. Noting that the Joint List was projected to capture an impressive 14 seats, Odeh said: “We did our part. They failed.”

Continued deadlock could potentially force the country into another election.

Netanyahu, the longest-serving leader in Israeli history, has been a caretaker prime minister for more than a year as a divided country has weathered inconclusive votes in April and September and prolonged political paralysis.

After opinion polls repeatedly showed the two rivals deadlocked, or with Gantz holding a slight lead, Likud began to edge ahead over the last two weeks or so.

Netanyahu sought to portray himself as a statesman who is uniquely qualified to lead the country through challenging times and boasts important relationships with world leaders, most critically, President Donald Trump. During the campaign, Trump unveiled a Mideast plan that is strongly favorable to Israel in a step that was seen as an election gift to Netanyahu.

With his career on the line, Netanyahu campaigned furiously. He took a hard turn to the right in hopes of rallying his nationalist base, promising to expand and annex West Bank settlements.

In a campaign marked by ugly smears, Netanyahu’s surrogates spread unfounded allegations that Gantz is corrupt, unstable and susceptible to blackmail by Iran.

But the candidates seemed to agree on one thing: The country cannot hold another election.

Israelis vote in 3rd election in a year focused on Netanyahu