Landscape architect Phil Dunn has taken on an ambitious challenge. For one year, he is basing his diet on food grown in his local community, in an effort to highlight the issues of food sustainability and food waste.

A resident of Dubai’s Sustainable City neighborhood, Dunn calls the experiment he began last November “The Sustainable Human Project.” “(It) is a combination between a personal challenge for my 49th birthday and a project exploring food security and urban farming,” he tells CNN.

Dunn — a Canadian national — plans to create a small-scale example of a circular economy — aiming to produce, consume and recycle locally. It’s made much easier by the fact that he lives in a community purpose-built to promote a sustainable lifestyle.

As well as more than 500 houses, the Sustainable City is home to 11 biodome greenhouses, where the community’s management grows up to one million pots of leafy produce annually, including chives and chicory. The produce is given to residents or sold at local markets.

Residents can also catch fish at the community tank, breed chickens that provide them with eggs, and rent private plots in communal gardens to grow their own produce. Here, Dunn cultivates cherry tomatoes, lettuces and radishes.


For produce that cannot be grown at the Sustainable City, such as olive oil, rice and sugar, he’s bartering with other residents. In exchange for those foods, Dunn supplies products he has made from recycled wood left over from his gardening work.

“Following a circular economy idea, I turned construction wood into urban farming tools like planters and water tanks, so I can trade with the residents,” he explains.

The idea of a circular economy is based on reusing and recycling products and materials used for things like food production, transport and clothing. The sector could generate $4.5 trillion of global economic growth by 2030, according to research by Accenture.

The UN estimates that globally, 1.3 billion metric tons of edible food is lost each year. By eating food grown in the community, Dunn wants to avoid the waste associated with commercial production and transportation.

“I thought it was more about gardening,” Dunn says of the project, “but it’s really about growing a community. It’s been a fantastic experience of social building. For circular economy, it’s so important everybody reduces, re-uses and recycles.” 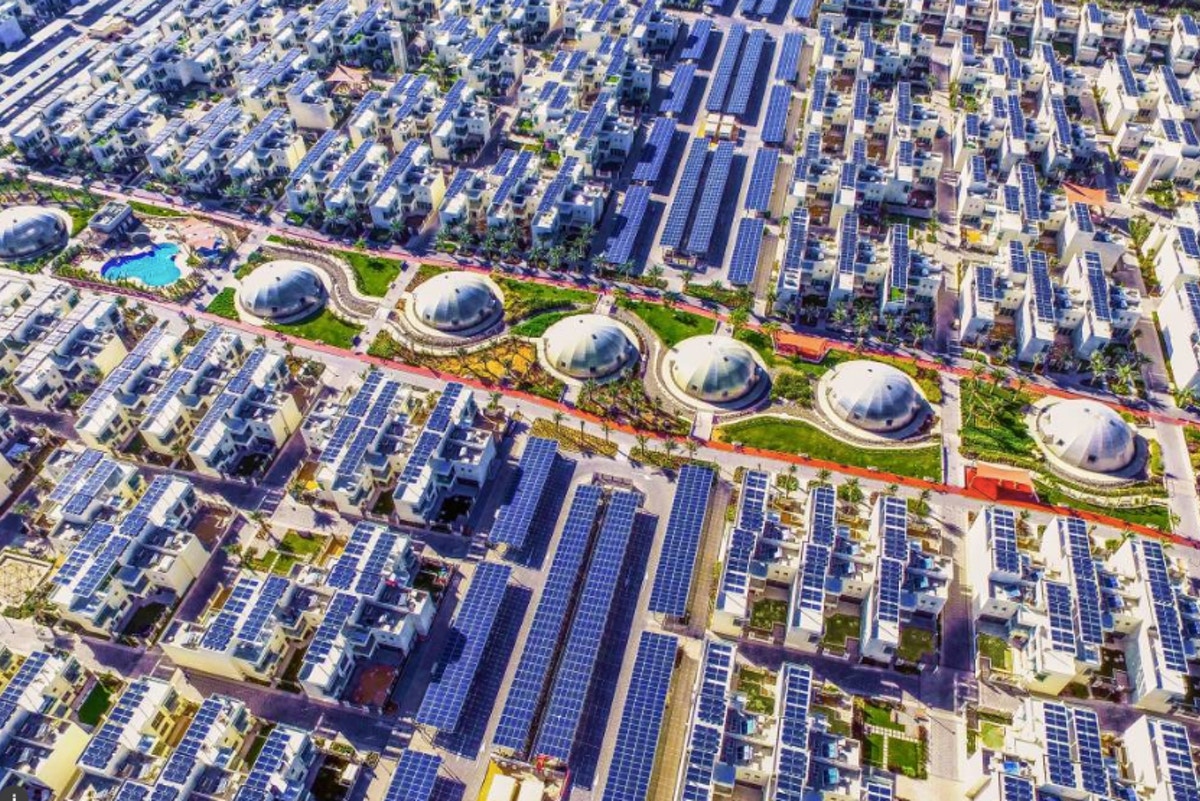 An aerial view of The Sustainable City development in Dubai. Image: Diamond Developers

Established in 2015 by Dubai-based Diamond Developers, the Sustainable City extends over 46 hectares in the outskirts of Dubai. The emirate’s first net zero-energy development, it is meant to foster a community around social, environmental and economic sustainability.

It is surrounded by 2,500 trees serving as a buffer zone to protect the community from pollutants, offers 3,000 square meters for urban farming, and powers all its buildings and parking lots using solar panels.

The Sustainable City is testing out new technologies that can help establish a circular economy, including vertical farms — a way of growing food indoors, without soil and typically using LED lights instead of natural light.

“We’ve seen a quantum leap in indoor vertical farming,” says Karim El-Jisr, chief sustainability officer at Diamond Developers. “It’s about controlling the climate, controlling the light with the least amount of energy. This is where technology comes in and why it’s so fitting to do this in cities.”

The Sustainable City is also introducing electric car-sharing for all residents and it’s exploring prototype projects to harvest humidity and make water out of the air. El-Jisr says cities are full of spaces, such as rooftops and basements, that can be repurposed to play a role to play in the circular economy.

As well as reducing waste, growing food in cities can improve food security. The UAE imports around 90 percent of its food, and solutions like the ones adopted within the Sustainable City could help towards food independence.

While Dubai still has a long way to go, Dunn’s goal is to raise awareness around food production.

“I hope this challenge is a catalyst for others to start taking control of where their food is grown, understand local food systems and to explore local production,” he says.

Ration cards for rice in Egypt sufficient for 6.6 months, yet shortage persists in general market