Foreign Minister Mohamed Kamel Amr criticized the Quartet on the Middle East’s role in the regional peace process, calling it “a total paralysis” and reiterating Egypt’s condemnation of Israeli settlement activities as a blow to the two-state solution for the Palestinian-Israeli conflict.

A ministry statement Monday quoted Amr’s remarks, which he made during a ministerial meeting Sunday by the Arab Peace Initiative follow-up committee in Doha.

Amr expressed Egypt’s congratulations to Palestinians on the United Nations’ historic decision to grant Palestinians observer status. He added that the resolution requires joint Arab support for the Palestinian state and the provision of a financial security network that would counter any economic and financial fallout from the UN decision.

The foreign minister said the international community’s submissiveness to Israeli settlement policy would undermine the two-state solution. Amr leveled scathing criticism of the world’s policies on regional issues, and of the Quartet, whose member entities are the United Nations, the European Union, the US and Russia.

Amr stressed the need for brainstorming creative ways to push the international community to get actively engaged in solving the Palestinian issue. He said the eventual goal is to give Palestinians their legitimate rights, foremost among them being the establishment of an independent state on the June 1967 borders, with East Jerusalem as its capital.

Amr stressed the importance of achieving reconciliation between Palestinian factions, and reiterated Egypt’s interest in that goal. 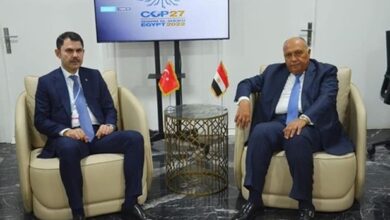