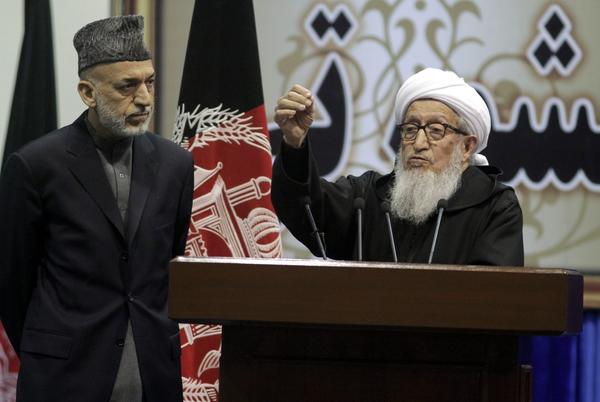 KABUL, Afghanistan (AP) — Afghanistan’s first president following the withdrawal of Soviet troops from the country and the collapse in 1992 of Kabul’s pro-communist government, Sibghatullah Mojaddedi, has died. He was 93.

The white-turbaned and soft-spoken Mojaddedi was a mentor to former President Hamid Karzai, who had belonged to his anti-communist resistance group during the 1980′s Soviet invasion of Afghanistan.

Mojaddedi’s guerrilla group — the US-backed Afghan National Liberation Front — was perhaps the smallest and most moderate of guerrilla groups fighting to oust the former Red Army from Afghanistan.

The Soviet invasion came at the height of the Cold War between America and the former Soviet Union. The last Soviet soldier withdrew from Afghanistan on Feb. 15, 1989, ending a 10-year invasion that had failed to defeat the US-backed anti-communist guerrillas who were known at the time as mujahedeen, or holy warriors.

President Ronald Reagan called the mujahedeen freedom fighters. Some later became the Taliban while others were known as warlords who later turned political leaders in Afghanistan. Some rights activists have accused the warlords of fomenting Afghanistan’s post-2001 decline, contributing to the nation’s insecurity and widespread corruption.

Following the collapse of the communist government, Mojaddedi in 1992 served for two months as Afghanistan’s president in line with an agreement signed in Mecca, Saudi Arabia, by the leaders of all the mujahedeen groups who had fought the former Soviet Union.

Mojaddedi stepped down as he said he would, according to the agreement, but his successor, Burhanuddin Rabbani, who was to serve for four months, instead hung on to power for four years. The agreement broke down and a brutal war between rival mujahedeen groups engulfed the Afghan capital of Kabul, killing tens of thousands of mostly civilians until the Taliban took power in 1996.

During the Taliban rule, Mojaddedi lived outside of Afghanistan and returned to the country following the US-led invasion in 2001 that drove the Taliban from power. He served as head of the first post-Taliban Loya Jirga, the 2,500-member council of elders or “grand gathering” that eventually crafted Afghanistan’s current constitution.

He also briefly served as head of the government High Peace Council tasked with trying to find a peaceful end to Afghanistan’s war.

An ethnic Pashtun from Kabul, Mojaddedi came from a deeply respected religious family, who often advised former Afghan kings on matters of religion.

“He was always seeking peace and stability for Afghanistan, but he died before he could see his wish fulfilled,” said Attaulrahman Salim, deputy head of the peace council. “We are still a country at war.”

Unease over US exit in Afghan valley where Soviets retreated